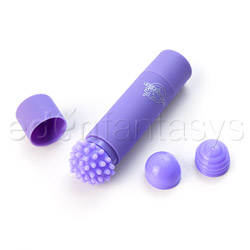 A Rocket in your Pocket

If it was a bit stronger and used normal batteries, this toy would be awesome. However, an unusual size-N battery and a lack of oomph make the 3-way pocket vibe lackluster. Despite how it feels when you hold it, the vibrations feel buzzy and shallow, and they lack penetrating power. The variety of tips do make interesting sensations for teasing. It will do the job; it just takes a bit of effort.
Pros:
Discreet, Quiet, Cute pouch, Easy to use
Cons:
Somewhat weaker than I expected, Eats batteries
Rating by reviewer:
3
extremely useful review

The toy comes with three soft, textured tips. It also comes with a plastic cover for when it's not in use. 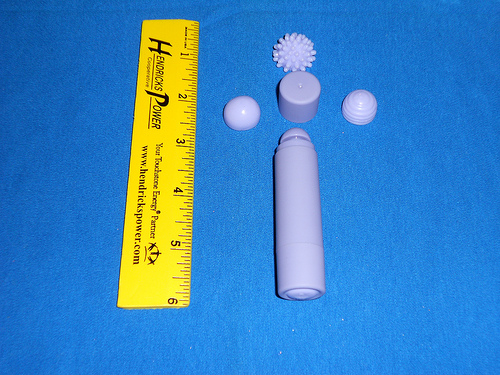 This pocket rocket is made of plastic, and it comes with a set of TPR tips that slip over the hard plastic vibrating nub at the end. If you're planning to rub it against your skin, you'll want some water or silicone based lubricant, because the tips tend to stick and drag. The plastic case itself is hard and easy to hold. There is no noticeable scent or taste on either pieces. Everything is very smooth, with barely any edges or seams from manufacturing on any of the pieces.

The 3-way pocket vibe looks like a large tube of chapstick, especially with the plastic storage cap placed on the end. It's small and easy to hold, and it's very discreet. You could easily leave it out on a nightstand, and no one would notice it. Also, it comes with a cute, velvet-like pouch that is big enough to hold the vibrator, a couple of spare batteries, and the tips. The pouch itself has no markings on it, so no one would be able to tell what was in it. I've had mine hanging from the bedpost since I got it.

All of the vibrations are concentrated on the vibrating tip, which allows delivery of pinpoint vibrations wherever you want it. However, this pinpoint delivery is sometimes a bit too pinpoint. The vibrations don't really spread out from where you're touching yourself.

The pocket rocket comes with three squishy TPR tips. One is smooth, another has a ribbed stack of concentric circles, and the third is covered in small nubs. All three textures are noticeable when the tips are used. However, the TPR has quite a bit of drag when rubbed against your skin, so regardless of the tip, you'll probably want to use some lubricant if using this on your clit. The nubby tip, especially, can feel scratchy without sufficient lubrication. Also, the vibrations are somewhat weaker when using a tip since they have to penetrate through the plastic. 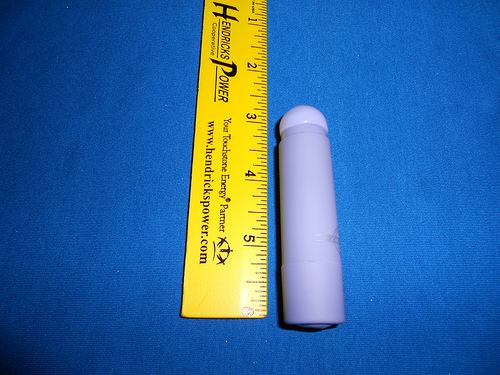 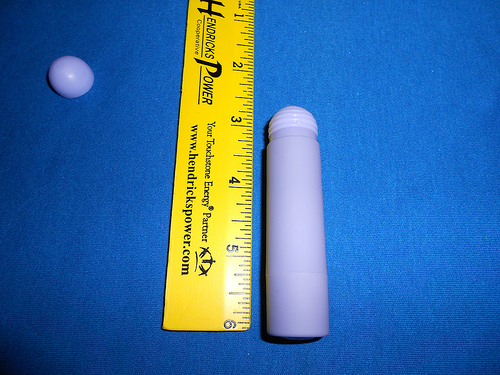 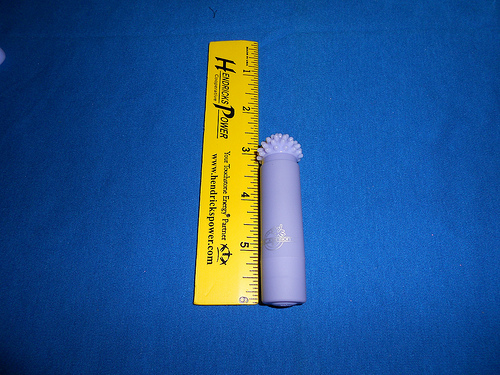 This toy uses a size-N battery, which can be hard to find. Fortunately, batteries are included when you purchase this toy, and you can buy the batteries directly from Eden if you can't find them at the store. The base of the toy unscrews to insert the battery. Inside the battery compartment is a piece of paper showing how to insert the battery. The base screws on tightly, and there's an o-ring inside that presumably would keep water out of the battery compartment while the toy is in use. However, it's easy to screw the base on too tightly, which can leave little cracks in the plastic. Also, when the battery gets low, the toy performance gets very sporadic, with it refusing to turn on sometimes and then changing its mind a few minutes later. So, rather than trying to tighten the base tighter or fiddling with the battery, just replace the battery to see if that makes the toy work again.

There's a soft button at the base of this toy which controls the vibrations. There's three settings: high, medium, and low. The button is easy to find and push during use. Since there's no separate power button, you have to cycle through the settings in order to turn it off, and it does not remember the last power level it was on. There's also no way to lock the power button on or off, so you would want to remove the battery before traveling with this toy. Leaving the battery in during storage doesn't seem to drain it, though.

This toy's vibrations are buzzy, and they don't penetrate very far, especially when using one of the provided tips. It's strong enough to do the job, but if you need strong vibration this toy isn't going to cut it. Also, it eats batteries like Cookie Monster eats cookies. Considering the unusual battery size, you may want to stock up to make sure you don't run out in the middle of playtime.

The pocket vibe is very quiet. You can barely hear it when it's turned on, even if it's not under the covers. The box fan in my bedroom is easily loud enough to drown it out. The toy is listed as waterproof, but because of the small cracks near the battery cover from where I over-tightened it, I haven't used the toy under water. I have, however, briefly immersed it while cleaning it and it held up just fine, so I am sure it would be fine in the shower if you wanted to try it.

The 3-way pocket vibe is made of plastic with removable TPR tips. As it's waterproof, the whole toy can be cleaned with soap and water, or even toy wipes. However, the tips need to be dried out with a q-tip or paper towel, because the hole is too small to let the water drain out easily when you wash them. Also, because of the toy's shape, you will want to use a q-tip or toothbrush to get under the mushroom-shaped vibrating head, as fluids can accumulate there during use.

This toy cannot be sterilized, and it might be a bit awkward to use a condom with it, so you most likely won't want to share it. As it's plastic, either water or silicone based lubes can be used with it.

The pocket rocket comes with a small, velvet pouch for storage. It's perfect for throwing in a drawer or hanging from the bedpost. 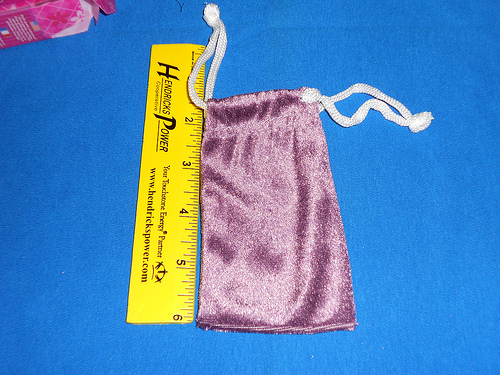 The 3-way pocket vibe comes in a cardboard box with a plastic tray inside holding all the parts. The package is not very discreet. There's no pictures on it, but it clearly says what it's for and you can see the product itself through the window. 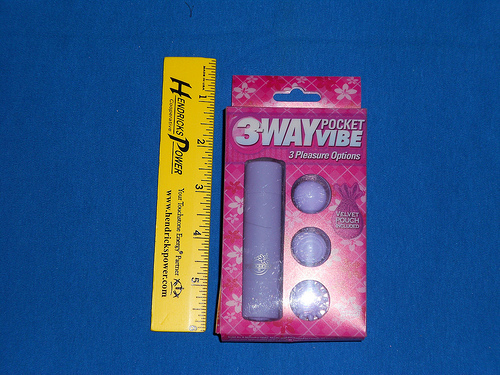 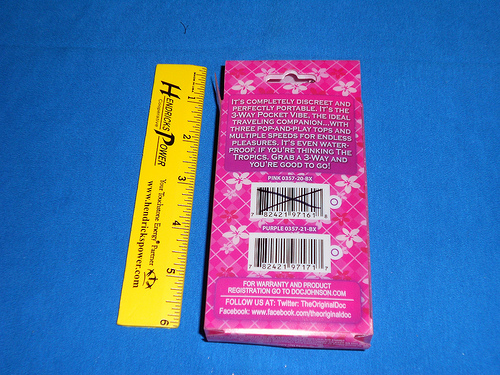 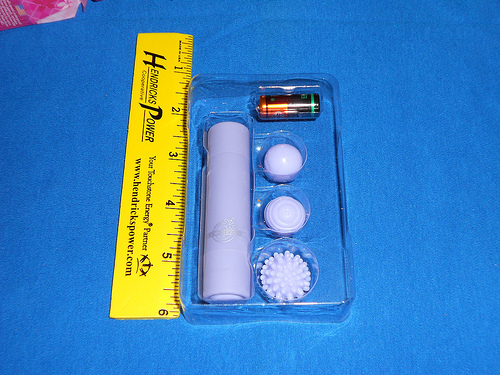 There are no actual directions in the box, but the toy itself is easy enough to figure out. The box, being cardboard, is recyclable, but I wasn't able to find a recycle symbol on the plastic tray.

I keep my 3-way pocket vibe in its pouch hanging from the bedpost, and it gets a decent amount of use when the batteries are fresh. I do have better toys to play with, including my bullet, but the pocket rocket is quick and convenient. In general, the ribbed tip is my favorite, but the nubby one is good for teasing and tracing the edges of erogenous zones.
Follow-up commentary   I still don't like it 7 months after original review
After getting a couple of other toys, including my Diamond Fairy, I've really found myself using this toy less and less. It's still hanging in its pouch, nice and convenient on my headboard, but it's just not worth the effort. Cleaning the little silicone tips is annoying, and the head of the toy seems to get built up gunk no matter how well I clean it. Also, the size N battery seems to be getting weak again, and I just don't feel like going off to replace it.

If I get a smaller bullet, I'll probably re-purpose this toy's pouch and and put the 3 way pocket vibe in the back of my toy drawer where it belongs.
This content is the opinion of the submitting contributor and is not endorsed by EdenFantasys.com