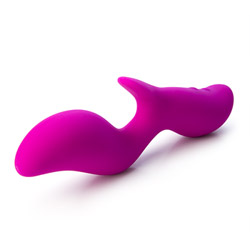 The Jopen Vanity Vr4 is an intriguing abstract rabbit-style vibrator. The shaft is ergonomic but very filling, and shaped just right for rocking against the g-spot. Unfortunately, the clitoral attachment is designed so that it can transmit little to no stimulation - most of the vibrations never leave the handle. With the outer motor turned off, the Vr4 makes a quite good g-spotting vibe; those who need more than an absolute minimum of clitoral stimulation will have to find it elsewhere.
Pros
Silicone, rechargeable, waterproof, ergonomic shaft, strong & deep motors, good controls.
Cons
Motor is in the handle, numbing hand instead of vibrating clitoris.
Rating by reviewer:
3
extremely useful review

The Jopen line is the most recent attempt by CalExotics to re-brand themselves as a maker of luxury toys. This time around, they did a very good job at not only concealing who designed the toys, but at actually developing a luxury line. The features we have come to expect, to require in a luxury toy are there - it's 100% silicone outer layer, rechargeable battery, and water resistant. The motors are relatively strong, with deeper vibrations. The designs are fresh, abstract, and lean towards ergonomic instead of hyper-realism or cutesy animals. They even gave the brand a European-sounding name, to fit in among some of the more well-established lines of luxury vibrators.

The entire surface of the Vanity Vr4 is covered in a layer of very matte silicone. A very matte, very bright fuchsia silicone, far brighter than the photos suggest. It easily has the most friction drag of any silicone I've ever tried, so a generous dollop of lube is recommended. The extra friction of the almost velvety silicone adds very little to the experience, as this texture disappears when the toy is well lubed. The toy had no odor, though the box itself held a faint scent of plasticizers.

The design of the Vr4 is a mixture of very good, and poorly conceived. The internal portion of the toy is based on the actual curvature of the average vagina, instead of a straight, unforgiving shaft. The large, smooth front bulge hugs the front wall of the vagina, pressing against the g-spot, while the tapered tip slips in behind the cervix and out of the way. (great for those with a tender cervix!) The motor is set in the g-spot bulge, where it can be easily rocked against the g-spot. It is a large toy, however, so beginners beware.

Unfortunately, the other half of the toy is not nearly as well designed. To begin with, the clitoral projection is simply a tongue-shaped flap of silicone. It's just rigid enough to hold it's shape when you shake it, but there is no motor inside it. The motor is actually inside the handle of the toy. Because of the softness of the clitoral tongue, any contact with skin dampens away the vibrations, even at the highest power level. Because the motor is in the handle, this toy quickly becomes hard to (pardon the pun) handle after a few moments. The toy vibrates exactly where you are forced to put your hand, and the motor is powerful enough to begin to numb up fingers within minutes, even on the lowest setting.

Because of the serious design flaws of the handle and clitoral portion, the Vr4 slips from being a great design to simply a passable design, as anyone who needs more than minimal clitoral stimulation will be left wanting.

Regardless of their well or poorly chosen positions, the motors used in the Vanity Vr4 are quite nice. They have a nice rumble to them, moderately deep vibrations with enough power behind them to get the job done. Still, even on the highest setting they are quiet enough that you don't have to worry about nosy neighbors hearing them through doors or thin walls, though a shower won't quite cover the buzz. The ability to control the motors independently is a nice touch; when they alternate back and forth, it gives the illusion that the vibrations are surging back and forth within the toy.

The controls are molded into the silicone. The placement is good, as they are out of the way, but easy to get to when you need them. They have a nice, satisfying click, so you know for sure that you got the darn button pressed. The buttons are lit from within, indicating which motors are on during use, and during charging. One oddity of the control system is that you do not simply click a button once to scroll up one option in the vibrations. You must press and hold the button to scroll through, from bottom to top. While it takes a little time to get used to, it allows for a very nice feature - a single quick press on either button instantly shuts off the motor. Anyone who has had to hide a vibrator quickly knows that instant-shutoff buttons are a wonderful addition to a toy.

The Jopen line is advertised as waterproof, yet rechargeable. At first inspection, the charging port doesn't look special; it just looks like your average hole to stick the adapter in. However, a closer look with a strong flashlight revealed that the back of the hole is covered in a thick disk of silicone with a tiny hole in the center. When the jack is pressed into the port, it forces this hole open. As the silicone is very stretchy, it easily accommodates the jack; when the jack is removed, the silicone springs back down, pressing against itself and preventing water from entering. The toy survived both simple cleanings and prolonged submersion in a sink, so its waterproof claims are safe to trust.

As the Vr4 is completely covered in silicone and waterproof, cleanup is easy. Your usual cleaning routine will work just fine for day-to-day cleansing, and a 10% bleach solution can be used to sanitize it for sharing. Do not boil this toy or place it in the dishwasher, as there are motors inside.

The silicone coating of the Vr4 does restrict the lubes with which it can be safely used. Water and oil based lubes will play nicely with the toy. Silicone based lubricants are generally incompatible with silicone toys, though some high-quality lubes are safe (I tested both Pjur Bodyglide and Sliquid Ride Silicone, and both were compatible). If you wish to use your favorite silicone lube with the Vr4, make sure to do a spot test in an inconspicuous part of the toy to make sure that it won't degrade the silicone.

As the silicone is inert, the Vr4 won't care too much how you store it. A very, very overly large cloth bag is included with the toy, more than large enough to hold the toy and wrap around it again twice. While it keeps the toy clean, it does tend to leave little black fuzzies on the grippy silicone surface, so a plastic bag may be a better storage option.

Vanity Vr3
$138.99
This product was provided free of charge to the reviewer. This review is in compliance with the FTC guidelines.