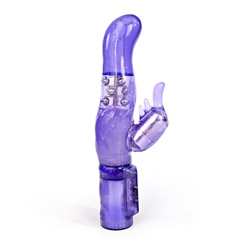 I do like the toy because when vibrating to give me an orgasm it is not stingy on material to reach the clit and the bulbous end which is inserted is big enough to make me feel good.I'm very happy with the Wild G. I tend to gravitate towards large toys, and this one is certainly large enough. Large enough to put a big grin on my face.
Pros:
The prongs, which are soft enough not to stick you, cover all the clit and the toy is large enough
Cons:
It is sticky when not lubed on the top 2/3.
Rating by reviewer:
3
extremely useful review

The best use for this toy is stimulation of the vagina and clitoris for orgasms. It happens to be big enough to stimulate the top of the clitoris, getting the labia and the clitoris itself down to the point in between the clit and the vagina, as well as into the vagina itself, where it twirls softly. I have noticed that, for me, once it gives an orgasm, it starts right in on the next one. Insert the head into the vagina and the prongs will be on your clitoris. It seems like the clitoral attachment would reach most any height clit. Even though I am petite the wide head fits me easily with a drop of lube. But since it has a wide head it would be for more advanced users. I did notice that today I needed a certain spot stimulated. It was the area between the clit and labia. I tried my other toys. They were not what I wanted. Then I tried the Wild G with its multi , soft pronged extension. That did fit and the prongs were soft enough to slip into the area that I wanted. Ah! 7th heaven!

Wild G is made of TPR Silicone, which has a rating of 6 out of 10 in safety. The top 2/3 of the toy is sticky and lint gathering so store it in something large,like the blister pack it came in. For insertion since it is sticky use a water-based lube and use condoms for sharing. I keep it with my other toys, but since the silicone has TPR in it and it is lint gathering I keep it also in the blister pack it came in. The bottom 1/3 is made of plastic, but the whole toy is smooth with give in it. Near the attached clitoral section there are a few raised imprints. They are not high enough nor hard enough to be felt by the body. The toy itself is rigid with a soft outer layer to give comfort

I decided to keep it and all TPR toys separate, not because they are dangerous, but because I am somewhat sensitive to the very light after-smell (that only I smell). So, I just clean it off and put it in its blister pack after use.

Once I used the toy I associated it with instant orgasms, so I love the design. My opinion of the size at first was it's too big, but that changed. It might be too big for beginners, but once a drop of lube is spread around, it slides in easily enough. It is not so easy to hide. There is nothing discreet about the toy and it is not very suitable for travel.

There is no instant on-off switch, unfortunately, and it starts from the lowest setting again.

The buttons on the left on the control panel control rotation of the top and there are 3 buttons above it to go faster or slower. The buttons on the right control the vibration and the 3 buttons above it control the speed of vibration. There is a button in the center of the control panel and it controls whether the toy is rotating to the left or right.

It does rotate pretty slowly and vibrates somewhat slowly, but for myself all of the controls, movements and the soft-pronged extension add up to a satisfying session for me.

I rather went too long today, because the sensations were pleasurable, and had to quit because I noticed something else. It may be easy for me to slip the head in, but after a while I had to quit because it was making me sore. I'll have to limit my time. :/

The Wild G cannot be heard behind a closed door. It is so quiet that it is almost silent while I am holding it.

The toy is waterproof and before use should be cleaned with mild soap and water or antibacterial toy cleaner as well as after use. After it is dry it should be placed in a large lint-free bag or box. It's easy to care for.
Any lube used on the toy should be water-based lube. Avoid silicone lube.

The toy was packed in a blister pack and there were few instructions with it. I think that most likely since it is easy to figure out, none was needed. I use the blister pack to keep lint and dust off the toy but due to the designs and shape of the blister pack I would not use it as a gift box. 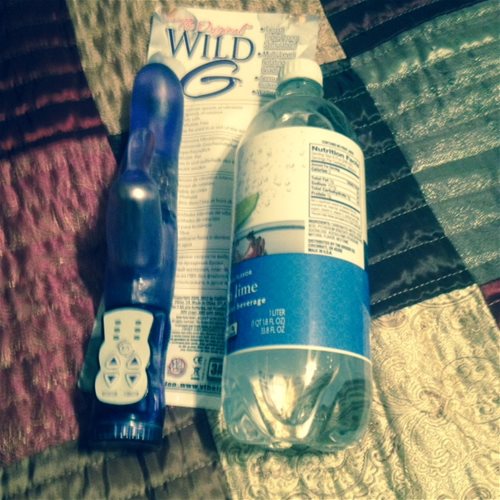 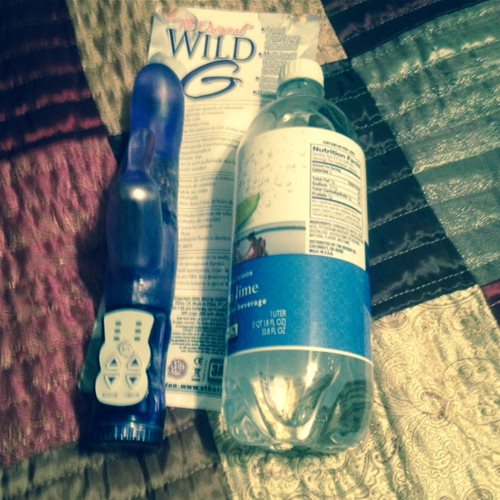 It was a good thing that I waited to have this done because in the meantime the insert that swiveled does not swivel anymore. It detracts some, but the tip still vibrates and the clit attachment is the best I've felt, so I still like it.
Follow-up commentary   I still like it 6 months after original review
only the shaft does not work except to vibrate. The clitoral attachment is as delightful as ever and makes up for the non-movement
This content is the opinion of the submitting contributor and is not endorsed by EdenFantasys.com