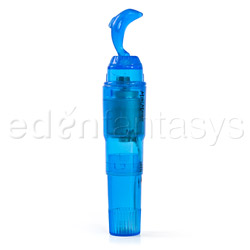 Animal Shapes Are Sexy Too!

The Dolphin Clit Teaser is very aptly named. It isn't meant to apply pressure to your clit while it vibrates, it just teases. This is a great little toy for sensitive clits or those players looking for a toy to torture their willing victims into mind numbing pleasure.
Pros:
Inexpensive, powerful vibrations, light teasing sensation
Cons:
Not able to apply pressure, pin point nose might irritate some clitorises
Rating by reviewer:
3
extremely useful review
I know it's bad form to sexualize animals and gross as well, I still have to admit that I like animal shaped toys every once in a while. Having swum with dolphins I can say that when I use this toy I am seriously not thinking about Flipper. With three very interested, nosy, children it helps to have something fairly innocuous looking as a toy, especially when my son wanders out of my bedroom chewing on it. I'm not saying that happens often but there is always the possibility.

I fell in love with this little clitoral vibe pretty much the first instance I saw it offered as a promotional. Normally I steer clear of jelly toys but I reasoned that this isn't an insertable toy so it wouldn't cause the awful reactions most jelly toys cause my grouchy and hypersensitive Lady Garden. I am happy to report that I was absolutely correct in my assumption. After half a dozen uses I have yet to experience the burning and irritation that is pretty standard, for me, with insertable jelly toys. I think the major difference is this toy is meant to be a very light teaser and so it doesn't have much contact with my vaginal tissues.

The Dolphin measures in at 5 inches in total but only the tiny one inch dolphin is actually in contact with your body. The nose it super tiny but easily felt, it can be a bit too pin point for some users but I found that if you turn the toy over and use the dolphin's back it eases the prickliness. The dolphin vibrates at a super fast rate but doesn't offer much for users who need pressure along with their vibration. For these users this will probably be a warm up toy rather than a finisher.

The Dolphin is composed of soft jelly that transmits the vibrations easily and strongly. The rest of the body of the toy is hard plastic and designed exactly like a classic Pocket Rocket. The single AA battery slides into the bottom of the battery housing which comes completely off the toy's bottom with a twist. This seems like it would be a good thing until you realize that when you twist the toy to the On position the Off position is just a half twist back toward the Open position. Basically most of the time after the play is done you will have the toy come completely apart! Not too annoying if you are int he habit of removing the batteries from your toy after play but if you are a stop and start user then it quickly gets VERY annoying.

The toy is not waterproof so no shower or tub play. You should be very careful during cleaning to protect the battery housing as it will let water in easily. A simple spritz with a commercial toy cleaner or a soapy wipe down is the recommended cleaning method. This toy is made of jelly so using a condom is not only awkward but also ineffective as the condom tends to lessen the vibrations. This isn't a toy that can easily be shared.