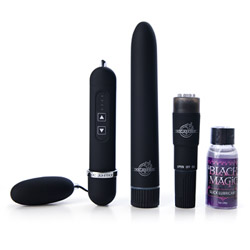 As with Any Kit

Despite some minor flaws, the black magic pleasure kit is a great option for those who enjoy variety. I would not buy these toys separate, as some are offered, based on the fantastic price you can get this kit for. The original price was $39.99, but I've seen this kit on sale several times for as much as half off. Overall, the power is impressive, though the quality could be a notch better. If you are putting on a show for your partner, this kit can be especially useful and fun!
Pros
-Bullet's powerful
-AA and AAA batteries (no watch or large batteries)
-Would buy it again overall
Cons
-Can be rather noisy
-Vibrator is small
-Lube bottle is messy
Rating by reviewer:
4
extremely useful review
As with any kit, there are some things about Doc Johnson's Black Magic Pleasure Kit that I love, and some that make my vagina angry. What's that movie where the girl has a vagina with teeth? I always wondered if her dentist had twice the work...back on task...

Multi-speed bullet and controller:
With about 3 feet of cord, this bullet won't keep you on too short of a leash, and when bumped up onto the 4th and final power setting, this thing is strong enough to snake itself across the floor! I'm actually a big fan of the power settings for this bullet...there is a strip of four dots on the front of the controller, and there is an up and down arrow set below them. By pressing the up arrow, you increase the power, and by pressing the down arrow, you can take it down all the way to off. You can expect 4 vrooms from this bullet, though it is also one of the loudest or possibly the loudest in the set. 2 AAA batteries are needed for this bullet, and they are not included. Once again, Doc Johnson has branded a silver ring on this controller with "Doc Johnson" not once, but twice. Finally, the bullet does have an indent on the controller (I'm guessing for easier gripping), and the bullet itself has a seam directly horizontal down the center of the oval.

Pocket Rocket:
The pocket rocket brings the velvet texture in a way none of the rest of this set does. I cannot stop myself from feeling it, and I honestly wish that the coating was carried through onto the part of this toy that actually comes into contact with my clit. Instead, the top is hard plastic with little bumps all over. This may be my least favorite item of the set due to the odd controls and rough contact surface. The controls are actually on the base, which offers a large section to turn from open to off and then on. It's far too easy to pop this open by accident when turning it off. There is also a clear/white O-ring with this, and once more, the Doc Johnson name is branded on the side in white. I don't find the vibrations in this to be focused enough, and overall, I do not believe I would ever be able to orgasm from this rocket's use. It does take 1 AA battery, which is not included.
Experience
Continued...

1 oz. Lubricant:
This lubricant gets kind of goopy like rubber cement when it begins to dry. Luckily, only a 1 oz. bottle is included with the kit. It's also extremely messy due to the twist off top though a safety seal does keep it from leaking when shipping. It smells kind of citrusy, but tastes sour. This lubricant is made in the USA, and it is water-based and paraben free. Water-based lubricants are easily washed away with just warm water, though if you do not wash this off before it dries, even if there isn't enough to goop, it does make skin tacky. It's a slightly thicker lube than some other water-based lubricants that I've tried, but I also notice that it's not incredibly long lasting. The bottle itself is clear with a purple, pink, and black label with the Black Magic name and the words "slick lubricant" along with some info. My ingredients list was covered with a black sticker, which I peeled off.

So, the vibrator and the bullet are both keepers for me, but I am still on the fence about the pocket rocket. As for the lubricant, I will be tossing it rather than using it based off of both performance and an ingredients list that has to be googled. Overall, I would give this set 4 stars because of the power, the common battery types, and other positive aspects such as not guzzling batteries and safety. The overall kit offers an exciting variety and only one major flaw, which I would name as the lubricant. However, since the lubricant was basically a sample bottle anyway, I won't judge the set too harshly.
Follow-up commentary   I don't like it anymore 2 months after original review
The original excitement over the variety of this set has since faded a bit. I still use the black magic pleasure kit, though the lube has been tossed, and the pocket rocket only makes rare appearances. I love the bullet from this set, and I find that it's my most used piece. That being said, if you aren't looking for a bullet, then I don't believe I would recommend this set to you. On the other hand, if you are just apathetic in general about bullets, this one may change your mind! Overall, I just can't imagine paying $29.99 for this set when I only get regular use from one item; I'm glad that I bought mine on sale.
This content is the opinion of the submitting contributor and is not endorsed by EdenFantasys.com