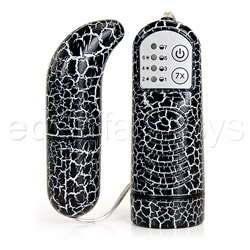 Bad to the Bone

The black and white, hard plastic bullet measures in at around four inches, with three of those inches being insertable. It has a slim, one inch diameter and an extremely nifty crackled texture they call "fractured black" that looks exactly how it sounds; like fractured, crackled paint. The texture is easily felt in your hand as being not smooth but not exactly highly textured or ridged, either. Inserted or held against other areas of skin, however, it is barely noticeable. It feels a bit less slick than a non-textured plastic toy but more slick than a velvet cote one.

The bullet has a slightly pointed, hooked end intended to stimulate the g-spot - though if you need thrusting to bring yourself to orgasm via g-spot stimulation, you may not be able to thrust this well due to it's short length.

The cord is 30 inches long and has little rubber-like o-rings at the attachment points on both the bullet and the controller which prevent the cord from being pushed inside of either piece. (I've had problems with this with past bullets) It's definitely long enough to hold the controller in one hand near the top of your body where you can see what you're doing while using the bullet. A definite plus!

The controller is also textured in the fractured black with handy rows of ridges to, presumably, help you keep a grip on it with lubed up fingers. It takes two AA batteries and the battery cover screws off for easy insertion of them. The controls themselves are push button with a light up panel so you know what level you're at. One button is a dedicated on/off button and, obviously, turns the toy on and off. Very handy if you need to turn it off in a hurry as you don't have to scroll through the vibration options. The second button sets your vibration at one of the seven available levels/patterns.

The Bad Ass G-Bullet is fairly quiet for a hard plastic toy. It can be heard under covers but probably not through a closed door, especially if you have other noise (tv, radio, fan) in the background.

Because it's hard plastic, it's phthalates-free and can be used with the lube of your choice; water based, silicone or oil. Clean up is easy with soap and water, toy cleaner, wipes, an alcohol rub down or even a ten percent bleach solution. Plastic is not considered sterilizable, however, so cover it with a condom if you're going to share.

The package notes that this toy is waterproof, though I haven't tried it in the bath or shower because I'm leery of taking any corded toy into a substantial amount of water. I have washed it under running water, however, and have had no issues with water getting in the battery compartment due to a snug o-ring seal.

Care should be taken when using corded toys as the cord can become kinked and ruin the toy. Store without wrapping the cord tightly and use care that it doesn't become overly bent or kinked.

It's not the shape of the bullet or its intensity. It's got a fairly standard g-spot tip, and standard-for-a-bullet vibration intensity. It's not even the fractured texture, which is pretty nifty, but it is the patterns of vibration. The escalations and rollercoasters; they are amazing. Unbelievable! Fucking insanely awesome!

p.s. The two AA batteries this runs on lasted me about an hour using all the patterns.
This product was provided free of charge to the reviewer. This review is in compliance with the FTC guidelines.