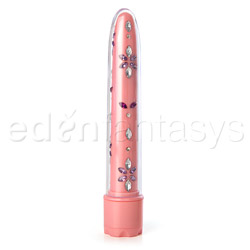 Best use for this vibe? We spent a lot of time "unsheathing" the toy like a dagger by holding the base and whipping off the clear plastic shield. "Huzzah! Bow before my Lightsaber of Sparkly Jewels!" Clearly a good time was had by all. Now we just need a second one in baby blue to complete our collection and have a really amazing jousting competition.
Pros:
Potential use as lightsaber, shaver, or weed-whacker.
Cons:
Loud! Cheap! Plastic!
Rating by reviewer:
1
extremely useful review

"Ooh, look, sweetie, look at what mommy brought you. Your very own My First Vibe!"

Now, I'm not against getting a toy for your teenager, not by a long shot. But if you're going to get one, get something quality. (If you must have shinies with your vibies, then this one is a good, solid, fast-moving, mostly quiet, worth-the-money option)

Best uses? I wish I had one. (Edit to add: I do have one! Lightsaber jousting! With pictures!). This is one of those toys for people who want to be able to say they own a sex toy, but who never plan on using one.

This toy is made of pink plastic with fake jewels stuck in a kind of flower and line design along its length. Need I say more? It's like the person who invented Barbie's car (the 1970s-era car, natch) wanted to move into adult toy making and thought, "Well, we have all this left-over plastic and ... ooh, look a bedazzler! Let's make a vibe!"

But if it falls off so easily, what's the purpose? Why bother to make it come off at all? Are you supposed to use the vibe and the jewels against your skin? Is that part of the packaging? Is it the thing that's going to make it, as it says on the box, "100 percent waterproof"? (Because without the deflector shield, everyone knows it's just 99 percent waterproof and that droplet known as Luke Skywalker could slip right in and destroy everything.)

Now on to the jewels which, combined with the whole pinkness of the vibe in general, are what make me think of a kid's toy every time I look at this. They really are reminiscent of that bedazzler phase of our lives when we (okay, you. I would never! -cough-) stuck an array of fake jewels on your pants, your shirts, your tote bag and your little sister. They seem to be actually embedded in the plastic of the vibe somehow - glued? Yes, I think so. Yet, some of them aren't as well embedded as others (the edges are peeling off), which gives me bad images of a future that includes the phrases, "Oh, look, it lost a shiny! Where is it? I don't know... where was it the last time you used it? ... Oh."

You know those baby dolls that come with accessories? Like pink plastic spoons and baby bottles and a set of diapers, and none of them really look like what they're supposed to, but they have the general shape right, so you can figure it out. "Well, this one could either be a spoon or a poop shovel... let's go with spoon!"

It's slightly over seven inches long, and it's got about as much give as, well, solid plastic. There's no real shape to it - bullet-shaped maybe - and it's not likely to fit into any of your body parts, so it's best used outside, if it's used at all.

This thing sounds like a weed-whacker. I'm not kidding. In fact, I turned it on in the living room and The Boy, who was playing HalfLife 2 with his back to me, actually turned around mid-fight (risking character death, something he doesn't even usually do for house fires or naked women) to go, "Holy shit, what the hell was that?!?!" So, it revs up, and then to make it worse, it rattles. And what does all this rattling mean? I'm pretty sure it translates into, "I'm really really cheap and you know that place on my box that says I'm just a novelty item? Well, for once I actually mean it."

The controls are at the base -- put in the two AA batteries, close it up, twist the handle. Not that easy though. On mine, you kind of have to push the handle in to make it connect to the batteries (or something...I don't know. I just know that sometimes there's no weedwhacker noise, and if I push in on the base there is a weed-whacker noise). The intensity goes from nothing at all to a little more than nothing at all to just a little bit more than nothing at all. Even on its highest setting, this vibe is all rattle-rattle-rattle and not much in the way of vibration.

It IS waterproof, though, and worked just fine in the shower (if you define "worked" as making the whole bathroom reverberate with the sound of someone using a chainsaw in a waterfall). Water did get under the plastic shield (someone please tell me: WHAT is that thing for?!), and an experimental... er, accidental... drop into the tub caused the plastic shield to essentially shatter into about sixteen pieces. So much for the protective sheath.

For suggested care and maintenance, just keep it in the box, set it high on a shelf and never use it. Maybe it, like Star Wars figurines and early Hello Kitty dolls, will be worth something on the e-bay toy market someday.

If you've already taken it out of its box and used it (so sorry, I tried to warn you, Young Luke!), then you can wash it with antibacterial soap and/or isopropyl alcohol.

It will work with water, oil or silicone lube. If you must.

Alas. Alas. Alas.
Follow-up commentary   I still don't like it 4 months after original review
Yeah. Nope. Not a thing to like about it, still. It's not even fun to play light sabers with anymore.
This product was provided free of charge to the reviewer. This review is in compliance with the FTC guidelines.