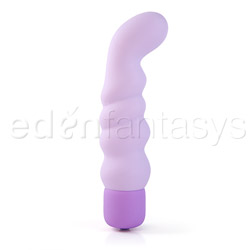 The Ridged Rocker is a good ol' G Spot Vibrator with a couple of tricks up its sleeve. Made from smooth ABS hard plastic, it's lube-friendly (with easy cleanup too!,) body friendly, and it's got ten different vibrational patterns to choose from! It's fairly quiet, of average size, and the G-Spot tickling ridges do double-duty as providing a great hand grip for using the tip of the toy externally. A great buy for the price, recommended to all sexual people!
Pros
Creative vibrations, splashproof, good material, powerful, inexpensive, quiet.
Cons
Better controls would make for a better experience, slightly awkward shape.
Rating by reviewer:
4
extremely useful review

However, in my second experience with this toy, I discovered a delightful and previously unrecognized quality. The ridges in the shaft, designed to sensually tease and stimulate the inside of a vagina, make a perfect set of finger grips! The Ridged Rocker can be cleverly subverted for other uses now! I find that these ridges-turned grips make for turning this toy into a wonderful clitoral stimulator, as well as for stimulating nipples, a male-bodied person's perineum, labia, scrotum, muscular knots, or any other exciting erogenous zone that you or your partner might find that could do with a little vibration!

The Ridged Rocker is made out of ABS plastic, the same material that Evolved makes their Silky G and other vibrators out of. It's got the rigidity and non-porosity of hard plastic (more info on sex toy materials here) but the silky, slippery smoothness of silicone (at least in my opinion/my experience.)

I find that ABS plastic takes very well to lubricant. You can use lube with any base (water, oil, or silicone) with this toy, and it will not damage it. The smooth, slick, nonporous texture feels divine with a little extra slippery-ness added in! Take care to note interactions of lubes and condom materials, though! If you choose to use a condom over this toy, you must make sure that your lube and condom will get along well. More info on lubes can be found here.

I would recommend this toy to toy-users who are used to rigid, non-pliable toys. Sometimes hard plastic can be a little intense or, well, hard on sensitive areas. Try out a few different materials, and see what works for you!

The shape of this toy is rather innovative. As I'd noted before, the grooves are not only well-placed for vaginal stimulation, they make excellent finger grips!

For size comparison, I took a photo of the Ridged Rocker along with two similar toys, and one AAA battery. From left to right, depicted are the G-luxe 6" Magenta by Topco, the Silky G by Evolved, and this Ridged Rocker (by NMC Ltd)

An interesting thing to note about the Ridged Rocker is that it's a relatively narrow toy. The ridges make it seem much wider than it actually is, but if you turn it sideways, it becomes apparent that the actual "height," so to speak, of the shaft is much greater than the width. For context and a little more detail as to what I mean, I've included two photos of the Evolved Silky G (left) and the Ridged Rocker (right). this photo shows the width of the two toys from one perspective. They look about the same, right? Then this photo shows them turned slightly. See what I mean?

This toy is for an intermediate toy user, in terms of size. Someone new to toys might be a bit intimidated by the large ridges, but it might not be big enough for someone who really likes big toys. Personally, I found the toy to provide a wonderful "filling" sensation, although if it were wider all around instead of just having the large ridges, it would probably be even better.

The toy operates with the touch of a single button, located at the end of the battery compartment, just like Evolved toys and other similar vibrators. There are ten functions, total. You cycle through the functions by pushing the button again. The only way to start over at the beginning of the ten functions without having to cycle through them all is to pop open the battery compartment (which would be a problem if you're intending to use this toy in a wet environment, i.e., the shower) I think this is a little bit of a design flaw, but it is understandable given the low cost of this toy.

Here are my descriptions of the ten settings to the best of my ability. My mother is an elementary music school teacher, so maybe she's influenced my ability to try and write down the very silly sounding onomatopoeias created by this toy:

Haha! If anything, I hope that was entertaining, if not helpful. The packaging shows the ten patterns in terms of what looks like a cardiogram, seen here.

The toy is pretty quiet, for what it's capable of. It is about 1/3 quieter than the Silky G, for comparison. It is easily muffled by pillows/blankets or even the shower running, if you're using it in the shower...this quality makes it great for dorm-dwellers!

The packaging claims "waterproof!" and there is indeed an o-ring inside the twist-off locking top to prevent water seepage. However, an insert in the packaging says to not submerge it in water, so I would say this toy is splashproof only, not waterproof. It performed just fine in the shower, and there was no water inside when I opened the battery compartment to check for any.

This toy is easy to clean up, just wash with some soap and water or a toy cleaner. It dries very quickly, and lint does not adhere to it like it does to some softer materials. This is actually one of my favorite parts about hard plastic toys, including ABS plastic. No lint! Hooray! After it dries, I remove the batteries to save their energy, and just toss it right into the toybox.

In terms of sharing this toy between partners, I would recommend using a condom over the toy. Although plastic is nonporous, it cannot be fully sterilized like silicone.

I threw out the packaging after writing this review, as it's not particularly well-suited to storage.

The battery compartment is pretty neat, it's a little black cylinder that pops out when you take off the locking top of the toy. There are very explicit instructions printed on it, on exactly how to insert the three AAAs this toy accepts (which is great for me because I am forever screwing that up and probably shorting out my vibrators!)

I found that this toy was great to alternate with the Evolved Silky G. I would use one toy vaginally and the other clitorally, and then switch them up! Using the grips on the Rocker to apply those wonderful vibration patterns to my sensitive clit while stroking my G-spot with the Silky G luscious curves brought me to a thundering orgasm quite quickly!

I also enjoyed fucking myself vaginally with the Ridged Rocker while holding the two bullets of the Climax Clicks Double Click on either side of my clit.

Silky G
$24.99
This product was provided free of charge to the reviewer. This review is in compliance with the FTC guidelines.