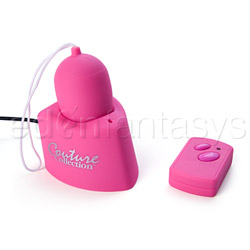 The Couture Collection's Bliss by California Exotics is a wonderful rechargeable, wireless egg-shaped vibrator that has so many uses, it's impossible to list them all. With seven different functions that are quite powerful and a velvety feel, it is sure to please in any number of situations where a little fun is called for. Handing the remote over to your partner is sure to be the start of an evening of fun.
Pros:
Powerful vibrations, rechargeable, different patterns, wireless to up to 20 feet, velvety.
Cons:
Semi-porous, not sterilizable, remote control text wears off quickly.
Rating by reviewer:
5
extremely useful review

The Bliss by Cal Exotics is a wireless egg/bullet that can double as a kegel exerciser. It can be used clitorally, inserted vaginally (NOT anally, ever), or used as a teasing mechanism on the nipples, labia, or anywhere else you desire.

This would be great foreplay for couples, as one could use the bullet and the other could control the vibrations. This would also be good for solo play. As the bullet is sort of loud on its patterns and higher levels of vibration, it would only be good in loud settings, such as a concert or at a club, or where noise doesn't matter, such as at home or in the car.

The bullet is waterproof, but the remote is not sufficiently waterproof, so, bath play is possible, but do not submerge the remote. If you want to use it in a splash environment, it is suggested to put it in a plastic Ziploc baggy.

The Bliss is made of PU (polyurethane)-coated ABS plastic, with a nylon string. This toy is phthalate-free, but still somewhat porous. However, it is odorless and tasteless when it comes out of the box. Because the core of the toy is plastic, it is rigid and without give. The egg itself has no texture.

The Egg
The egg-part of the Bliss is, indeed, egg-shaped. It has a rounded, tapered tip that flares out, and then drops off. On the surface of the bullet is a CE symbol, a symbol indicating not to throw it in the garbage, an on-off button that is slightly raised (which also doubles as an LED indicator), and a corresponding small bit of text saying ON/OFF. The retrieval cord connects to the egg by a little nodule sort of thing. The egg is 2.5" long, from 'nodule' to tip and 1.5" in diameter (4.5" in circumference) at the widest point. The string measures in at 4.5" long, which was plenty long enough.

The Remote
The remote piece of the Bliss is tiny, pocketable, and a rounded rectangular prism. It has two buttons and an LED light on it. The smaller button is a dedicated ON/OFF button, and the other, which looks vaguely like an L or or a 1 without the bottom line on it, scrolls through the patterns. The buttons are kind of rubbery-feeling, but aren't sticky. The buttons give a satisfying click when compressed, and the LED lights up. Lengthwise, the remote measures in at just over 1.25" in width, just over 2" long, and just over .5" in thickness. For batteries, it takes one 12V battery, which is provided. The text on the buttons seem to wear off really quickly. Flakes started coming off in the text for the first use, and now, they're barely readable.

The Charging Base
From above, the charging base is heart-shaped. To charge, the egg simply sits (with retrieval cord aiming upwards) in the little cradle. There is an LED indicator on this, as well, and Couture Collection runs along one side in silver. The base is kind of large, at about 2.5" wide, 3" long, and 2" high. The cord plugs into the back, into the small port. When the egg is in the cradle and charging, it lights up like a Christmas tree. It's super bright. So, if charge it at night and you like your room dark, plan on putting it in a drawer or closet, or covering it up.

Overall, this is a very well made, well thought out wireless bullet.

To turn on the Bliss (after it has charged, of course, for about two hours), you press down the button on the egg and hold it for 4 seconds until the green LED lights up, and the toy glows reddish for a moment. Release, and at this point, the green LED will start to flash every 3 seconds or so. This is the standby mode. When fully charged, the toy can stay in standby mode for 1-2 days. Anyway, after it is in standby mode, press the ON/OFF button on the remote, and feel the vibrations flow. To change the vibrations, press the larger button, the odd L shaped button.

There are 7 modes.
1. Low, constant.
2. Medium, constant.
3. High, constant. The toy is really kind of high pitched at this point.
4. Long escalation/staircase, with a pause at high. There's about 8 levels on this one. It starts back at low after going all the way up.
5. Fast pulsation. 14 pulses in 5 seconds.
6. Even faster pulsation. 18 in 5 seconds.
7. Three shortish pulses followed by one long pulse. It's about like (_ _ _ ___) visually. They feel like they are different levels of vibration, but if they are, it's between medium and high.

The vibrations travel really well throughout the toy. The remote is said to work about 16 feet away, but after testing it out, up to 20 feet without any obstructions worked too. The egg itself is waterproof, but the remote seems suspect. If you are wanting to use it in a splash situation (like a shower) a Ziploc bag is suggested.

To wash your Bliss egg, soap and water or commercial toy cleaner works fine. As it is waterproof, there is no worry for ruining the toy when running it under water. To clean the nylon cord, a little (like a small dollop) dishwasher detergent works great. It brightens the whiteness, if it has discolored. To clean off the remote, a damp cloth will be fine. Do not get water on the remote.

Storage is a snap, too. You can simply display it in its little cup/charging port, or hide it away in a drawer. It does not attract lint whatsoever. Keep it away from lesser materials (and, better materials) to avoid ruining your Bliss!

The Bliss comes packaged in a cute heavy cardstock cube. It's very classy, actually. It shows the toy and its remote on all 4 sides, telling all about the product. While you might think the easiest way to open it is from the top, it is actually via the bottom. Cut the two clear stickers on the front (it has raised lettering and images) and back on the bottom, and pull out the cute tray. In this tray sits the egg in its base and the remote. The base and egg just slide right out, as does the remote.

Lifting up the front panel (that has the text) of the tray, you find all of the other important things, such as the charging cord (which is the European plug; the Bliss comes with an attachment to put on the American plug), the 12V battery, and the instruction booklet and sheet. The booklet was not very helpful; it was only a generic booklet for all of Cal Exotics' toys. English is on page 7-12. The instruction sheet is actually very informative.

While I would not use this to a quiet restaurant or ballet, this is great in semi-loud environments, where there is a general hum of noise, like a larger store, in the car, at a club, at a concert, etc. Then again, I'm not ruthless like many people are!

I really enjoyed using the Bliss, both as just something that sits in my vaginal canal for kegels, and for turning it on while doing ordinary things, like vacuuming and grocery shopping. I can't wait to give the remote to my partner for him to use on me.

But honestly, the best thing about this toy is it's rechargeable, and very simple to use. A lot of wireless eggs tend to be hit or miss, I've noticed. This one is definitely a hit.

Subjectively, this is worth all 5 stars.
Objectively, also a 5.
This product was provided free of charge to the reviewer. This review is in compliance with the FTC guidelines.