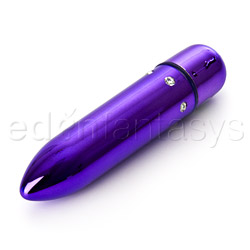 Crystal high intensity is a very discreet and powerful bullet, great for on the go, and travels well. She is great for a beginner because of her size. Controls can be a little confusing in the beginning; you just have to remember to read the packaging before hand and you will get along with her just fine. The type of battery Crystal uses can be a little hard to find at a local grocery store, but EdenFantasys does sell them.
Pros
Small, discreet, multi-speed, great for beginners, good for travel.
Cons
Controls are hard to figure out at first, batteries can be hard to find.
Rating by reviewer:
4
extremely useful review

Crystal is made with very smooth plastic that gives the appearance of metal, or at least to me. She doesn't have a smell at all, which is nice for a change. There really isn't any texture on her at all, but the speed of the vibrations add something to be desired, because she has a lot more speeds than other bullets that I have tried. But the texture, to me, is meant for beginners, because of her smooth texture and non-threatening look. She has rhinestones around the bottom, which seem like they would attract a lot of younger women's attention. And because of her size, they won't really need to be afraid if someone finds it. She is also great for advanced users as well, if you desire something for simpler excitement in the bedroom.

Crystal is seamless with 6 fine white crystals going around, right where the cap is located. There is a rubber ring, which matches the color of the toy, which helps keep the water from entering the cap and ruining the toy altogether. She takes a size N battery, which can be kind of difficult to find at your local grocery or drug store, but luckily, she does come with one.

The shape is pretty standard for a bullet. She is similar to lipstick in shape and size. The insertable end is like coned shaped, which is similar to some gun bullets, to me, and makes her feel good around the clit. Crystal is a smaller bullet with a length of 3 1/4" and a insertable length of 2 1/2". She is great for a beginner, because of her small size and simple controls (if you read the package first).

She is really easy to hide in a toy box, a toy bag, or even a drawer. Knowing myself, I would have a habit of losing her, because of her small size. So I keep her close to my bed at all times. She is very discreet; if you placed it in your purse, people may think it is a tube of lip stick. She is also great for travel, again, because of her size. You can just put her in an overnight bag, or in your make-up bag, and you are good to go with some vacation fun.

When I first received the Crystal High Intensity bullet, I was in love with her. Her functions are great. She has no modes, just higher speeds than most bullets that I have ever tried. Her performance is good, too. You just turn her on, pick the speed you would like,and play. The vibration is located in the tip of the bullet untill you turn her up the speeds, and then you can feel the vibration all through the toy. For me, personally, I only really care for her on the highest speed you can have. I have used toys for so long, that simpler toys are just not cutting it for me.

At first, the controls were a little confusing. I was so excited to add her to my collection I didn't pay attention to the package. I thought that the controls would be similar to my Breeze Power Bullet. With the Breeze you just push once to change the speed, but with Crystal you have to hold the button down. The control is a button is located on the cap of the toy. When you turn on Crystal, the button turns red, and you hold it down to change the speeds. It is kind of hard to count how many speeds, but there is about 7, I think. Crystal is a pretty quiet toy at the lower speeds. When you turn her up, she can be a little bit louder than you might like. She kind of sounds like a cell phone vibrating in a silent room, at the high speeds.

She is waterproof, and she performs well. You must remember to have the cap tightened as much as you can, so no water can ruin the toy. Because of this fact, you can take her in the shower with you. As function and performance go, she is the same in the shower as in bed. You can take her in the bathtub, too. Personally, I don't like taking my waterproof vibrating toys in the tub with me. I'm always worried I will break them by not having the cap on tight enough. So, I don't have any comments on her for function and performance underwater.

To take care of Crystal, she can easily be cleaned with antibacterial soap and hot water or by wiping down with isopropyl alcohol, which is very easy to do. Right now, I'm storing her in her original packaging, in my toy bag, which is where she will probably stay, but you can place her in your own personal toy place without the packaging. You just should remember to remove her battery and have it close by, so you don't forget the type of battery you need for her.

With the material Crystal is made from, you can use water, oil, and silicone based lubes. But on the package, it states to only use a water based lube. I don't really use lubes that much, so I don’t know what to use on her. It may just be best to follow what the packaging says.
Follow-up commentary   I don't like it anymore 2 months after original review
The Crystal High Intensity bullet is not so great anymore. She is just started to get boring for me. Her speed control just got too annoying to remember how to use. The plastic ring started moving on me, so I stopped taking her in the shower with me out of fear of her breaking completely on me.
This product was provided free of charge to the reviewer. This review is in compliance with the FTC guidelines.