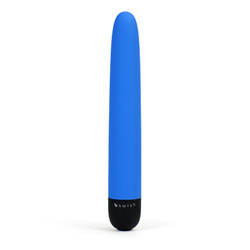 Well reviewers, I am sure you can guess that I would not recommend this vibrator. If you have a very sensitive clit then this one may be for you. But if you are like myself, and like to have the option to have either really low speeds and then climax with a high speed, then do not order the Bgood or you will Bdissapointed.
Pros:
Dial at the base to increase speed, velvety shaft
Cons:
Not enough speed
Rating by reviewer:
1
useful review
I ordered the Blue and Black Bgood online because of the simple look to it - soft blue shaft with a black base. The simplicity intrigued me and got me thinking, "is simple better?"


I excitedly layed down and thought I would let the Bgood give me what I was waiting for. I slowly turned the dial, as I did not know what to expect for the speed. It was very light so I continued to turn the dial up. Up some more. And more, and then it stopped! The speeds could not go any faster, and I was so let down to realize that the speeds were so mild. I took the batteries out of the sleeve, which did increase vibrations a little bit but also increased the noise. I did cum with some extra work but it was not the vroom I was looking for, it was too simple. I wanted to lay back, relax and just let the vibrations take me to an amazing climax- that was what I paid for anyways. It did feel nice inside me because of the soft feel but it is not curved, so I did not reach my Gspot. I would not say I need a very high-speed to get off but hey, I like having that option depending on what mood I am in.
This content is the opinion of the submitting contributor and is not endorsed by EdenFantasys.com

My Bgood tags
About author