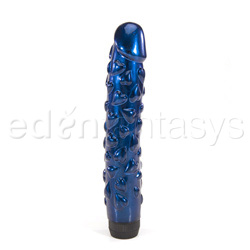 I definitely recommend this toy to the avid vibe user looking for an update to their collection without shelling out a ton of cash. It's strong vibes and big size make this toy better than the typical Pocket Rocket, but not so complex that it takes away from its intended job. If you can overlook the funky battery construction problems, definitely check this toy out.
Pros:
Nice, big, and hard. Strong vibes, low odor.
Cons:
Poor battery pack construction.
Rating by reviewer:
4
useful review
Based on prior customer reviews of this toy, I was a bit wary to order it, but went ahead and gave it a try. Boy, were those other people wrong!

I've always loved things bigger- bigger bed, bigger boobs, bigger... well, you get the point. This big blue vibrator certainly is big, long, and thick. Many larger toys tend to be flimsy or made of mushier materials. This toy is made of a very firm jelly material, meaning it holds its shape and stays very hard, while maintaining a realistic feel (instead of just hard plastic). Jelly material is great because it's safe with water and silicone based lubes, and is relatively easy to clean, which is always a plus (However, it can't be sanitized! So no sharing without a condom).

Vibrators are always my favorite toys, because they're like two toys in one. Without the vibe on, this toy is a great dildo. It is covered with teeny blue raised hearts, which are small, but are large enough to definitely be felt during penetration. This makes a great new sensation, separate from the vibrations of the toy. Some jelly toys or other materials have a tendency to absorb vibrations. Again, this toy surprises and delights. The interior device for vibration in this toy is very well placed in the center of the toy, and distributes itself very very well. The only time you can tell that the vibrations are uneven is when it is set on a lower setting. The vibrations themselves are nice and strong at the highest setting, and are also comfortably soft and the lowest setting. I still use a tiny bullet vibe right on my clit when I use this toy though, only because the vibrations seem to stay mostly interior once inserted (and I like a little more stimulation elsewhere).

When purchasing a jelly toy, it is normally expected to have at least a slight jelly smell. This toy had a bit of an odor, but it seemed to be mostly a plastic-y smell that was just from the packaging. Sure enough, after the first two washes, most of the smell went away.

This toy is certainly a great package; however it does have a few cons. The battery pack was a bit confusing. There were no real directions to show which way the batteries needed to be inserted, and it sucks a lot of juice to keep this toy buzzing. It took me a few tries to get the batteries in the right way. On top of the battery insertion issues, the device at the bottom that controls the vibe is a bit finicky. It doesn’t just screw in easy, like many. It has notches that have to slide under hooks to close. This isn’t very secure, and if not on tight enough, easily pops off while adjusting the vibration strength. This can be a pain, especially if it happens while you’re close, because it’s a big pain to fix the batteries with lubed up fingers.

Despite the cons, this toy does its job super well at a very appealing price. It is cute enough to be girly, but is still butch enough and phallic shaped. The hearts add great sensation, the vibes are nice and strong, and I definitely recommend it as one of the better products in the Tera Patrick line. Happy vibing!
This product was provided free of charge to the reviewer. This review is in compliance with the FTC guidelines.