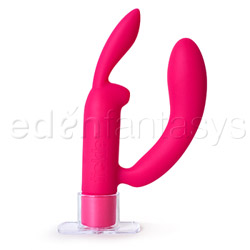 Big bunny no no

I had really wanted to just love The Bossy Toyfriend because it is my first rabbit vibe. But someone didn't think at all when they came up with this idea. Nothing fits or hits where it's supposed to. Too bad because it's cute as hell.
Pros:
Cute, very creative looking, easy to clean.
Cons:
Not well designed, not set up for most women at all.
Rating by reviewer:
1
useful review

Personally, I have never had a rabbit vibe. I have always heard wonderful things about them and I have a lot of good friends that totally love them. But I don't know if The Bossy Toyfriend is the best way for me to start getting into rabbit vibes.

The bulb that looks like it's coming out of the rabbit's crotch area is supposed to go up into the woman's happy spot and the "ears" are supposed to tickle the clit. But it's set up all wrong. You can really tell that this toy was not designed by someone with a pussy or someone that knows much about them at all.

The Bossy Toyfriend is made out of silicone. When you are playing with any silicone toy make sure that you don't use silicone based lubes with them. It's really bad for the toy and can break it down some. There is no smell at all to the Bossy that I could tell. I don't know if it was that I was just lucky or that I have been congested. But I couldn't smell anything at all.

There is a plastic base that The Bossy comes out of for play.

The texture is so silky to the touch. It makes it really nice for playing with it and for just to "pet" the toy.

I'm just going to do a bit of a clinical look at the dimensions of The Bossy Toyfriend. It is eight inches long with six and three quarters inches that are insertable. Its circumference is four and a quarter inches and the diameter is an inch and a quarter.

The design of The Bossy Toyfriend, well, it just plain sucks.

I couldn't get the bulb in very well at all. It was just too wide for my body. Once it was in, the tickler ears actually landed on my pubic bone and not my clit at all. The nose of the bunny didn't land on my clit either. The nose was high on my body as well.

As I said, it seems like this was created by someone that doesn't know how a woman's body works at all.

The Bossy Toyfriend comes with two AAA batteries. And it doesn't eat the batteries at all.

It is a very quiet vibe.

The really, really sucky thing with the controls is that nowhere in the instructions did it say how to turn the dumb thing off. You have to hold the button down for a few seconds to get the thing to shut off.

One of the good things about The Bossy is that it is so easy to clean and keep. Just a bit of soap or toy cleaner and water and you are good. Just keep it in a clean place to keep it from collecting lint. Silicone seems to love lint.
Follow-up commentary   I still don't like it 16 months after original review
I really had no reason at all to keep my Bossy Toyfriend around so it went to the e-waste to get recycled. But I have actually been messaged a few times to see if people could get it from me, and I really don't know how I feel about that.
This product was provided free of charge to the reviewer. This review is in compliance with the FTC guidelines.