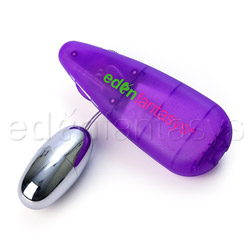 This Product is very affordable so it doesn't leave a dent in your wallet. It's also great as a first timer toy. And if you want to use it with your significant other, it isn't over bearing. You definitely won't regret buying this toy!
Pros:
Great for solo play, When you have roommates, Easy to clean
Cons:
Not Waterproof
Rating by reviewer:
4
useful review
So I purchased this product mid January, and I've used it at least twice a week and I have to say, I used different vibrators and none get the job done like this little guy.

When I first received the package, it was in a simple plastic wrapper. Didn't look too extravagant, it has a metal bullet and a plastic control, and I honestly wasn't expecting much. But once I placed the two AA batteries (another plus, because who doesn't regularly use AA Batteries?) I tried it out, and wow!

It has a nice scroll on the side for speed control which I find very convenient because you don't have to be hassling with buttons, and it fits easily in your hand.

When using outside of the vagina it seems to be about 3-4 bees in sound, but inside it probably tones down to a 2 maybe even 1 bee in sound. Which is excellent when you have a roommate (which I do). I used while she was sleeping, and I wasn't even worried about it because it was almost inaudible.

I personally found this toy very simple to clean since the plastic doesn't hold on to fluids and neither does the metal bullet. You should use wipes, such as baby wipes, or a damp wash cloth instead of submerging it in water since it's not waterproof. Also, once dry I like to spritz some alcohol on the whole thing just to disinfect.

I guess my favorite parts of this toy were the strong vibrations, and how quiet it was. And not to mention the price, it was totally worth it! Also, remember I said I purchased it mid January, well, I still have not had to replace the batteries and it is still just as strong as day one!
This content is the opinion of the submitting contributor and is not endorsed by EdenFantasys.com