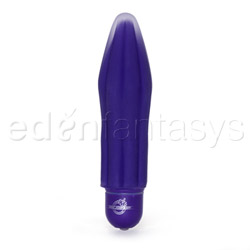 There is information on the back of the box; it is more of seductive way of selling the toy. The side of the box also has the same information that is above in other languages. The languages are English, Dutch, French, Spanish, and Russian. The box can be used as storage if needed. When you open up the box, the toy is sitting inside of a plastic try.

When you remove the toy from the box, the first thing I noticed where white marks all over my toy. I first thought that my toy was scuffed up. I later found out that it was not scuffed, and it was just white marks that can be wiped off. I made jokes about the toy being ashy and needing so lotion. I then notice that it did not feel like my other glass toys. This one had a little drag and did not feel as normal glass. I learned it was A glass is an inorganic nonmetallic material that does not have a crystalline structure. Such materials are said to be amorphous and are virtually solid liquids cooled at such a rate that crystals have not been able to form. If it were to break it would not shatter or splinter into tiny pieces, but instead it would snap or break in large pieces. You can use it for lite temp play, by adding it to some cold or hot water. I would not recommend freezing it or boiling it. When you tap the toy it sounds a little hollow.

The ecstasy is not a large toy. It has a length of 6 ½ inches and an insertable length of 5 inches, and a diameter of 1 5/8. It is a girthy toy, so if you enjoy toys that give you a full feeling than this one is for you. It does have a road bump texture all around it. The texture is not too noticeable when you are using it. You do notice it when you are touching it. Perfect for beginners. The tip comes to a rounded point; although it is rounded I would recommend using caution when using it. You would not want to hurt yourself or bruise your cervix.

The ecstasy can also be used in water if you what too. You can take it into the shower or bath. It does have a clear protective O-ring around the top of the toy under the cap. This lets you know that the ecstasy can be used in water. You can fully submerge it, and this makes cleaning extremely easy. You can submerge it and clean it with mild soap and water. You can also use your favorite toy cleaner, which ever works best for you. Like I stated before, I needed extra lube. So, when using the ecstasy you can use water, oil, and silicone based lubricants. When cleaning, if you happen to get water on the inside, please allow it to air dry before using again. Even though it is glass, you should still use a condom when sharing.

My Reflections ecstasy tags
About author