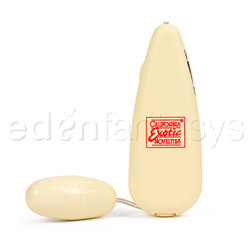 Bullet For My Valentine!

This toy is a great addition to the toy box. While it may not be the most exciting or innovative toy out there, it is a good quality, inexpensive clitoral toy to have. It's good for beginners and advanced users alike and is great for masturbation or for an addition to partner sex.
Pros:
Inexpensive
Powerful
Small and Easy to Use
Cons:
Hand Numbing
Corded
Rating by reviewer:
4
extremely useful review
I bought this bullet because I felt the need to have a bullet in my collection. As much as I love my Hitachi, it's just too big to use in conjunction with an internal vibe. For someone who loves clit stimulation, a bullet is a must have. I was looking for something small, inexpensive, and powerful...and I found it! It's good for warm ups or just when you need a bit something extra during penetration. It's small enough to use with another toy or during sex.The Pocket Exotics Bullet is a great toy for all users, beginners and advanced folk alike.

So here it is. Drum roll please...

Now this little thing may not look like much, but let me tell you, it packs quite a punch! It's made of hard plastic and is about 2.5 in. in length and only 3 in. in diameter.

It's small enough to fit between you and your partner during sex without any trouble at all. It's made of plastic and is attached by a cord to it's battery operated control pack. It takes two AA batteries to get it going and is turned on by a control dial accessible from both sides. The control pack is extremely simple to use. It has a cord that's over two feet long, which gives you plenty of leeway. The dial is very easy to turn and the speeds range from extremely soft to extremely strong.

Cleaning is pretty easy. All you need is some toy cleaner, toy wipes, or a wet cloth. You will want to be extremely careful about getting the toy wet, however. Corded toy + Water = Dead toy. On the same note, don't use this one in the shower, it's not waterproof! There is one annoying thing about cleaning the toy. There is a seam that runs down the center of the toy. You can't feel it during use, but it's impossible to clean it thoroughly. Otherwise, it requires low maintenance and can be stored anywhere.
Experience
This toy is a good, strong bullet. It's not something really exotic or special. But, for less than ten bucks you get a solid toy. The vibrations are very strong and not very loud.

Yes, the toy is fairly buzzy and is not Hitachi strength, but you really can't compare the two. The bullet is buzzy and can numb your clit or penis during prolonged use, but it's still very effective. The one thing that really bugs me about the vibrations is how numbing it is for the fingers. There is really no way around this problem when using bullets. It's hard to maneuver without holding the toy, but if you do, your fingers get very numb very quickly. It's a great toy for pin point stimulation, but you have to press into the toy, which is very finger numbing.

The bullet is quite quiet. There is a buzzy vibration sound that may be annoying, but won't be heard under covers or through a closed door. It's small and fairly discreet, but the control pack and the cord do make it harder to hide. Speaking of the cord, as I've said before, it's very long (a plus), but it is still there (a minus to me). Even though it was long, I still had issues with where the cord and the control pack goes during use. It really wasn't a huge deal, except when it got tangled in my toy box. The cord is something I've gotten used too, so it's doesn't bother me any more. If it's something that bugs you, there are always cordless bullets, but they are more expensive. Overall, I really liked this toy, and for $8.99, I thought it was a fantastic bargain!
Follow-up commentary   I still like it 20 days after original review
Vroom vroom. My hands do get a bit numb after using this, but I love it! It's the perfect staple to have in my toy box. It's great for using with a dildo!
This product was provided at a discounted price in exchange for an unbiased review. This review is in compliance with the FTC guidelines.