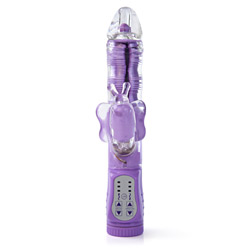 MATERIAL & TEXTURE
The sleeve material which covers the main shaft and the clitoral attachment is constructed of a smooth, clear, TPR, which I enjoy using because it has the softness of jelly/rubber toys without the annoying smell, taste, or other potentially harmful additives. There's some drag to it, but once it's lubed up, it becomes very slippery. It doesn't appear to attract much lint either.

SIZE & DESIGN
Tending to be on the larger size of rabbit vibrators, measuring 9-3/4 long with an insertable length of almost 5-1/2 inches and a circumference of 5 inches (per my measurements), the Waver Butterfly will please size queens but may be too long for some to handle. Weight-wise, it's a bit on the heavy size, but it was still easy to use. The plastic handle, on which the controls are located, is just the right size for my average-sized hands.

The clear sleeve has a somewhat realistic cock-like appearance, including a few folds of skin beneath the mushroom head to provide a little extra texture. Below that, the remainder of the shaft is smooth, but that is where the wave technology kicks in. The clitoral stimulator, which looks like a butterfly with tickling tentacles, is powered by a small purple bullet motor. Lastly, the area where the stimulator attaches to the main shaft is almost too stretchy, causing the butterfly to flit and flutter around quite a bit, which reduces the amount of pressure against the clitoral region.

FUNCTIONS
The control unit is very good and was easy to operate, with no worries about accidentally tripping the wrong switch. The toy is powered by 3-AA batteries which are inserted in a drop out/removable battery tray. The cap is a full-twist on one, which allows for a very tight waterproof seal (gasket is visible). Using fresh batteries of the same make will improve the performance.

There are separate controls for the waves and for the clitoral stimulator, which can be used together or separate. The buttons are flush on the surface and operate via a pressure-pad. Each side has a set of 3 bars which illuminate as the speed increases or decreases. There are only low, medium, and high speeds for each feature, and a button which allows the direction of the waves to be reversed. Holding it in a bare hand, it's easy to feel the wave sensation and say "wow, this is going to feel great!", but unless your vaginal canal is extremely sensitive, it may not be that noticeable. The power of the clitoral stimulator is pretty good, but what takes away from it being even better is the mobility issue I last mentioned in the design section.

As far as noise, most of it is generated by the action of the waves. Using the clitoral stimulator by itself isn't so bad.

PACKAGING & MAINTENANCE
The toy comes in a large box with pictures of a topless sexy model on it and multilingual basic product information. This can be saved to store the toy in, as there's a flimsy plastic tray in which the toy is seated. Only a water-based lubricant should be used and it can be cleaned under warm-water with antibacterial soap or with an approved toy cleaner.
Experience
My favorite part of this toy is the main shaft, because it's completely straight and the tip is soft, so I could thrust deep and not have it hurt. I barely felt the waves though, and the butterfly did nothing for me until I flipped over on to my stomach and had the pressure from the weight of my body to hold the clit stimulator in place. I did not try it in the shower or the bathtub.
Follow-up commentary   I don't like it anymore 3 months after original review
I lost interest in this one, quickly. The noise of the waves got on my nerves and the butterfly just wouldn't sit still where I wanted it too without slipping around too much. It's still a pretty good toy, but it's not going to work for everyone's anatomy.
This product was provided free of charge to the reviewer. This review is in compliance with the FTC guidelines.