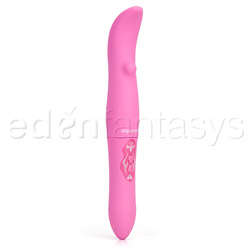 The functions of the Companion are like that of many vibrators that I’ve tried, but it stands out in a far more exciting way. There are sixteen functions, yes, sixteen of them to tickle your fancy and sky rocket you to the moon. And let me tell you, every function is absolutely explosive that it’s unparalleled to that of other g-spot vibrators. The first push button starts off with a loud and intense steady vibration. With each push, the vibration intensified into a louder, and more powerful and orgasmic extreme that will leave you going “WOW.” The second push button is like a concert; first there is just an escalating thump-thump rhythm, then it goes onward to a long rhythmic beat that thumps and glides with a vibrator thrust, and so on with the third. With a fourth press of the button, it pulsates, bleeps, escalates, and vibrates like some kind of harmonic, rhythmic rollercoaster. You can use each function independently, or use them both at the same time. Feel the speed, embrace the rollercoaster, let each one take over you - it’s electric!

If there’s one thing that’s absolutely amazing about The Companion is the length, which speaks volumes for its wonderful versatility and function. It is long enough to share with a partner for double-ended fucking play, long enough to manipulate it with your feet, long enough for your partner to pump and thrust it with his/her mouth, and long enough to handle it on your own during solo-play. At first penetration, you’ll be welcomed to the most sensual feeling of the Companion’s slim member entering inside of you. When turning on both the functions, it is truly an orgasmic and intense vibrating experience.

The Companion doesn’t just tease the g-spot; it practically ravishes it. As it touches the g-spot, the protruded bump massages and teases the clitoris, which feels oh so incredible. The vibes themselves will definitely shake you up, as if an earthquake had attacked your body, leaving you speechless. If one gets over-stimulated by the g-spot play and wants to take a break, you can easily switch to the other end of The Companion, and it feels just as incredible and orgasmic. Using it in the shower, in the bathtub, in the pool, in the Jacuzzi, or outside in the rain also leaves much to the great possibilities and options that this g-spot vibrator can offer.

Every girl needs somebody to love, but even more, a girl needs a companion, The Companion that is. It is the kind of g-spot toy that makes you have a sexy after glow, leaves your body tingling, and makes you wanting to bask in the pleasure with a glass of wine, and playing with it even more afterwards. Seriously, get this one, and you won’t need to desperately search for another g-spot vibe ever again. Whether used alone or with a partner, it will leave you melting and fusing into the orgasmic, erotic, escalating bliss that lies in The Companion.
This product was provided free of charge to the reviewer. This review is in compliance with the FTC guidelines.

Reviewed by Foxxy Kitty (Eden Advanced reviewer) How can I ignore? This is SEX without touching. I'm going to EXPLORE. I'm only into this to ENJOY! -- Björk
Rank
6.5
wrote 142 reviews
Comments
Make a post
Forum
No discussions yet.
Thank you for viewing Companion – sex toy review page!
Top