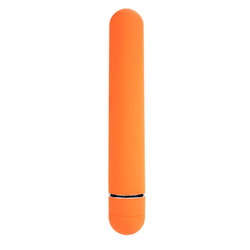 Come on and gyrate, or not.

If this merely claimed to be a powerful classic-style stick vibe with multiple speeds and a velvety surface finish, then Gyrating Lover would easily be a 4 star vibrator (not 5 because it's too loud). But it's supposed to gyrate, and in reality it doesn't do more than produce a subtle throbbing at low speeds, so I rated it 3 stars.
Pros
Powerful, multi speed, waterproof, smooth surface
Cons
Doesn't do what it says on the box, dial control is loose, motor is loud
Rating by reviewer:
3
extremely useful review
Read the entire review
Experience
As another reviewer has noted, this vibe doesn't really produce any kind of thrusting action. At least, not on its own. You can certainly move it in and out of yourself and produce a thrusting sensation that way. The power is in your hands.

But I personally don't think it does much gyrating, either. As I remarked in the comments section on the product page:

"...this thing doesn't really gyrate, at least not according to my understanding of the word. The motor produces deep vibrations that make the top half of the shaft wobble around in a throbbing kind of way, but it's not some huge circular motion. It has plenty of power, though."

Please click here to read my full review, thanks!
This product was provided free of charge to the reviewer. This review is in compliance with the FTC guidelines.

Become a Reviewer
My Gyration Sensations lover tags
About author