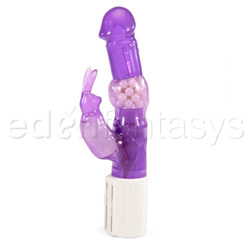 Cute and not entirely useless.

This toy just isn't worth the cost. There are better toys on the market right now and I was incredibly disappointed in this toy.
Pros:
Strong vibration
Flexible rabbit ears
Cons:
Made of Jelly
Rotating beads are easily broken
Shaft is very easily snapped
Noisy
Rating by reviewer:
2
useful review
My partner and I were really excited about purchasing a sex toy online. We had previously purchased our toys at a shop in town, but we liked the variety available in online shops and when this one went on sale, we scooped it up.

We were so excited when the toy arrived that we used it right away. At first, having never experienced a toy like this, I thought it was great. I loved the turning beads and the vibration. The separate, sliding controls for both the vibration and the rotating beads make for great customization while using this toy. Even my partner enjoyed the toy, because the size is not so great that it makes you uncomfortable and the vibration could be turned down pretty low. But after using the toy just once, the beads stopped working. Any clenching or thrusting causes the beads in the toy slow or stop, and eventually burn out, making the beads entirely useless. Not to mention that even if they don't fully stop working, they make a really awful grinding sound when squeezed too tightly! The whirring of the beads the first time was almost enough to give me a headache.

The toy was also difficult to clean, seeing as it isn't waterproof and has a rather exposed battery panel and control sliders. You had to be very careful not to get water into the important parts of the base, which made cleaning it seem like a bit of a hassle. The sliding controllers can also be troublesome when involved in partner play. It is easy to accidentally slip against the sliders and turn it up too high without meaning to. This toy is also pretty loud if turned out outside of your body. Once in, it is harder to hear, but still not silent and certainly not 'roommate' appropriate.
Experience
The one good thing this toy has going for it, that I would certainly look for again in another toy, is that the rabbit is long and really reaches the right places. We recently purchased another similar toy from EdenFantasys and are looking forward to reviewing it to see how it compares to this one.
Follow-up commentary   I still don't like it 25 days after original review
We actually got a second one of these because we had really liked the first one, but the second one broke as well. I'd hoped the first one was just a fluke, but it seems like these are just prone to wearing out very quickly, within a few months at most. I would recommend looking elsewhere for a dual stimulator/rabbit toy.
This content is the opinion of the submitting contributor and is not endorsed by EdenFantasys.com

My Rabbit habit tags
About author