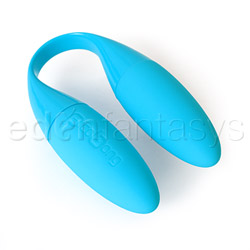 The Mahana is great for rocking and grinding while it's inserted, even if it does not flex enough to hit your clitoris. It has a luxurious silicone texture and a unique color scheme. However, the vibrations are very weak, and it is very difficult to clean because of the flawed battery compartment that tends to collect liquids.

Unfortunately, the cost of the Mahana was a little off-putting, and I really did not want to shell out $70 or so for it. Luckily, I had a chance to get a free one during Picobong's November contest. And I won! Lelo sent me my Mahana straight away!

When I finally got a hold of my Mahana, I was incredibly excited. It certainly is a creative toy, but once I put it to use, I found that I was rather disappointed with it. I could not use it in the way I wanted because the plastic bridge that is keeping the two bullets together isn't flexible enough. I had a hard time inserting it, and no matter what I did, the bullet would just not line up with my clit properly. When I managed to get some sort of clitoral stimulation, it pinches my clit like a vise. Not a very pleasant sensation.

However, I discovered after a few more tries that the Mahana is a wonderful little rocking toy. I insert the first bullet into my pussy, and then just leave the other bullet nestled against my pubic mound (clitoral vibration is impossible sadly). I would then rock back and forth, grinding against my chair. It feels wonderful used this way!

Like my Tano, the Mahana is made of luxuriously smooth velvet like silicone. The U-shaped base on the other hand, is made of shiny hard plastic.

I do love the finish of the bullets immensely, but I think that the shiny hard plastic used for the bridge really detracts from the beautiful feel of the silicone material. This combination also knocks down the EF safety rating to 8, which is a pity since the Mahana is made of really high quality silicone. It would have had the potential to rate as a 10 I think.

I like how the vibe has no discernible smell or taste when coming out of the box. It may vaguely smell like plastic to some due to the packaging, but a quick wash solves that right away.

Okay, so the Mahana actually has very similar design flaws to the Tano, because let's face it, the whole Picobong is really just one bullet design fitted to different bases or something. It's all the same.

While my Picobong Tano comes in a gorgeous shade of hot pink, my Mahana came in a beautiful, almost neon blue color that really stands out from any other sex toy I've seen. I think the sex toy industry should offer more colors like these instead of always going for boring old baby pink and purple.

The design is pretty unique. It has two silicone bullets that are around 1 inch in diameter at their widest points. It screws into a U-shaped plastic bridge made of hard plastic that isn't very flexible. The part where the plastic and silicone meet have a sharp edge just like my Picobong Tano, but since my vagina is a bit more forgiving than my anus, I managed to insert it without cutting myself up. However, it does add a bit of extra discomfort.

The controls are on the insertable portions, and each bullet is controlled separately. It's basically just two autonomous bullets. They run on 1 AAA battery each, and you can actually use only one battery to have only one vibrating part if you prefer. They are completely waterproof, but the battery compartment has a certain issue that makes it difficult to clean. I will discuss it more below.

Now, I could not for the life of me make the Picobong Mahana line up with my clit like I wanted to. The bridge is very stiff and does not flex as much as I want it to. I think the second bullet might also be too long for this job, because it really just overshoots my clitoris and ends up clamping down on top of my pubic mound.

I hear that some women have used this for double penetration by sliding one in the ass and the other in the pussy, but after my traumatizing experience with the Tano, I simply could not get myself to do it.

Fortunately, I discovered that sitting on my chair with the Mahana inserted makes for a fantastic rocking toy. I just sit on it and grind against my chair in a rocking motion, and it really stimulates the frontal wall of my vagina. Really neat!

Unfortunately, I need strong clitoral vibrations to get me off. While I like rocking around with the Mahana, I just cannot get myself to orgasm that way. I also cannot use this toy as a clitoral vibe because it is just too weak! The vibrations are just so soft, it really doesn't do anything for me except provide a little bit of extra stimulation while I rock back and forth. So if I want to climax, I need to remove the Mahana because it gets in the way, and then move on to a stronger clit vibe.

I also hate the fact that the vibration controls are on the insertable ends, so it really puts a damper on playtime because you have to slide it out just to change the settings. Another thing that irks me is that the vibrations will never quite sync up, and since the vibrations from one bullet travels through the bridge and into the other bullet, the patterns get really muddled up so you cannot appreciate them to their full extent. It is quiet though, but I think this is not much of a feat since it lacks in power too.

Just for reference, there are 12 vibration patterns that you have to cycle through individually. I will just copy paste it from my Tano review since it is basically the same:

Basic caring for the toy is simple enough; you just use soap and water and maybe a bit of toy cleaner if you feel like it. It is made of silicone and plastic, so its not completely safe. If you want to use it with a partner, better use it with a condom. You can also only use water based lubes for it.

I suggest that you let the toy dry first by hanging the Mahana upside down. Once everything is dry, use a cotton bud to clean the area between the battery compartment so that you do not get water into the batteries themselves.

The packaging is the same as all of the other Picobong toys. It's a stylish, minimalistic box with nice typography and lovely, easy to understand icons. You can see the toy clearly inside the box because of a clear plastic window.

It also comes with the Picobong die, but I wish that it came with a pouch instead. And maybe some instructions on how to use the Mahana, because it is not the best clitoral dual stimulator out there, and I am not sure what else to do with it. That is a bit of a pity, because I wanted to like this toy a bit more.
Follow-up commentary   I still don't like it 2 months after original review
This is not a terrible toy, but its ghastly flaws leave much to be desired. If it had stronger vibrations, a more flexible stem, and a way to get rid of that GHASTLY seam, this toy would have actually been pretty awesome.

I have recently tried wearing this under my clothes to see if it would work for some mild public stimulation. The Mahana is super silent, so I was sure that I could get away with it. Sadly, the stiff neck simply could not let me wear the Mahana unless I was sitting down and rocking on it. It kept wanting to snap back into its original shape, so it kept sliding out. The seam is also extremely uncomfortable and even sort of "pinched" me when the Mahana wanted out.

I am just very disappointed in this toy in general. It's just not versatile enough for me because of its design limitations. All I can do with it is sit on it to get the best stimulation it has to offer...
This content is the opinion of the submitting contributor and is not endorsed by EdenFantasys.com