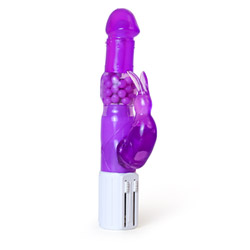 Cute Rabbit with a Short Life-Span

I don't think this bunny is worth the money. Adorable and non-intimidating, this is dual stimulator with a nice size and shape and easy to use functions. I quite enjoyed using it after I figured out how to use it and position it to stimulate my body. However, I played with my bunny for only about 3 months before the shaft broke during regular use, stopping the rotating functions entirely. Overall, I was pretty disappointed with the famed Rabbit Habit.
Pros:
Rotating beads & fluttering bunny ears feel fantastic, phthalates-free, simple operation, no cords
Cons:
Not waterproof, battery operated, both functions on high = decreased power, not durable, expensive
Rating by reviewer:
2
extremely useful review

The Rabbit Habit is made for dual clitoral and vaginal stimulation, and it worked very well for that. For about three months, I was absolutely obsessed with this toy, much like a passionate (but short-lived) summer fling. The design worked exactly as intended: the bunny ears fluttered wonderfully against my clit, the spinning balls felt delicious in the entrance to my vagina, and the tip rotated to gently stimulate my G-spot. It was bliss.

In my opinion, this bunny is best for solo play. It needed to be held at a particular angle and pushed down with some pressure in order to get me off. I tried to use it with a partner, but he wasn't able to position it exactly how I liked it. This just led to frustration. However, your mileage may vary.

This Rabbit Habit is made from a translucent, light purple elastomer - a phthalate free, slightly porous material. It is body safe and has a faint smell if I put it up to my nose, but it is not unpleasant. It is also delightfully squishy, but still firm enough to feel great internally. For me, it is a more pleasurable tactile experience than my silicone toys. However, I have not yet tried dual density silicone which is supposed to be nice and squishy as well. The material has some drag, so you will probably want to use lube with this toy.

There is some texture on the shaft in the form of some small bumps on the back under the head, but I cannot feel them during use. I think the texture would be suitable for beginners or advanced users, unless you are a texture lover, in which case, it might not be stimulating enough for you.

The base is made of a hard, beige plastic, and has the control panel and contains the batteries. The inner core of the shaft looks like it is also made of plastic, as are the beads, which spin around two tracks near the base of the rabbit.

I really like the design of this toy. It has a well-sized shaft and a pronounced, fairly realistic looking head (as realistic as sparkly, light purple penis with a smiley face on it can look). Oh yeah, did I mention it glitters?! Totally girly and cute.

What’s not so cute? Inside the shaft you can see a thin plastic rod that runs vertically and controls the rotation. The manual states this portion can be bent slightly to adjust the curve of the shaft and the diameter of the rotations: wider or more narrow within reason. However, I would not recommend it. I bent mine ever so slightly forwards - less than 1/8 of an inch - when I first got it. I think this may have contributed to the way in which the rotations stopped working a few months later (I write more about this in the "Personal Comments" section of the review).

The two rows of plastic beads that spin around to stimulate the vaginal entrance are also visible beneath the elastomer. These really do add that extra something. The clitoral arm reaches pretty high up and has long bunny ears; if the pearls are inserted then it will probably reach your clitoris. It is also very flexible so you won’t have any issues of too much pressure with this toy. You may have the opposite problem, however, if you need clit pressure or a lot of clit stimulation to orgasm. In order to get the bunny ears to stimulate my clit the way I like it, I had to push the toy in, angled slightly downward.

I think the size of this toy is probably suitable for most people. Still, I wouldn’t recommend it as the first insertable. Thought the shaft is not scary big, it is no skinny minnie either. I was somewhat experienced with penetration when I bought this, but it still required some warm up for comfortable use.

The Rabbit has two main functions. In terms of internal stimulation, it has spinning pearls which stimulate the nerve-rich entrance of the vagina and a rotating head which can stimulate your G-spot. For clitoral stimulation, it has a cute little bunny with a bullet in its body. Depending on the speed, these ears will gently wiggle or flap around wildly. It provides gentle but powerful stimulation that has never caused me any numbness, regardless of how long or how often I used it. Although the rotating shaft didn’t bring me to a G-spot orgasm, the combination of the fluttering ears and spinning pearls was lovely. When I positioned the toy correctly, I could just lay back, relax and enjoy the ride.

The Rabbit Habit has a plastic base that doubles as a control panel and battery compartment. It takes three AAA batteries, so you'll probably want to have extras on hand to avoid running out mid session. For me, a set of new batteries would last a few sessions. However, in the three months I used this toy I went through many (many!) packs of batteries. I would suggest investing in some rechargeables; it will save you money over the long-term and is environmentally friendly.

The control panel consists of two dials: one that controls the bullet inside the rabbit and one that controls the rotating shaft. They are easy to use, intuitive controls, and you can adjust them independently. I love this. If you like strong clitoral stimulation and gentle internal stimulation, you can have that. On the other hand, if you want strong internal stimulation and light clitoral fluttering, you can do that too. The only downside is that when both dials are turned up to the maximum there is a slight loss of power to both. Still, I found the controls easy to use and conveniently located on the base, so I could use this toy with only one hand.

Since this toy is not waterproof, do not attempt to use it in the shower or in the bath. It is best used in bed, possibly under the covers if you have roommates or nearby housemates. It is a bit loud (although nowhere near Hitachi loud!) Playing music or turning on the TV during playtime would likely be enough to cover up the sound.

The Rabbit Habit is fairly easy to care for. Since it is made from elastomer, it is safe to use with either water or silicone based lubricants, although I would not use it with anything oil based. It is not waterproof, so do not submerge it for cleaning! I either wipe it down with a clean, damp cloth, or use a spray-on toy cleaner. I think it would be safe to clean with soap and water as long as you are careful to avoid the base.

The elastomer material does like to collect lint. Don’t leave it lying around, or you might end up with a dust(y) bunny. However, if it does get a little linty, it is easy to clean off; simply wipe it down with a damp towel. I stored it alone in a small drawer, next to my lube bottle, and that worked just fine to prevent it from catching any lint or dirt.

Since the packaging is just a clear, plastic box, you will probably not end up using that for storage. It didn’t come with a storage bag, but if you have an extra one that would probably work nicely as well. If you are going to be storing it for longer periods of time, I would also encourage you to remove the batteries. This way they don’t lose charge without you getting any play in return.

I had mixed feelings about this toy even when it was working. It is battery operated, rather than rechargeable, and is quite the battery guzzler. It is not waterproof, and though it is phthalate free, there are safer, non-porous, sterilizable materials from which toys can be made. The fluttering bunny ears are quite stimulating and powerful, but they lose power when both shaft and arm are activated. I expected fireworks when attempting to put them both on high. Instead, I was left disappointed. Also, I have a tendency to clench my muscles when I’m getting there, which would cause the beads to slow down considerably. As a result, it would sometimes bring me to the brink and then suddenly stop being powerful enough. After some experimentation, I found that turning the bunny to the max, while leaving the shaft around medium-high, worked best for me. I also had to position the toy exactly right, angling it downward to get the right position over my clit, so there is bit of a learning curve. Still, I did enjoy the design and size of the toy. The dual stimulation is a really fantastic experience, and I think everyone should have at some point!

Had my poor bunny not broken after three* months, I most likely would have given it a solid three star rating. It felt great in use, and gave me a good number of orgasms. It is a nicely designed dual stimulator which would probably satisfy most people and is quite a good first rabbit, if you don’t mind spending the dough for something that may not last forever. The fluttering ears can feel quite blissful. And have I said I love the idea of the spinning beads and rotating shaft? Why aren’t more G-spot toys/Rabbits designed with this function?

However, what was once my one and only turned into just a summer fling - and not by choice. After about three months of almost daily use, after I had finally gotten past the learning curve and into the rhythm...it stopped working. In the middle of some routine ‘me and bunny’ time, the shaft abruptly ground to a halt. I was gently thrusting, clenching, and just generally enjoying myself when it started to make these awful grinding, struggling noises. I took it out and realized the shaft had become misaligned. Still, I tried to forge on. But even though the bunny was still vibrating furiously, I just couldn’t get there. The rotations were a big part of the reason why I loved this toy. Without them, it just felt lackluster. Eventually, I had to get rid of it. I didn’t replace it, mostly because I didn’t think it was worth the money. If it was waterproof, rechargeable, a bit more powerful, and the shaft was more durable, I would recommend this toy with no hesitations. But it’s not, so I can't. However, if they made some improvements, I would definitely try it again. I love the simplicity of the functions, the position of the rabbit ears, and the rotating shaft.
This content is the opinion of the submitting contributor and is not endorsed by EdenFantasys.com