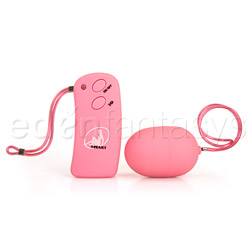 Useless thing! It has literally no use for me. I don't hate it, but I don't have no use for it, so it's really hard for me to like this thing or find it in any way appealing. It's loud, pretty much powerless, and a waste of space in my toy collection.
Pros:
None.
Cons:
Weak.
Loud.
Pretty much useless.
Rating by reviewer:
1
useful review
Literally nothing is good about this toy. I'm so glad it was free.

This toy runs on watch batteries and some other kind of tiny batteries. I had so much trouble trying to get this thing to work both times I tried it.

Look: This thing looked like it would be good and very "pretty in pink". I liked the fact that it was wireless.

Feel: The toy feels like it would feel pretty good. Not good. This thing is waaay too weak. It practically has no power at all! You would think that with the noise of this thing it would at least give decent power but, nope.

Noise: LOUD. The loudest toy ever. I tried to use the toy by sticking it in my masturbator and this thing was sooo loud. Then I tried it by putting the string around the shaft to have it vibrating on my balls. Nope. There was like no feeling and it was louder than inside the masturbator.

Settings: This comes with 3 speeds, followed by a couple of patterns. But as I said, this thing has practically no power so the patterns are basically useless.

If you can find a use for this thing I would be amazed. If my penis says "What...is-is that supposed to feel good or something?" It is pretty much official that this thing sucks. If you guys wanna try this anyway, just get it as a free gift. I literally have no clue what I could do with this thing aside from throw it away.

This thing had a ring type thing inside, which I thought made it water proof, but after pulling it out of my masturbator to clean it, I opened the toy and to my surprise, saw that lube got in even though I tightened it super tight to keep the lube out.
Follow-up commentary   I still don't like it 27 days after original review
I ended up throwing this away. It was too loud, and the vibrations were weak and buzzy. I hate buzzy vibrations. I only kept the batteries it came with since they may be useful in the future.
This content is the opinion of the submitting contributor and is not endorsed by EdenFantasys.com