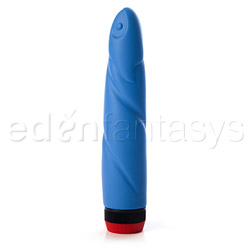 Don't Let This Fish Get Away!

The Pisces is not my favorite toy by a long shot. I really disliked the on/off knob. I thought there wasn't enough thought put into the design. I hoped the ribbing would feel different and pleasurable, but I really couldn't tell that there was a difference. Also, you have to worry about cleaning it. You cannot boil this toy to sanitize it. If you want to clean it with soap and water you have to be extremely careful not to get the controls wet, otherwise you could ruin the toy!
Pros:
Lasting Batteries, Interesting Design, Powerful Vibrations
Cons:
On/off Turn-style knob, Only one function,
Rating by reviewer:
3
extremely useful review

Astrovibe's Pisces can be used by anyone. If you're a beginner, I would suggest using a good amount of lube to avoid being sore afterwards. This toy, in the right hands, could be a great toy for couples looking to spice things up in the bedroom. You could use this little "fishy" for all over stimulation, although I found it just a little too bulky to actually enjoy all the vibrations. As with any toy you may be intending to use anally, caution is advised due to the lack of flared base.

The Pisces is a little loud. If you're trying to be discreet, this might not be the best toy for you. I might also add that you're probably going to want to keep this toy in the bedroom, as it is not travel friendly. The knob on the top (on/off turn style-knob) could easily be jarred and turn on at an inconvenient time. Not to mention that it would be a little hard to keep in a purse due to its size.

Pisces has no fish smell that I can detect! All joking aside, I cannot smell this toy, which is a major plus. There is nothing worse than a stinky toy. The silicone used to make Pisces is food-grade material, latex-free, and phthalates-free. The matte finish makes play time easy and fun. Be sure to use only water-based lube when indulging yourself. You wouldn't want to ruin your new toy! I did notice during play that I had to stop and re-lube once or twice before the job finished. Be careful not to over lube this toy. There isn't a lot of drag to begin with, so if you over lube that might cause some problems for you.

This toy also as a few interesting grooves in its material. At the very tip of the toy, you'll see it actually looks like a fish, and the ribs travel all the way down to the very base of the toy. While some women rave about the different textures, I cannot feel it when it's inside. Although the outside might be a little different story. I'm not a huge, huge fan of nipple stimulation, it does add a different feel when using it on other areas of the body.

First off, I would like to say that I hate whoever designed this fish! I feel like we are back to the beginning stages of vibrators. They decided to put the controls on the very base of the vibrator, in the old style turn-dial controls (on/off speed control dial). During play I was constantly adjusting and re-adjusting the speed. I kept bumping the dial and either turning it way up, or almost turning it off. Anyone who has been really close, and then had your orgasm stolen away because your batteries died- this is just as bad, and just as frustrating. Although, I must admit that I love the powerful vibrations I received during play.

The blue, 8 inch from head-to-tail toy, is fairly ridged, but has some give to it so you can play rough if you want without fear of ruining your toy. This is one good fish, with a 7 inch insertable shaft, with a 4 1/2 to 5" graduated circumference. I found it a little bigger than what I am used to using during play time. I used a lot more lube than I usually need, but it did get the job done!

As stated before, the size of this toy makes me very hesitant to travel with it. I cannot imagine how embarrassing it would be going through the airport and having my baggage looked through then to have someone picking this up! Or looking for something in my purse, and it falls out! There is no way you someone wouldn't recognize for what it is, so I would suggest leaving this one at home.

The Pisces is one big fish to swallow. It’s not the biggest toy out there, but by far the biggest one's I've ever caught. And by far one of my least favorite toys yet! Not only was I hoping the ribbing on the outside of this toy would create more pleasure, and feel different than others than I have used before, but I thought it would be a lot more fun in the sack.

I hate the on/off dial (which also controls the speed). I would start to get into a good groove, and start to really enjoy myself. BUT! then as I moved, the vibrations would change, so you take a second to re-adjust and begin again. Well, after the fourth or fifth time of having to do this, I basically wanted to toss it aside and just use my fingers! They should have made it so it clicked into place. What a total bummer.

You can hear this toy though closed doors, so if you're looking for privacy, you better just wait until your alone. If you do find yourself with a bit more time than you anticipated- don't worry, this toy will give you lots of time to enjoy yourself. The 2 AA batteries seem to last quite a while. I would say this toy will last at least 3-4 hours (longer if you take the batteries out) You'll know when the batteries are getting low. The vibrations start to get weak, then slowly come to a stop.

Handle with care! When you lube this fishy up, it's a slippery little sucker! I actually dropped it once before play. It was simple enough to wash it off. I just used soap and water. You have to be careful to not get the controls wet or you might ruin the toy. If you don't like soap and water you can always use your favorite toy cleaner or a 10% bleach solution to get the job done. The Pisces cannot be boiled, as you might damage the on/off speed control dial.

Be sure when you get out your lubes, that you only get water-based lubes, you wouldn't want to damage the toy. You'll also want to keep it away from other toys, or store in a toy pouch, to keep it from damaging your other toys.

The Pisces is NOT waterproof! So use some caution when cleaning. I keep this toy stored in the plastic case it came in. This way it stays away from my other toys. As an added bonus, it keeps it from collecting lint!

The Astrovibe's Pisces is packaged in a box, so that you can see the actual toy from the outside of the package. Mine has a small blurb on the back of the package, that describes the texture of the toy, as well as other products, and how to clean the toy.

The toy is enclosed in a plastic cover, it also includes a very limited instruction pamphlet basically telling you how to put the batteries in. Although I had to really search for the English instructions!
This product was provided free of charge to the reviewer. This review is in compliance with the FTC guidelines.