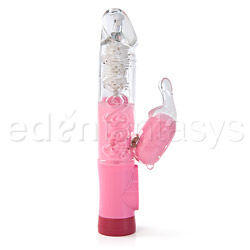 Doubly Innovative, Only Half Pleasurable

The Double dare 4-play isn't so original that it will win over the rabbit haters of the world but the discs are unique enough that folks who like rabbits may want to take a second look at this one, especially if you like rabbits with beads-on-arms.
Pros:
Unique gyrating discs, less bulky than most rabbits, easy to use controls.
Cons:
Weak bullet, too much give in the clit stim, TPR picks up lint, texture is so-so.
Rating by reviewer:
3
extremely useful review
Packaged in a no-frills plastic tube, the Double Dare 4-play already had a leg up over the competition: it took up much less space. Out of the box, the entire toy feels less bulky than similar rabbits. It measures 9" from end to end, with 6.5" being insertable. It's a medium sized toy with a 1.5" diameter throughout most of the shaft. The lip of the head is the widest point of this toy with a diameter of 1.6". Although the battery pack is comparable in length to other rabbits, it's only slightly wider than the shaft, giving it an appearance and feel that seems dramatically smaller - in a good way. The Double Dare 4-Play doesn't feel nearly as unbalanced as most rabbits do and my short arms have a much easier time grasping the base.

The shaft and clit stimulator are both sheathed in clear TPR which has a slight gasoline smell at first (the norm with TPR toys), is porous (so no sharing) and attracts lint but can be used with either water or silicone based lube (which is necessary because the material creates friction). Down the length of the shaft are embossed "S" and backwards "S" shapes to add texture but this was unnoticed by my girl parts. There are two ridges beneath the bulbous head. The battery pack/controls are ABS plastic. The batteries fit into an EZ-insert style pack and the cap screws on securely for a waterproof experience which makes soap and water cleaning a go. From the end, there is a plastic gem, displaying the company name (NMC). Some may find it cheap, but it's sort of cute.

Through the clear TPR, the rotating discs are clearly visible but it's not immediate obvious what they do. The shaft has gyrating discs to create a "spiral motion" as described on the package insert, not a wave motion like most discs. The 18 white discs have softly rounded corners to provide stimulation without being painful. Although it's hard to tell without taking apart the rabbit, the discs seem to be star or flower shaped. The wire on which the discs are attached rotates while the discs themselves gyrate. The sensation is not entirely unlike rabbits with beads on mechanical arms and I'd suggest the Double Dare 4-Play for anyone who is fond of that sensation. The discs held up well during clenching.

Additionally, the wire on which the discs sit can be bent so the entire shaft rotates but I suspect this is not the intended purpose. Doing so may likely damage the toy in time so I'd recommend doing so with caution, if at all.

The clit stimulator didn't entirely win me over. This bunny has separate ears which vibrate and can be placed on either side of the clitoris, if desired. I prefer to situate the bullet itself over the clit for a more pressured sensation but found the bunny's slightly pointed nose to be uncomfortable. In addition, the TPR where the bunny attaches has a lot of give so it simply cannot sit snugly against the body. Although, the egg in the bunny appears to be the jumbo kind that produces a higher quality vibration, I found the vibes to be too buzzy on both settings, probably because this toy is powered by 4AAA batteries. Most people will probably find them sufficient but my clit is pretty picky and requires deeper vibrations.

The controls on this rabbit are easy to use and remind me of those on an MP3 player. There are 3 slightly raised controls which make an audible click when pressed. The master on/off is a round button with the power sign on it. It turns on both functions at their lowest intensity. Each function also has a half circle shaped button. The top button is for the clit stim and turns it to a higher intensity, then off if it's already on. It can be used to turn on just the bullet if the toy is off. Below this, is the disc control which switches direction or turns on the back-and-forth motion for a total of 3 settings for this discs. Everything can be turned off by hitting the power switch. The controls are perfectly responsive and easy to use even when they're not visible. This toy is quieter than many rabbits and increasing one function does not detract from the other.

Because of the weak clit bullet, this toy is really best used as 4-Play for me. I could only get off it I take out the rabbit, turn it around and press is against me with force which really negates the purpose of it being a rabbit. It would be awesome if someone made a straight shafted toy which did the same thing as the shaft on this piece so I could use a different clitoral vibe with it.
This product was provided free of charge to the reviewer. This review is in compliance with the FTC guidelines.