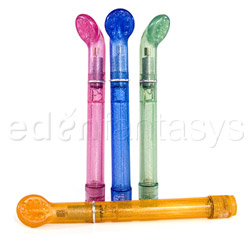 The Clit Exciter has become one of my favorite purchases to date. It's not as discreet as you might like, and it kind of looks like an alien's finger or a shower head, but the vibrations it packs more than make up for its interesting design. This toy is made for clitoral stimulation, but I've also found it works quite well for vaginal and nipple stimulation as well. The toy is long enough that you can easily play with different areas, but I don't recommend anal play due to the fact that the toy is not tapered in any way. You don't want any late night emergency room visits from accidentally losing it! The tip of the toy forms a small cup with nine small nubs to stimulate other areas of your clitoris. I absolutely love rubbing the nubs over my clitoris and then rubbing it all over the rest of my labia. The Clit Exciter has a dial-based switch, which means you don't have the inconvenience of accidentally turning it off at the wrong moment, and you can adjust the vibrations slightly.

This toy is good for beginners as well as those who have already experimented with clitoral stimulation. This is the sort of vibe that's easy to let a partner control, or is just as good to use by yourself. It's actually worked the best for me internally, rubbing against my g-spot just right. This vibe has done more than advertised.

The Clit Exciter is made out of strong, hypo-allergenic, food-grade plastic. I didn't notice any sort of scent when opening this product or during use. The material is very hard, with not much give to it. This is one toy that is not bendable. The completely smooth texture and the non-porous body give this toy a sleek, streamlined look. There is a single silver-colored ring towards the top half of the toy, which may be there to help keep the rotating motor stable.

The tip of this toy has a lovely curve and features small nubs surrounding a small dip in the center designed to cradle the tip of the clitoris. There is no easily visible seam to the toy, and it can only be felt under careful exploration outside of play.

I loved the design of this toy. The Clit Exciter comes in many colors, but I chose the green model. The design looked interesting outside of the box, but it soon made much more sense after using it for the first time. The odd look of the tip was designed to stimulate, which I don't mind one bit. I've actually taken to calling it my "little green friend". The size of this toy is just large enough to not be subtle, but it also allows for easier movement and even comfort. It's easy just to lay back and hold this toy with your wrist resting on your hip bones. This toy is very easy to hide, and I've been able to travel with it quite easily.

The only part I don't like about the design is that the plastic is so see through you can see the batteries within it. Maybe it's just me, but I don't like having to watch my battery choices when I'm looking at my toy.

The control system for this toy is at the very base of the shaft, with a rotating dial. You rotate the dial counterclockwise and the motor kicks into high gear, with even the lowest rotation speed making a very loud buzzing noise on my desk. I've noticed three different intense speeds, with a low/middle/high vibration. For only two AAA batteries, this packs one hell of a punch. Luckily this is also waterproof, so you can help drown out the sounds of even the highest settings.

This vibe doesn't have any changes in the type of vibrations it gives. It's just one continuous stream of vibrations. I've not found an intensity level on this vibe that couldn't make me orgasm.

This is a plastic toy, so the easiest way to maintain it is to wash it in either isopropyl alcohol or with antibacterial soap and warm water. This can be used with any lube, and is very easy to store. I always use my favorite toy cleaner and a washcloth after every play session, and I always keep mine in a drawer filled with scarves to protect it from getting chipped or broken.
Follow-up commentary   I still like it 2 months after original review
It is still very effective, and it hasn't shown any wear or tear at all. It has gotten no chips or scratches, even when used in conjunction with other toys.
This product was provided at a discounted price in exchange for an unbiased review. This review is in compliance with the FTC guidelines.