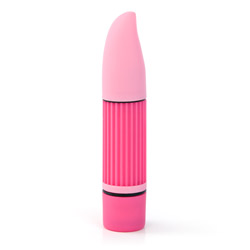 This is a decent, yet underwhelming vibrator. It serves, but does nothing more. The definition of a three star product.
Pros
Decent speed, head is not floppy.
Cons
Does nothing very well, only average.
Rating by reviewer:
3
useful review
I must admit, I didn’t have all that many expectations for this toy, but I decided to give it a try anyway, hoping to be proven wrong. This little guy may seem like no big deal when you look at the package, but when you pull it out it is…still no big deal. It came in standard packaging for this sort of thing, and really failed to impress from there. I may just be jaded from having reviewed several vibrators, but I just didn’t find this toy anything more than average. This is not to say that the toy is bad, as we’ve certainly had much much worse, but it just doesn’t do anything to stand out.

The shape is fairly standard for a small G-spot vibe, although it’s a bit more still than what we are used to. Whether or not you prefer a firmer or softer toy is a matter of personal preference, and it really didn’t make much difference to us. The toy has a row of ribs a little further down from the head that really didn’t serve much purpose. G-spot vibes aren’t really meant to be twisted, so the ribs don’t provide any stimulation from twisting. It does help a small bit to grip it if it becomes wet (which is pretty common), but not really enough to warrant to design. Visually, it’s very ordinary. It is standard pink on top of standard pink.

In terms of performance, it is once again, very average. It is actually a little underpowered for a G-spot vibe. It would be fine for a clitoral vibe, but it’s not. The motor is also a little loud for the output. We have definitely seen much quieter vibes with more of a punch. It’s not to say that we didn’t have fun with it, but again, it could have been much better.

This would certainly be an ok vibrator, provided it was cheap. There are many better products on the market, but If it’s what you’ve got, you’ll still enjoy it. We were a little hard on it in the review, but we were just unimpressed by the features. There are 5 different functions, but again, they are just the standard three speed and two pulse delays. If you’re interested, you make enjoy it, but for most people, I’d recommend you keep searching.
Follow-up commentary   I still don't like it 7 months after original review
I can't say that we've used this toy much since the review. It just doesn't distinguish itself in any way. If it really strikes your fancy, it works well enough, but we just can't recommend it.
This product was provided free of charge to the reviewer. This review is in compliance with the FTC guidelines.