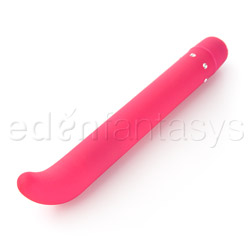 Gets the job done!

I would recommend this to anyone, from those new to sex toys, to the seasoned veteran! The price is right and it will satisfy even the most picky of vibrator users.
Pros:
Slim
Water-proof
Multi-speed
Cons:
Noisy
Rating by reviewer:
4
useful review
My wife and I really hadn't gotten into sex toys in the bedroom until we were into our late 30's. She was raised very conservative, and that kind of thing was looked on as "bad." Finally being fed up with the usual "vanilla" sex, I decided to purchase a few things online and give it a shot. The Crystal chic G was one of the first things I purchased and presented her with.

We were in the shower and I asked her what she would think about using something on herself while I watched. I showed her the Crystal chic G, knowing that it was waterproof and safe to use. I also knew the slim design would make it easier for her to consider trying it. She first turned it on and checked out all of the speeds and settled on the lowest to start out, unsure if she would even like it. After a minute or two of gentle caressing, she smiled and began to really enjoy it. She tried some of the other settings before settling on the most intense one, and began sliding it inside her vagina.

It was pure ecstasy for her! I was glad we were in the shower, because the noise from the Crystal chic G is a bit louder than we expected, and the running water and exhaust fan hid what was going on from our kids. In the end, it was a great toy to start out with, especially for those who are inexperienced and timid about using a vibrator. Multiple speeds make it good for finding out if you just need gentle stimulation, or if you are a vibe queen who has to have it as intense as it gets. The price also makes it an affordable, entry level toy if you aren't sure if your significant other will be into it or not. We have since purchased several other vibrators, but this one is a sure-fire bet for my wife when nothing else can get the job done!
This content is the opinion of the submitting contributor and is not endorsed by EdenFantasys.com