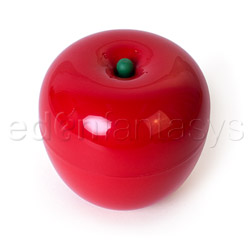 I guess I should have learned a lesson from Snow White. This apple looks great on the outside, but it isn't so good on the inside. It's not a poison apple like the one from the story, but it did almost send me into a deep sleep. The vibrations just don't do anything for me!
Pros:
Unique and attractive design, discreet, rechargeable, and comes with covered charging base.
Cons:
Not strong enough, a bit loud, seam, only splashproof, annoying controls.
Rating by reviewer:
3
extremely useful review

The Forbidden Fruit is splashproof but not waterproof, so it shouldn't be used in the shower or underwater.

The Forbidden Fruit is made from red plastic. It's non-porous, phthalate free, and hypoallergenic, and has no smell. The plastic is hard, which is great for applying pressure. It has a smooth, very glossy surface which slides across the skin easily, so you most likely won't need to use lube or massage oil with it. There is a slightly raised seam around the middle of the toy, interrupting the glossy perfection. I can feel it when it is rubbed against my skin, but it isn't rough or painful at all.

The stem is made from silicone. It has some drag, which allows for an easier grip. There are small metal charging contacts recessed into the base, so they won't come into contact with the body.

The Forbidden Fruit is larger than most real apples, at about 3 inches across. The shape and size work well for stimulation of the entire vulva, or for rolling across and applying pressure to muscles. It fits comfortably into the palm of my hand. The toy is quite light for it's size. The top half feels like it is hollow, with most of the weight at the base.

I think this toy is a bit bulky for travel, and it's not something I would toss into my purse, but you could certainly fit it into a suitcase for a longer trip if you would like.

The toy is controlled by the stem, which acts like a joystick. To turn the toy on, you press down on the stem for one second. It will turn onto the lowest constant setting. You can increase or decrease the speed by pushing the stem towards the + or - symbols. You can access the patterns by pushing it towards the ~ or .. symbols. Pressing the button down during use will take you back to the low setting. To turn it off, you press the stem down for 3 seconds.

The controls weren't totally intuitive to me, and this is one of very few toys where I actually had to check the instructions to figure out how to do some things. Once I read the instructions, the controls seemed logical, but I still have some issues with them. The symbols aren't raised, so you need to stop and look at them to change the vibration settings. They aren't backlit, so you won't be able to change the settings in the dark.

I also had some problems with turning the toy on and off. It worked most of the time, but occassionally the toy just wouldn't react, or would accidentally go into the patterns instead. I think the problem was caused by me pressing the stem slightly to the side, instead of perfectly straight down, or by not pressing it hard enough. I wish there was a separate power button to make it easier to turn the toy on, and especially for those times when I might need to quickly turn it off to avoid an embarassing situation.

The Forbidden fruit comes locked, and needs to be unlocked before use. Hold the stem down for 5 seconds until the light flashes and there is a pulse of vibrations. If you'd like to lock it for travel, hold the button fown for 5 seconds again, until the light turns off. The locking feature also worked most of the time, but not 100% of the time for me.

There are 5 strengths of steady vibrations, along with 3 speeds of pulsing and 3 speeds of waving. You can adjust the strength for the patterns.

I was disappointed with the Forbidden Fruit's vibrations. I was hoping they would be similar to Matryoshka's, but they are weaker and louder. They aren't ridiculously loud, but can definitely be heard through a door. This is a problem for me, since I live with others. The vibrations do not travel well through the seemingly hollow toy. They are strongest at the base. The vibrations have a very electronic sound and feel to them, where it almost seems like a really fast pulsation rather than a steady vibration. The vibrations are medium in pitch - not super buzzy, but not rumbly, either. I need strong vibrations, and these really don't do much for me. I can easily feel them, but I don't get any pleasure from them. I almost gave this 2 vrooms, because I've given 3 vrooms to some toys that could just barely get me off, and the Forbidden Fruit doesn't even get me aroused. But the vibrations aren't ridiculously weak. They feel medium in my hand, but just do nothing for my clit. I think it's mainly the type of vibrations that doesn't work for me at all.

The Forbidden Fruit charges wirelessly by setting it on it's charging base. The base has a cover, which is perfect for discreet charging. You'll need to attach one end of the cord to be back of the base, then choose the correct adapter from the 4 provided, connect it to the other end of the cord, and plug it into the wall. Forbidden Fruit uses the same cord as Matryoshka (another Rianne S. toy) but they use different bases.

You should charge the Forbidden Fruit for 8 hours the first time. After that, a full charge will take about 2 hours, and will last up to 3 hours of use. A light will flash while the toy is charging, then turn off when it is fully charged. The instructions warn not to leave the toy on the charger for more than 24 hours. The light will also flash to give you warning if they battery is about to die during use.

The Forbidden Fruit can be cleaned with soap and water, or toy cleaner. Since it is splashproof, you can safely wash it under running water. The manual recommends water based lube, but plastic is also compatible with silicone or oil based lubes. Plastic toys won't react with other materials. You can store the toy in it's charging case, or in the included pouch.

The packaging is quite nice, and would make a lovely gift. The box is plain purple with just the company name printed on it. It comes with a paper sleeve with an artistic photo of a model holding the toy, with a naked man's back visible in the background. It also has a bit of product information. Once this is removed, the box is very discreet.

Inside the box, the Forbidden Fruit rests inside it's charging case. You can pull a ribbon to easily remove it. Beside that is an inner box. It contains the instructions, warranty, and a pamphlet about the Rianne S. line, along with the charging cord, 4 international adapters, and a storage pouch.

The instructions are basic but helpful. The warranty is for 1 year, and you can either email the manufacturer, or return it to the place of purchase.