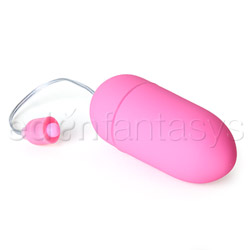 On the plus side, the texture (smooth and somewhat velvety) is quite pleasant, and it's fairly quiet (which, living in a dorm, is a must for me). I have to admit that it's pretty cute, but cuteness does not make a good sex toy.
This content is the opinion of the submitting contributor and is not endorsed by EdenFantasys.com