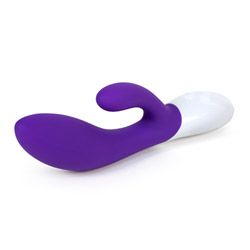 This toy is the Ferrari of sex toys. I have yet to find a toy that works better for my preferences and my anatomy. This is yet another excellent purchase from Lelo and is worth every cent I spent on it. This toy work extremely well for me, but some of its properties may not be ideal for everyone. The toy is easy to use, easy to clean, powerful (without any buzzy vibrations that leave you unsatisfied or itchy).
Pros
AMAZING silicone finish
Multispeed
Multiple patterns
Dual stimulation
Waterproof
Powerful
Cons
May not work for all anatomies
Expensive
Rating by reviewer:
5
extremely useful review

The material is silicone for the insertable portion as well as the clitoral arm (10) and the handle is made of plastic (8). The silicone finish is one of the softest materials I have EVER felt. It has virtually no drag, it is completely seamless, it is smooth, velvety, and luxuriously soft. The silicone has very little give to it so it will maintain its shape once inserted. When I say the silicone is soft and smooth, I mean it. In comparison to the Life by Leaf, and the Tiani 2 by Lelo, it is not even a competition. These vibrators are all considered to be made of luxury silicone - which they are, but the Ina 2 is just softer. I have not had any issue with hair or dust clinging to the material and it also repels water. Silicone is nonporous, and is an incredibly hygienic material. Remember to only use water based lubricants with this toy. I would not even recommend a silicone and water hybrid because I wouldn't want to ruin the amazing finish!

The design is something that I love about this toy, and really all Lelo toys. It may not work well for everyone's anatomy or preferences, so that is something to keep in mind. For my preferences and the way I am built, this toy was a dream come true. This toy's shape gives you extremely deep and rumbly vibrations without any numbing or itching sensations. It is curved for extra pressure on the G-spot, and the clitoral arm bends for optimal placement. Some women do not enjoy pressure on their clitorises, but for those who do, this toy is ideal. This toy gives enough pressure to keep me satisfied but not so much that it is painful. I have heard it described as feeling like it is "clamping" down on your clitoris, which I would say is accurate. I view this as a pro more than a con because I need a bit of pressure in order to climax. The size of the toy was much smaller than I thought it was going to be, but I think for most the size will be ideal. I think most rabbit style vibrators are too long overall, but this one hits me exactly right!

The functions of this toy are pretty versatile. The toy has 4 buttons on the plastic handle, an up button, down button, left button (-) and right button (+). The plus and minus buttons control the speed where the left and right buttons control the patterns. It is hard to tell how many speeds there actually are one this toy because when going up in intensity, the transitions seem pretty smooth but according to the description there are 8 speeds. The patters are: 1) G-spot only, 2) clitoral arm only 3) alternating between clitoral and G-spot, 4) pulsating 5) escalating 6) escalating 7) random. It's hard for me to tell the difference between the 2 escalating patterns but for those who really enjoy patterns I would give them a try. Personally I don't care about patterns and I generally stick to continuous vibration. As far as noise is concerned, for it's power is is very quiet. When it is inserted I can't hear it under a blanket, which is great for those who have room mates! This toy is waterproof, but it I would be cautious if you want to use it in the bath or shower. The sealing portion over the charging port seems a little precarious to me, so when washing I haven't had an issue but I haven't tried it in the shower or bath because of it. The toy is rechargeable which for me is great! My other vibrators before this one have been battery powered and I would need to replace them every few weeks. This toy has lots of battery life and will flash when it is running out of battery.
When charging the toy's controls will also flash, but will remain solid when it is fully charged.

The best part of this toy: The style and type of vibrations. This toy has by far the best vibrations of any toy I have ever used. Every toy I have ever used has left me numb, itchy, and desensitized after I used it. I would also end up having a sore clitoris which made me question even using them. This toy has never once made me feel that way. I had always been a fan of sex toys, but this is the first one that has ever been able to satisfy me when I am not around my lover. I love the style of vibrations as much as I love the finish of this toy. I feel like a queen when I use the Ina 2!

Caring for this toy is pretty easy. Because of its material and waterproof ability, you only need to wash it with soap and water. As I mentioned before I would only use water based lubricants because the toy's finish is so magnificent I would take no chances with it. I would not even spot test it personally, but if you really love your lubricant then try at your own risk! For storage, I typically store it in the box it came in, which is a plain black box with the Lelo insignia on top. The toy also comes with a silk bag that can be used for storing. At risk of damaging the finish, I would recommend keeping it stored away from other toys, but as you can probably tell by now, I am obsessed with the finish of this toy!!
This content is the opinion of the submitting contributor and is not endorsed by EdenFantasys.com