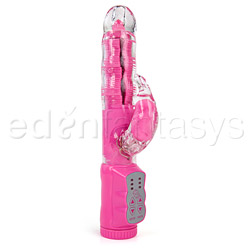 The Slimline Passion Wave has a great design, but the relative newness of the technology means the controls are simple and to the point. If you like new functions and a varied collection, definitely buy a waver toy. In my opinion, it's better than traditional rabbits, and I don't think any toy box can be complete without at least one waver. Truthfully, I doubt I'll buy another traditional rabbit when I can have this.
Pros:
Incredibly unique sensation; Consistent g-spot massage; Stable mechanics; Waterproof.
Cons:
Coating mutes waving sensation; Speed-only controls for the shaft; A bit loud.
Rating by reviewer:
4
extremely useful review
A disclaimer: I actually bought a slightly different version than the one above. I wanted to independently control the waver, so I bought the Slimline Passion Wave (it's the same toy, by the same manufacturer, but without the clitoral attachment).

At first go, the Passion Wave was a little bit confusing; it took a bit of adjustment to correctly place it. Like many rotating rabbits, the Passion Wave is best used towards the beginning of the vagina where most of the nerves are. Use it too deep, and it's difficult to feel the ripples of the toy. Plus, the ripples are only on the top four inches of the shaft. Once I found the right placement (and got it to stay there), it was pleasantly enjoyable. Best of all, I didn't notice it struggling like some rabbits to make a complete rotation of its gears. It never once acted as though it were an old car trying to make it up a hill.

I bought Cal Exotic's Slimline version of Orion's Waver Bunny because I am exactly the opposite of a size queen. I don't like anything over 6" long and usually not over 1.5" in girth. (I refuse to go over 1.75".) However, I think waver toys should be the exception. The thickness and elasticity of the TPE/TPR coating means you'll want a more "tight" fit in order to get the best rumble for your money. The smaller Slimline was satisfactory, but it left me really wanting to know what a thicker version would feel like. If you're even less of a size queen than I am, this will probably do just fine. As for that coating, it's very elastic. I was able to shift about an inch of it away from the tip of the toy. It's not tight like many rabbit vibrators' coating, but you shouldn't fear it'll rip in mid-play either. As with most TPE/TPR coatings, it does easily attract lint and hair, but it isn't 'sticky' as some low-quality toys are.

I have only tried this toy vaginally. It's not bad laid against the vulva and clitoris, but it shines when used for penetration. Even though I think it was too slim, it still managed to massage my g-spot (which isn't too common for me). As far as g-spot massage goes, I think wavers are probably some of the best toys for it. It far outweighs any vibration-type g-spot toys I've tried simply because it relies on actual massage rather than vibrations. I just never let it take me to orgasm on its own; I either became impatient (it's great at slowly ramping you up) or started out with a clitoral toy plus the waver. I have a sneaking suspicion that a thicker Waver will do the trick.

There are three settings and the ability to make the waves go upwards or downwards. The latter didn't really seem to matter either way, and I mostly used the max speed setting for the waving motion. The differences between speeds are slight with the lowest feeling like a gentle massage and the highest a more robust one. I also have not tested its submersible quality (though a video on Youtube is proof enough for me), but the battery compartment hasn't gotten wet when washing in soap and water. I also don't notice any areas that might be prone to leaking.

If you're worried about someone overhearing you using the toy, you have some cause to be concerned. It is a bit loud, but it might not be heard through a door depending on your "grip." When I clenched it with my hand, it did have a horrible grinding noise to it similar to rabbits, but it wasn't one I noticed during use. I'm not sure anyone could clench on it enough to recreate the noise in-use unless they'd been training with ninja kegels. I haven't had the toy drain the batteries in mid-use, so that shouldn't be a concern for most. Overall, a pretty good toy.
This content is the opinion of the submitting contributor and is not endorsed by EdenFantasys.com