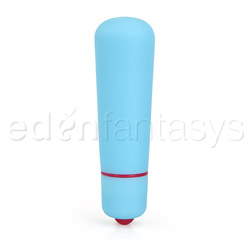 The Intensity bullet is a great bullet for anyone looking for something with strong vibrations in a small package! I would recommend this toy to anyone looking to add a little bit of fun into their collection!
Pros
Strong vibrations, smooth and attractive appearance, small and discreet size.
Cons
Only one vibration speed.
Rating by reviewer:
4
useful review
The Intensity bullet was much more intense than I thought it would be! I have had other bullets before that turned out to be very weak, and not very enjoyable. So when I first tried the Intensity bullet by Shaki Toys (a company I had not tried prior to this), I was very impressed by the bullet's initial strength. The vibrations, in and out of water, are just enough to get the job done!

The velvety material of the bullet feels very smooth and gentle on the skin, in addition to giving the bullet a very nice appearance. I have had bullets in the past that were finished with the metallic shine which would wear and peel off over time, leading to a very unappealing appearance that made me not want to use the toy.

When I first got the Intensity bullet, I had not told me boyfriend about it first; with its small size, I was able to hold it and keep it covered, while I surprised my boyfriend with it by massaging his testicles while the bullet vibrated in my hand. He never saw it coming, which made the stimulation even more exciting.

Also, with its small size, I am able to hide it in the small side compartments of my purse allowing me to take the bullet with me no matter where I go. This was a problem before since my boyfriend and I do not live together. With other bullets that were connected to the speed controls, they were not as easy to transport and there were times when I accidentally turned them on while reaching into my purse. The Intensity bullet has one small button at the top that needs to be pressed relatively far down before it is turned on.

The only issue I have with it is finding new batteries. The toy uses 1 LR1 battery. After using the vibrator for about a month and a half, the vibrations started getting weaker so I started searching for new batteries. However, after searching the battery section at many local stores as well as special camera shops, I still have not been able to find the battery. Of course you could order them on-line, but the inconvenience of not being able to just go and get them is a bit annoying.
This product was provided free of charge to the reviewer. This review is in compliance with the FTC guidelines.