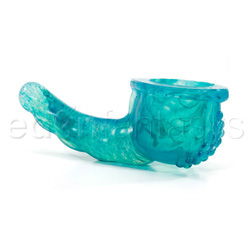 The Gee Whizzard is, in our view, an essential upgrade for anyone who has a Magic Wand. It will extend the life of your toy and open your play up to a whole bunch of new opportunities.
Pros:
Great design
100% silicone
Vesatile: can be used on him or her
Cons:
None
Rating by reviewer:
5
extremely useful review
Most g-spot toys can easily be used as a p-spot toy as well (provided they are anal safe!). Obviously these two wonder spots are not in the same place, but the way you get there , even if by different channel, is very similar. The Gee Whizzard by Vizen is no exception to his rule of reciprocity; it is just plain exceptional.

The Gee Whizzard is made from 100% platinum silicone. This non-porous material can be sterilized between partners or uses which is a very nice characteristic, especially because the ball head on the Magic Wand cannot be sterilized. Vixen recommends boiling for three minutes to rid this attachment of any bacteria. General cleanup can be done with soap and hot water. The silicone is very flexible so it slips easily onto the ball head of the wand. The Gee Whizzard holds on tight though and I have not had any issues with it coming off before I was ready for it to be removed. It is also soft and resilient making it super comfy for anal play. Finally it is easily inserted due to the denseness of the silicone which holds the curve of the toy perfectly.

The Gee Whizzard is the perfect attachement for extending the life and versatility of your Hitachi Magic Wand. It takes what was once just a surface massager and turns it in a penetrative toy suitable for vaginal or anal play. It also enhances hygiene because the attachment can be sterilized which the old head on the Magic Wand cannot. The Gee Whizzard is expertly designed to extend the strong vibrations of the Magic Wand to the g-spot or the p-spot. The excellent craftsmanship that went into creating this toy means that this attachment, with proper care, will last a lifetime. If it doesn’t the good people at Vixen will replace it for free under their lifetime warranty, just hold onto your receipts.

Whether you choose to use this as a g-spot toy or as a p-spot toy, we are sure you will have fun. We think it is a ‘must-have’ toy for any Hitachi Magic Wand owner.
This content is the opinion of the submitting contributor and is not endorsed by EdenFantasys.com

My Gee whizzard tags
About author