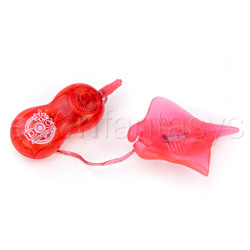 When I first received the toy, I immediately put in batteries and turned it on to see if it was quiet enough for my little experiment, and sure enough it was. Unfortunately, the small vibrating bullet, which is neatly tucked inside the jelly- like TPR silicone, didn't feel quite as strong as I had hoped it to be. Nonetheless, I thought I'd give it a shot.

The first issue I encountered was attempting to adjust the clear plastic straps. This was difficult and I spent considerable time trying to get both sides just right- and once I did, the device just didn't sit tight enough or firmly enough against me. I slipped my pants back on, sliding the wire and remote upwards though my pants and slid the remote in my pocket. And with a jacket on, no one would notice the wire running from the top of my waistband into my pocket. I switched it on, and to my surprise the light sensation was a bit ticklish but a slight turn on too. I proceeded for the next several hours running errands and doing some light puttering around the house. It somewhat met my expectations - it was fun and thrilling, but unfortunately, not orgasmic.

In my third attempt with this toy, I was determined to orgasm! With a long, quiet evening ahead of me, I lit some candles, put on some music, and got to work. I tried to raise and lower the settings to make it feel as if the vibrations were coming in waves - and for a while I thought I had found the right groove, but alas no results. I attempted to readjust the stingray, flipping it around so that the tail was on top - but that failed to work for me as well. I flipped it again, and held onto the straps so that the bullet was directly on my clit, but that too produced so-so results. I was just about to give up, when I decided the pressure was just too light. So I used my hand to hold the stingray in place - and voila! Results!

This toy was fun, but for me, required a bit too much effort to achieve the desired effects. Although I do love the design and concept, I personally require a stronger vibrator. I think this toy would be perfect for those who are average to sensitive to the touch, or who get off with a light flicker of sensation. I feel this is a perfect toy for those who are just starting out experimenting with toys and want something pleasurable, quiet, and cute.
This product was provided free of charge to the reviewer. This review is in compliance with the FTC guidelines.