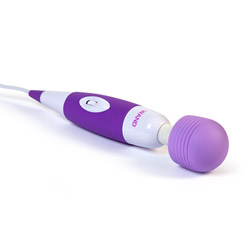 Time To Replace The Caddy ! Wouldn't You Know It, OW's Found A New Boy Friend !

The Eden Wand should satisfy the majority of women. It has a big advantage over the MWO (Magic Wand Original) with it's power intensity control dial. It can be used on the glands of a penis, on the nipples, and with several different attachments.
Pros
Electric powered
Easy to use and clean
Pinpoint power setting
Appearance.
Cons
Could be stronger to satisfy even those with "Clits of Steel ".
Rating by reviewer:
5
extremely useful review

According to Wikipedia, wands have long been recommended for "Anorgasmia" by sex therapists. Anorgasmia is the term for "Sexual Dysfunction". In simple words, the inability to achieve the much treasured orgasm !

Back in the late 60's the original wand was invented for relieving tension and relaxing muscles. We purchased our first wand in the mid 90's for my back. They are great for backs and necks! Of course my wife, OW, tried it on her clitoris and discovered it was fantastic. Soon it sat on her nightstand instead of mine. She used it so much, I nicknamed it "Her Japanese Boy Friend !"

The Eden Wand has a big advantage over the MWO (Magic Wand Original) with it's power intensity control dial. It can be used on the glands of a penis, on the nipples, and with several different attachments. Pictures of the 2 popular ones, a G-spotter and male masturbator, are included in the review. 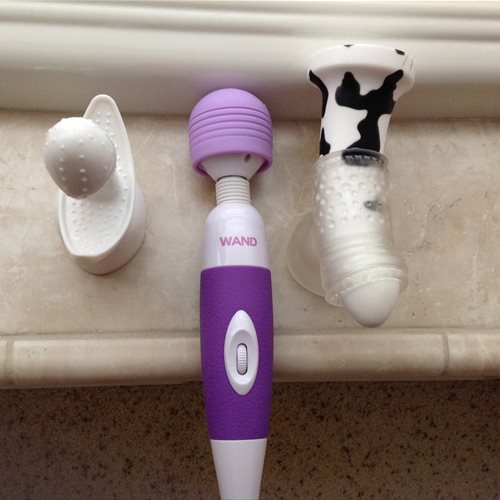 The Eden Wand's massaging head is made of hard ABS and coated with a polymer. So the actual vibrating head is soft, yet firm. I would characterize it as between soft plastic and silicone. So with this coating there is not this hard plastic rubbing your love button to oblivion. It is soft, but not spongy like the MWO (Magic Wand Original).

The PU coating is Phthalates-free and either silicone or water-based lube can be used, if desired. It is said that lubricant on the head/clit makes for an even better experience.

The actual body of the wand is hard plastic and has a PU coating in the middle for a superior grip.

The PU coating has no smell whatsoever. It will not attract any dust or lint nor will it eventually get dirt imbedded in the head, like the MWO. The MWO is more foam-like and has "Granular" lines in it's head.
I have included a pic, but not sure if you can see the dirt on the MWO's head. It was originally all white. 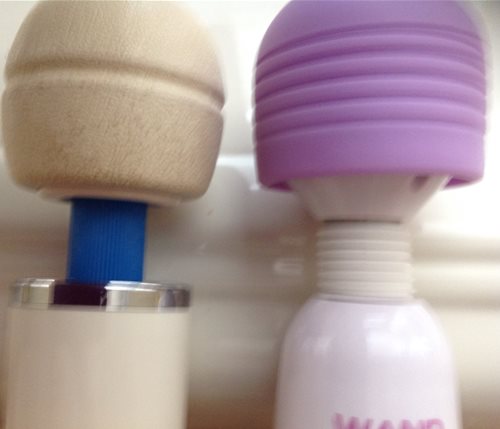 As for the texture, OW said she can't feel any difference between the two. Will work fine for all users.
Also I have used it on my penis glands and found it comfortable and pleasureful.

Both wands weight minus their long power cords are slightly over 1 lb, with the MWO being a little heavier. I did not include the weight of the power cords, since one would only hold the actual wand. The weight did not bother her since it lays on her body while in use. You can position on a few stuffed animals if you don't want to hold it. (see pic) 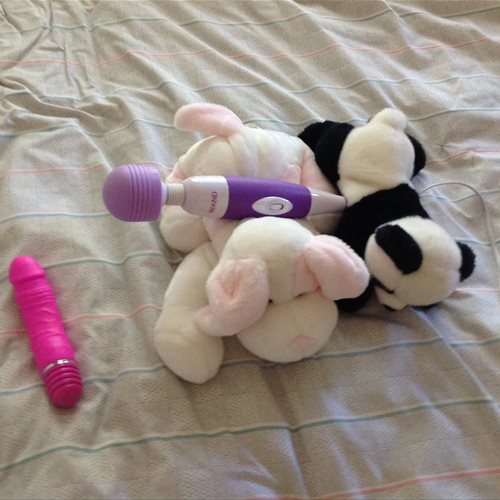 OW says the Eden Wand is easier to hold being skinnier and tapered. The lower end is cone-shaped, also making for a easier grasp.

The head is 2 1/4 wide and 2 1/4 long. It is not meant for vaginal insertion. There are attachments for this, though. Here is a pic of the Eden Elements dual stimulation attachment. We will have a review on how that G-spot attachment performed. 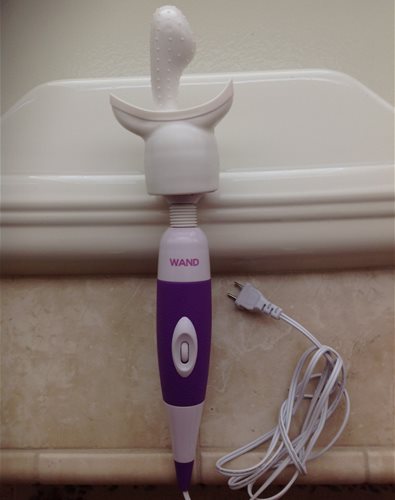 Behind the wand's head is a flexible neck. About the middle of the body is the power control dial. This dial also has treads on it to pinpoint it's ample power.

The wand measures 13" from head to end. OW doesn't have long arms. She said wouldn't have minded if it was little longer while using lying down. Or if the control dial was closer to the end of the body. For those with longer arms, it should be fine. Of course the thrill it gives makes up for having to reach a little to change the setting. Of course if one is sitting up while playing, it would fine.

It has a 67 " power cord. Plenty of cord for any size bedroom.

I suppose if we are traveling, it would be better to pack this in my suitcase. In hers a TSA agent might crack a smile or give her a wink. It does have the word "Wand" imprinted on the body.

As advertised, one of the best features of the Eden Wand is it's controllable power dial. With 2 1/2 turns it goes from low to high. There is a click when turned on or off. It's highest intensity is fairly powerful. Our defunct rechargeable wand had settings with patterns but none as powerful as this Eden Electric Wand.

As mentioned, Eden's control dial is a big plus over the MWO. The MWO's control settings are on a rocker switch. Only low on/off high. Only 2 choices, far more inferior compared to the Eden Wand. With the dial, one can pinpoint the intensity. With the MWO, one is pretty much stuck with either low and high. 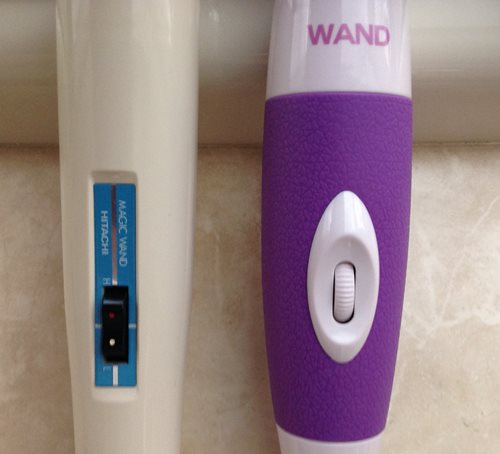 This makes the Eden Wand great for all users from beginners to those with "Clits of Steel".

The vibrations of the wand are on the sides of head, and only the head is waterproof. The toy of course, being mains/electric, can not go in water.

On the highest setting the wand is loud, but that's due to power, not poor construction. Our bed is 14 ft away from the door. On high, a hum can be heard thru the door.

Even though there is a lot of power, the wand will not shake out of your hand. The Eden Wand started getting warm after 40 mins and fairly warm around 52 mins.

The PU coated head is easy to clean. This is important to those using lubricant while vibrating the clitoris.
We put a little water-based lube on the head also when using attachments.

The MWO's head would be much harder to clean if using lubricant. It's head is porous and has grainy threads. Debris and bacteria will get lodged in it over time. Ours is no longer the original white color.
The head on the Eden has ridges, but they are wide enough though to use a dedicated toothbrush to clean.

The body can be cleaned with a toy wipe or wet towel easily. We wash the head in warm water and antibacterial soap.

Her wand is stored in her night stand within the arm's reach of course. If you have any jelly toys, (ick) keep them away from other toys including your precious wand. Jelly can in time discolor or ruin other materials.

Eden Wand came in a shipping envelope. EdenFantasy had a 40% discount on attachments at the time I placed the order. There are 6 available attachments. We chose the Eden Elements dual stimulation. The wand was wrapped in brown paper. The dual stimulator, clit & G spotter were in a separate cello bag. We recycled all of the shipping materials. There were not any instructions with either items. We used EF's webpage for any details we required.

Simple! Wipe with toy cleaner, plug in, turn dial, enjoy! Don't forget to position a towel to catch any fluids! 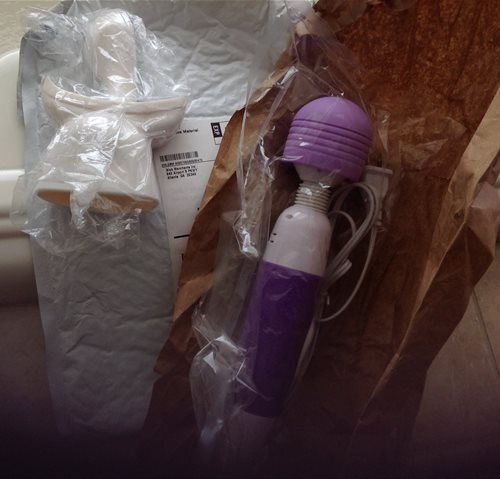 The Eden Wand is definitely superior to it's rival, MWO. Having a dial intensity makes it our main wand. It's easier to hold and use. If you wanted an after market intensity for your MWO it would cost you about another $20.00. This currently is on sale on EF for $49.00 and ships for free. The MWO plus intensity control would set you back about $75.00.

This should satisfy 95% of wand users. If you have never used a wand, this will be perfect ! If your vibe is just not doing it for you, get one of these !

The other night I left the Eden wand in my office to complete this review. When it came time to play, OW asked, "Hey, where's my Eden Wand ?"

OW tested this wand for a month before reviewing. She is a definite "Advanced" wand user. She had doubts if it could complete with her long time boyfriend, the Hitachi Wand. Also, her last rechargeable wand failed after only 3 months of use. In its defense, she did use it 4-5 times a week.

The first session, she started by laying back on a few pillows and buzzed away while watching TV. After 10 mins, she laid down totally and placed the wand on her clit. She said it felt nice. Her other wand's head is starting to dry up. She started on low and dialed it up and down to get acquainted. After 20 mins I did the dip test with my finger. (In her vag, in case you didn't know what my dip test is.) The results were, she was aroused. After 40 mins she said the body of wand was getting warm.

The next few sessions, she would use it for warm up before turning her attention on me. From past experiences with the other wand, it could take her about an hour to reach orgasm. However, no O with her new friend yet. At least none that she would admit to. Remember, she doesn't like to admit to me when a toy makes her cum. Guess she's afraid to hurt my feelings. Just some serious arousal as verified by my finger. After about 50 mins of use, she would put it down and grab another toy from her night stand. Lately it's been the Tango , Infinity or Bendable Buddy. Or grab her other wand. The Eden Wand became too warm to hold.

The next session I position the wand on the 2 stuffed animals. This way she would not have to hold it. That worked very well. She had a small O, but it took about 65 mins.

Last weekend, having more time and the next few days off, we decided to have some serious sex. She laid out a towel under her as a precaution. In the past she could really wet the sheets if came a lot.
She started with the Eden Wand on low and proceeded to increase intensity. We also put on a sexy movie. After 30 mins she was fairly wet. Next she grabbed her Eden Bendable Buddy, turn it to a dancing pattern and inserted it. The EBBV has gotten her off before, so we knew the combination would bring results. In a few mins, she let out a big "Aaahhh-Ohhhh!"

I'm not sure who was more overjoyed, her or me. She then gave me super oral to insure I could be all I could be. Then yelled, "Quick, put it in !" To my enjoyment, I discovered she was super-super wet. The wettest I have ever felt. Needless to say, I came "Buckets" in her. Good thing we laid that towel out.

Last night she used the Eden G spot attachment, but that experience will be in a separate review. I will say, she had a very big smile on her face the entire time.
Follow-up commentary   I still like it 5 months after original review
Great ! Just love the dial control. And it's easier to maneuver than the H wand.
The latter seems so head heavy compared to the Eden Wand !
This product was provided free of charge to the reviewer. This review is in compliance with the FTC guidelines.

Reviewed by OH&W, Lovebears (Eden Advanced reviewer) Life will go on with or without us. Enjoy it while you can.
Rank
6.2
wrote 103 reviews
Comments
Make a post
Forum
Thank you for viewing Vibrating wand massager review page!
Top