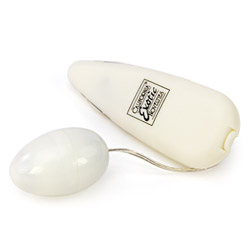 Who knew something so small could pack such a punch?

Remember Easter egg hunts where you got candy an occasionally a dollar or two? Now, imagine instead getting powerful vibrations in a small and easy-to-operate design. That's pretty much the exotic glow egg. It's a handy and impressive toy, especially for its size.
Pros
Strong vibrations
Small
Easy to store
Cons
A little loud
Hard to hold onto on highest setting
Rating by reviewer:
4
extremely useful review

The glow egg can easily be used solo, but I get the feeling it would fit well into partner play for people who enjoy a little teasing. It can be used a few different ways. It could be held directly to the body or tucked between the legs for a slightly more hands-free approach, since its size and shape make that pretty easy.

Its size makes it mobile and travel-friendly. It can easily be tucked away quickly if it needs to be, which is essential for people like me, who have friends and family walking into their house without warning.

The egg and its controller are both made of smooth plastic. The cord between them is fairly long and feels sturdy. There is no real texture to the egg, but there is a seam across the middle. It's not uncomfortable and doesn't irritate any sensitive areas.

There is no noticeable odor to the toy. The design is very simple.

The egg is small enough to fit in the palm of my hand, so it can be used to focus attention specifically on whatever part of the body you're going for. It's not particularly heavy, but can be a little uncomfortable to hold on the higher settings, and very difficult to hold on the highest setting. I'm not sure if I can call that a complaint though, since that's totally to be expected considering the shape and power.

Traveling with it shouldn't be a problem because of its compact size, but it's not easy to disguise. I mean, how easy is it to explain away a vibrating egg and remote? It'd be a little tough to pass off as a back massager.

The remote is simple. It has just one control, and that's the dial to increase or decrease the speed of vibration. The dial is easy to turn and the increase and decrease are gradual and easy to control in small intervals. Because of how convenient and simple it is to use, I would say that it would be fine for beginners.

The highest vibration is a bit hard to hang on to because of the egg shape, but that's a small price to pay for how strong it gets.

The one thing that bothered me is how noisy it is. One of the reasons I bought it is because the volume averaged about a 2 in a lot of the reviews, but I'd call it either a 3 or a 4, depending on which setting you're on. The highest setting is about as loud as my mini mite, and anyone who owns a Pipedream mini mite probably knows what that sounds like.

This toy is not waterproof. I should not have to mention that, considering its design, but I feel obligated to state it outright anyway. It can be used pretty much anywhere though. It's small and can travel with you.

Obviously, the battery end should not get wet. The egg, I wash carefully with a rag and an antibacterial toy cleaner. I wouldn't rinse it under a faucet or anything like that, because you wouldn't want water leaking into the top where the cord attaches.

The cord can be wrapped around the battery pack/remote and it can be stored in a drawer or anywhere else toys are stored in your home.

The hard plastic egg can be used with a lubricant.

The package is simple and easy to open. It's not practical to use as storage though, and wouldn't serve as a good gift box. It comes with a small paper with battery instructions.
Follow-up commentary   I still like it 11 months after original review
This is about the same as when I first got it. It's powerful and easy to use. I don't use it that often because the design just isn't my usual, but when I do, I know I can depend on it.
This content is the opinion of the submitting contributor and is not endorsed by EdenFantasys.com