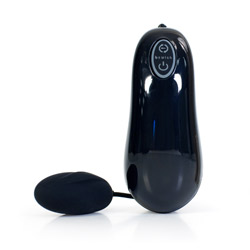 Why be nice when you can Bnaughty?

The Bnaughty Deluxe is the original Bnaughty in a little black dress. With seven functions and a wide range of vibrations, the Deluxe is a great gift to give or to keep. The AAA battery-powered motor is virtually silent without sacrificing too much vibration strength for discretion. The ergonomic light-up controller and little grooved bullet leaves little to be desired. It's safe to go in the shower, but be wary around bathtubs.
Pros:
Discreet, quiet, chic, satisfying vibrations
Cons:
Does not seem to be truly waterproof
Rating by reviewer:
5
extremely useful review

I highly recommend this shiny, chic, Sex in the City version of the original Bnaughty to beginners and connoisseurs alike. The wide range of vibration strengths and rhythms guarantees that nearly everyone will find something they like. The AAA-run motor, however, can only deliver so much power, so if you love the strength of a Hitachi, this toy may not reach your standards. On the bright side, the motor also runs very quietly, so it's perfectly discreet even if you share living space with roomies who don't care to know the contents of your toybox or what you do with them.

Both the bullet and the controller are made of shiny, smooth, black plastic. A band of silver plastic runs around the equator of both pieces. The resultant shape of the bullet is easy to hold onto, and gives more stimulation when inserted than a perfectly smooth bullet. Beginners should have no trouble with this tiny bullet.

The Deluxe has quite a few improvements in design over the original Bnaughty. For one, the controller is less chunky. The Deluxe's control is ergonomically shaped so that your thumb easily finds the groove where the two control buttons lie. The bullet is also smaller and more streamlined. Those who prefer big, macho bullets may think the Deluxe wimpy, but the tiny shape does not sacrifice power for finesse. Inserted, the Deluxe may not be as filling as some may prefer.

The Deluxe can't be mistaken for anything other than a suave bullet, but its diminutive size doesn't call attention to itself. It even comes with a black drawstring bag for storage. If you want to take it with you for the holidays, just toss it into your suitcase with a pair of AAA batteries and you're ready to enjoy your break!

The controller for the Deluxe has a flap that lifts out to reveal the battery compartment which fits two AAA batteries. Sliding the flap back in after the batteries are loaded is a tight fit, so make sure it's securely closed, especially if you plan on taking the Deluxe to an aquatic environment!

As mentioned before, the controller has two ergonomically positioned buttons. The first is a power button, which turns the Bnaughty Deluxe on and off. Who doesn't appreciate an emergency off button when the unexpected and unsuspecting roommate strolls in? Turning the toy on does not immediately start vibrations, but both buttons will light up and stay lit until the toy is turned off. The second scrolls through the vibration functions. When it reaches the last setting, another push of the scroll button takes you back to the first setting.

Bnaughty Deluxe has 7 vibration settings, three more than the original Bnaughty. The first three modes are steady vibrations at low, medium, and high strengths. The remaining four are roller-coaster, slow thump, fast thump, and random thump. Even the highest setting, which is reasonably strong, is virtually undetectable from behind a closed door, or even across a larger room. While my roommate sat on one end of our modestly sized dorm room, I sat at the other and dangled the bullet from my hand while I fiddled with the settings. At the highest setting, she could hear a faint whine, and only if she was listening for it.

The Bnaughty claims to be waterproof, which was troubling to me at first because there are none of the obvious signs of waterproof-ness that I usually see in other toys that make such a claim. The lid of the battery compartment has no rubber lining to keep moisture out, and the junction where the power cable enters the bullet likewise has no stopper. However, casual use in the shower has not led to deterioration of the toy's performance, so the Deluxe seems to be splash-proof at the very least. I would not recommend submerging this toy in water.

To clean the Bnaughty Deluxe, simply wash with warm water and soap, or use your favorite toy cleaner. Let it dry, and then throw it into its drawstring bag for discreet storage. Plastic is compatible with both silicone and water-based lubes, so use whichever you like best. If sharing with a partner, it's best to cover with either plastic wrap (not the microwavable kind!) or a finger of a latex glove.

I thoroughly enjoyed using the Bnaughty Deluxe. I delight in smaller toys, and the Deluxe met and exceeded my expectations for a tiny bullet run on AAA batteries. I do wish that the vibrations were a little bit stronger, but I was fine with what the Deluxe had to offer. One of the things I love about BSwish products is how giftable they are with their alluring but classy, not trashy, boxes. The Bnaughty Deluxe is a perfect gift for any gift-giving occasion, but an especially nice gesture to someone who's curious about toys but who has never owned one.

Bnaughty
$28.99
This product was provided free of charge to the reviewer. This review is in compliance with the FTC guidelines.