The Bloggess: We have a winner!

And a lot of very strange people who read this as well.
("Strange" in a good way though.)

We have a winner!

Remember last week when I wrote about investigating a Tokyo “love hotel” as an International Sex Correspondent in Japan? 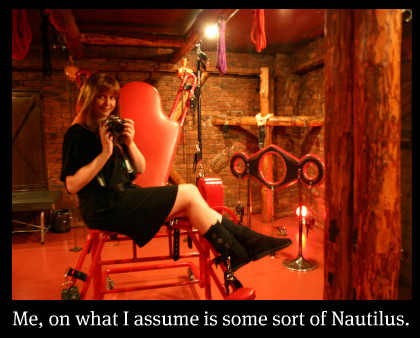 And remember how I rode on a sex pony that I named Agatha Christie but first I put down a thick layer of toilet paper because …ew… “sex pony”? 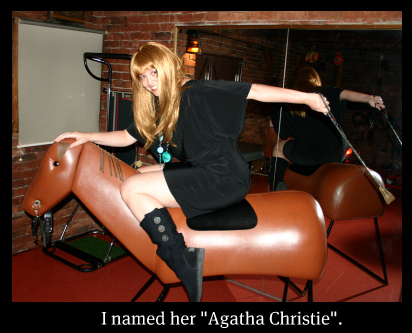 And remember how I found that weird sex appliance (?) and I couldn’t figure out what it was but it was sticky and I screamed a little when I touched it and I decided to have a contest asking you guys what it really is because I thought it would be funny?

Well, turns out that you are really very funny. And a bunch of freaks. Honestly, some of your answers were so detailed I couldn’t even follow them and I had to create drawings of what I thought you were trying to say just to figure it out. And even then I still didn’t understand and also Victor says I’m no longer allowed to use the while-you-were-out phone pad until I can “learn to use it like a grown-up”. Because grown-ups don’t draw cartoon doodles of people using horrible sex appliances with large question marks around them. Apparently.

Anyway, I was just planning on choosing and announcing a few winners randomly but honestly these answers are too good to not share. I recommend reading the whole thread but in case you’re pressed for time, I’ve narrowed it down to my top 12 favorite answers to the question of: What the fuck is this thing?

So you lie it down on the floor so it looks like some crappy broken running machine off freecycle/a hospital bed. The plastic pony stands in the middle and eats the plastic grass in front of his face cause, you know, everyone likes snacks. And then someone holds onto the handlebars on the front and kisses plastic pony on the nose cause some people are into that. And then on the back is a rack where you can keep your pony combs and ribbons and shit so the dudes into that can do that to his tail. And then, I dunno, freestyle hand-jobs around the perimeter.
~ bbkf


You can tell from the little wheels that's it's a bondage car that your pretend kidnapper uses to take you to the 'dungeon'. The astro turf is actually meant to represent the countryside flashing pass the window as you're whisked into your new life of depravity. And I think the little loops next to the astro turf are cup holders.
~ Svaha


Well first of all is that an artificial grass carpet? Perhaps it’s for role-playing as puppies in which case you need grass scenery. I hope they don’t pee on it. Omg it could be for peeing. It could just be an assigned area for golden showers. That doesn’t explain the lube on the bar, but my thoughts on that are it was left behind by someone else, using the machine inappropriately. Because it’s for peeing.
~ veronicasweet


Maybe some people really want to receive an upside down kiss (ala Spiderman) while practicing their golf swing?
~ Meg Turlington


I believe the hotel once had a whole football star/cheerleader roleplay room with a scale field covered in astroturf and a gym full of exercise equipment. Unfortunately it never caught on so they kept cutting it down to make room for other fantasies and now all that is left is the last chinup bar on top of the last rectangle of turf.
~ David Tillotson


I'm thinking this is for people who have a fetish for the Brady Bunch and handstands. As they get whatevered upside down on this thing, then can breathe in the delicious scent of the astro-turf, taking them back to when marcia/greg's (or both!) asses were as tight as their pants.
~ Cheryl Heitzman


I'm pretty sure that it's just for drying your clothes... you saw the clothes-pins right? That's probably totally a fetish in Japan... naked, forced, laundry hanging, while being beaten with a whip and riding a plastic pony. I bet Agatha Christie has seen more than her fair share of crying laundry maids! And also, the astro turf is there for that authentic outdoor feeling. You’re welcome.
~ aluraceleste


Isn't it the thing they used to wheel Hannibal Lecter around on? With optional astroturf just to make him feel slightly less depressed about being in jail with only 1ply toilet paper and no one to play backgammon with? Happy people are less likely to eat you. That's what my mom always said.
~ Sandy Mandy


When you have an itch and can't scratch it, it's torture, right? Now, imagine you're naked, your hands are tied to the top and the itch is on your bottumular region. The surface of that stretched fabric would be lightly lubricated, meaning you can't work up the necessary friction to scratch the itch. The astro-turf is there to cunningly remind you that the sensation on your feet is what you want on your arse, only you can't! Those wily Japanese and their overly complicated and curiously fetishistic displays of sexual obscurity. I salute them, really.
~ hatstrap


It's a Bonerflex. Pretty much self-explanatory if you knew anything about Japanese culture.
~ realmountainvalues

And that’s why guys are awesome. And very, very strange. But mostly awesome. Winners of the Hello Kitty vibrators and Geisha books were the ones who made me laugh loudest: bbkf, deb0ntherocks, Sandy Mandy and Hatstrap (if for no other reason than for introducing me to the word “bottumular”, which I will try to work into every conversation I ever have again).

Have a bottumular day, y’all.

[Winners, contact the awesome Victoria with your address, so you can get your prize! Victoria@edenfantasys.com]
Tags:
Views: 1058
Related articles