The Bloggess: The Most Unsexy Male Lingerie Ever

The Most Unsexy Male Lingerie Ever

Someone sent me a link to this last week and…yeah. I don’t even know where to start, y’all. 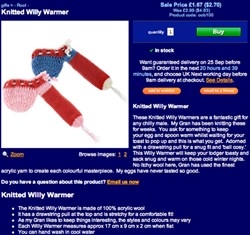 It’s kind of like a toaster cozy. But for your balls. And the rest of your junk. Apparently. And I guess it sort of makes sense because men have shrinkage when their junk gets chilly so if you warm it up in your ball-cozy it’ll be bigger and your girlfriend will be very pleased except that now you don’t have a girlfriend anymore because she just saw your ball cozy.

Seriously, guys, don’t do this. It’s a terrible idea to begin with because…ew…ball sweat. Plus it’s not even that sexy and- OHHOLYGODOFTHEBEARDEDCLAM.

Huh. Well, apparently if you leave the dick-warmer site up it will randomly change images to show you different color patterns. Including this one, which just scared the shit out of me: 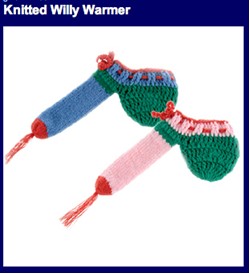 I don’t know if there’s a name for that pattern, but I’m guessing it’s “peeing blood”. Which is fitting because if I saw one of those on my husband he really would be peeing blood because I would stomp on his man parts with a boot. His own boot. And his other boot would be on my fist so I could pummel him with that too. And not because I’m so adverse to knit ball-fashion that I’d beat my husband, but because my first thought would be that his junk was being attacked by some sort of colorful snake and I love my husband’s junk and would instinctually stomp the shit out of that snake. Except that I don’t have boots to stomp snakes with because I’m always barefoot and there’s no sense in me getting bitten on the foot too because then we’re both fucked. So instead I’d grab his boot and punch the shit out of that snake with my booted fist. Except apparently it’s not a snake so he’d probably over-react and start threatening to divorce me again even though technically I’m kind of a hero, jerk. But on a positive note, the bleeding would be less noticeable with that model of ball warmer. These are the risks you take when wear crocheted genital warmers, asshole. This is why you don’t see women walking around with knitted genital warmers. Because we’re not assholes. 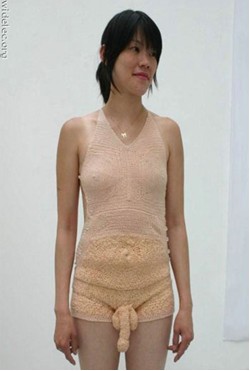