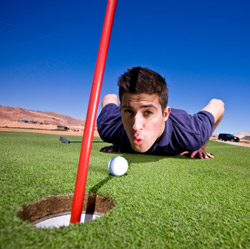 This week, Sexis' own friendly e-neighborhood sex surrogate takes on a BIG problem—penis size...or, rather, the size of men's anxieties over penis size.

I don’t know about you, but I love surprises.

You never can tell what a man’s penis is going to be like just by looking at him. I’ve hooked up with a 6’4” guy with huge hands and feet, only to discover he has an average size penis. I’ve been shocked to find out the 5’7” Asian man with delicate features is a show-er, not a grow-er.

The other day I met with a new client, an attractive, fit 34-year-old. Usually, I get a clue what’s on a client’s mind prior to meeting him, but in this case I had no idea what his issue was. This appealed to me. I was going to get a surprise.

The Long and the Short of It

We met at a coffee shop, and took a walk in the park. Settling down on a bench, he took a deep breath and nervously admitted that he felt his penis was too small. When I asked him why, he cited two main reasons:
1. A girlfriend in high school drunkenly mocked him, telling him he had a little dick.
2. His current girlfriend cheated on him with another man.

He told me he avoids being around other men in the locker room obsessively, and that he was finding himself getting more and more into a fetish called SPH, or small penis humiliation.

Naturally I asked him how big his dick was. He told me he wasn’t sure, and wondered if I would give him an honest opinion.

“Fine,” I said. “Let’s make another appointment for a more private session so I can assess your equipment.”

The following week, we met at my home office (that would be my bedroom), and he was even more nervous. We talked for about 20 minutes, until he felt relaxed enough to whip out his unit. I was eager to see what all the fuss was about.

His dick started out semi-hard, and I asked him to stimulate it for me. He obliged me, and it grew erect. I didn’t bother measuring it, that’s stupid, but it was about five-and-a-half inches long.

NOTE: The average penis length is five to seven inches.

“Really?” He seemed astonished at my verdict. I wondered if he was hoping I would point and laugh; I mean, since that was turning him on these days.

He happily fondled it like a schoolboy until I firmly told him to put it away. We talked for another 20 minutes or so. I informed him that while I did not have a degree in penisology, I most certainly considered myself an expert on the subject. I have had hundreds of penis playdates. I know my dick. I told him that out of all I’d seen, I only encountered one micropenis, and his was not it, so he should go home and jerk off in celebration.

I shared my micropenis experience with a couple of my girlfriends. Ruefully, I admitted that I was only 20 at the time, and wish I’d handled it better. After sleeping with its owner once, I was so mortified that my pinkie finger was larger than his dick that I avoided him.

Both my girlfriends exclaimed that they had encountered micropenises at a young age as well. One said she was drunk and teased the poor guy; the other asked her date if he was inside her yet, and when he said yes, she laughed with surprise. We all hung our heads with shame and offered up a moment of silence to the three men we likely scarred for life.

“Speaking of scarred, did you ever see that western movie Unforgiven with Clint Eastwood? Remember how that cowboy cut up a prostitute for giggling over the size of his little pecker? We’re lucky that didn’t happen to us,” I pointed out solemnly.

If there are any young men or women reading this article, please learn from our mistake: DO NOT TEASE A MAN ABOUT HIS PENIS. His ego is too fragile. You may forget about it a week later, but he will thrash fretfully in his nursing home bed over it in 60 years. Drastic proof: see my interview with a man who calls himself Mike Rowedick. It reads like a Greek tragedy.

Such a refreshing change from the size queen on Twitter I follow who constantly bellyaches about “Mr. >7” and how “it’s a shame such a big beautiful cock fails to satisfy.”

So besides mean drunk chicks, do you know who else is to blame for every man in this country worrying about his penis size?

That’s the message a male friend of mine took home, anyway. When I asked him how big his dick was, he replied, “Seven-and-a-half long and about a Red Bull can in diameter. Nothing to crow about, but it has served me well enough.”

Let me repeat something here:

The average penis length is five to seven inches.

I got with a black man one time who apologized in advance for his seven-inch show-er cock. I exclaimed, “Why the hell are you apologizing?” I mean, talk about a buzzkill! He said he worried about being a disappointment in the size department, since all black men are supposed to be hung like horses. Now that’s a lot of horseshit!

It’s insane how the degree to which men obsess over their penis size. There’s an entire website called The End of the Penis Size Debate that spans 60 pages, with details like: How to measure a woman’s pupil dilation in order to truly gauge her feelings upon sighting a penis.

Check out this seriously misguided advice given to men with small penises:

You don’t have to worry about not giving her maximum vaginal pleasure, because you won’t. Problem is solved. You are left to enjoy the party by yourself. Look at your penis and say how much fun he is going to give you. Not her, you. Don’t listen to other’s advice that you should concentrate on good technique and other ways to satisfy your girl. That will only confirm in your head that you are not good enough. Don’t ruin your pleasure by trying to pleasure her.

Oh, and one more point I should make about penis size: THERE’S NOTHING YOU CAN DO ABOUT IT. No pill, pump, cream, or exercise will enlarge your penis.

But there is something you can do about your mindset: You need to quit letting the outside environment interfere with what is going on right now in your bedroom.

That’s advice from my primary partner. He has an average size dick, but it’s on an above average man. Plus, I can take it in every orifice, which equals unlimited joy.

So pants off to all you men out there who are self-conscious about your penis size. You’re already obsessed with the thing, you might as well love it. Take a tip from Timothy DeLaGhetto in his awesome Asian Guys = Small Penis? video: “If a girl expresses interest in my penis, then I know she wants to play with it. So I’m like hey, it’s not big, but you’re going to like it, it’s gonna taste good. And then nine times out of 10, she’s going to end up sitting on the penis.”