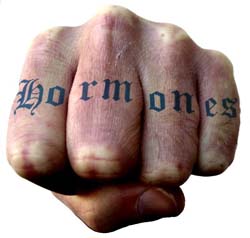 If you were to distribute a tablespoon of testosterone to a lecture hall full of young men, you’d have yourself a gang of lunatics chasing and humping everything that moves, my professor said. From that day forward, sex hormones had my full appreciation.
Much is made and more is known about a woman’s hormonal milieu. From puberty, aunt flow and pregnancy to orgasm, desire and menopause, the female animal has generally captured our attention as much as sex and reproduction are concerned.

Men on the other hand were traditionally thought to operate by a simpler owner’s manual. Testosterone, the male sex hormone, was responsible for the development of secondary sex characteristics like facial hair, increased muscle mass and a deeper voice. All this manliness was also associated with sex drive and aggression, as my college professor colorfully pointed out, but after a man had reached adulthood, not much thought was given to the rest of his hormonal self.

Sure, we’ve blame the “macho” hormone for a host of social and personal ills like criminality and commitment phobia, all along offering nary a thought that maybe men had more going on, endocrine-wise, than we were giving them credit for.

If you are guilty as charge, find atonement in that fact that science is finally filling in the gap. We now know that the hormonal roller coaster can also be a man’s domain (sorry fellas) for intriguing reasons. What’s more, testosterone levels are an indicator of many things, though not necessarily what you may be thinking.

Born to be Dad

Traditional models of human behavior have portrayed women as the family caretakers with men leaving the hearth to grunt and hunt. This prism views modern fatherhood, in which a man is an active and nurturing participant in his child’s life, as somehow ‘unnatural’ or at odds with his primal disposition. Turns out, this may not be accurate.

“Men are, to a certain degree, hardwired to take care of their kids,” explained Lee Gettler, professor at Northwestern University and co-author of a new research that tested hormone levels in men both before and after they became fathers. The study, which followed over 600 men in the Philippines, found that men go through a biological transition when doody calls.

They confirmed that men with higher testosterone levels were most likely to become fathers. Unexpectedly, after their babies were born, these new dads had the lowest average testosterone levels of any group in the study, even lower than their single counterparts who started lower and didn’t have children during the course of this study.

These variations suggest in ways previously unknown that men are born to be dads. In part, this is because lower levels boost behaviors that are good for parenting – nurturing, holding, feeding, soothing, burping, diapering, etc. - and keep a man focused on his offspring instead of competing for a mate, explained the researchers. Successful daddy hood tends to correlate with fewer stolen hearts and more stolen naps, with the dreaded drop in sex life often a woeful (though not necessarily permanent) consequence.

Help! My Sex Life Has Fallen and Can’t Get Up

On the other hand, all that time spent taking care of baby encourages a man to spend more time…taking care of baby. Lower testosterone could influence the amount of time a man spends with his family, by tempering bad boy party urges.

“When fathers make this choice, this active decision to be involved, testosterone reacts to that by going down even further,” Gettler said. “Their bodies respond by saying, ‘this is where we are focused now, we are focused on the kids.’”

For any would-be papas, have no fear. There’s an acceptably safe range of male sex hormones with which to frolic and propagate. If your gonads still feel a bit pickled after reading this bit, it may help to know that testosterone levels returned to pre-baby levels — kind of like your wife’s body — by the time your kidlet starts walking, says Louann Brizendine, the author of The Male Brain (Broadway Books, 2011).

This ‘daddy mode’ is thought to go something like this. First, levels of cortisol — the hormone that regulates the fight or flight response — tend to spike about four to six weeks after a man learns he’s going to be changing nappies in the very near future. This sudden increase is likely to correlate to the panicky feeling many dads-to-be experience, and it goes away as his partner’s pregnancy progresses.

Consider that human babies need help longer than any other known species (and it doesn’t stop at 18, or so I’ve been told), it makes sense that fathers’ hormones fluctuate in ways that encourage survival and dual parental care. What’s a little more odd, and still unexplained according to an interview with Brizendine is why a man’s supply of prolactin — the hormone that helps moms make milk — rises as his testosterone falls.

There’s even more to the ‘daddy mode’ than meets the eye, however, including what — or rather who — may be in charge on all these fluctuations.

Babies are somehow exerting an influence on fathers, but how? Some scientists point the finger to pheromones. Pheromones are airborne chemical messengers secreted by skin and sweat glands that are not detectable to our conscious brain but somehow manage to regulate hormonal changes nonetheless (the classic example is of women living together in close quarters who start to menstruate at the same time).

One scenario is that the baby is in control from the time of conception by controlling the mother’s hormones, which in turn influence the father’s. If so, it’s possible that pheromones trigger a cascade of hormonal changes in a man’s brain to help prepare him for fatherhood.