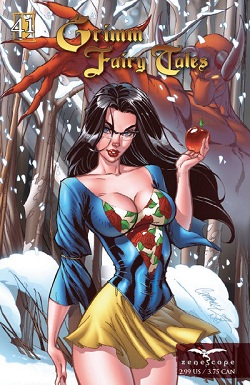 J. Scott Campbell
Life in the Middle Ages was hard: Famine. Bubonic plague. The ever-present threat of witch burning. Even when the drama was minimal, generally speaking, you were filthy and crawling with parasites while you worked yourself to an early grave. “The kids’ stories we know now were the NC-17 escapist fare of the day, rife with sex and violence,” explains James B., who teaches a variety of literature classes at a small college in rural Washington. “They were the great grandparents of the horror movie, the fantasy genre, the comic book.”

Though G-Rated Disney fare has long been a sacred cash cow for Hollywood, the deeper naughty and very adult implications of fairy tales is something that has been lost on current auteurs. This year’s “Red Riding Hood,” which balances the primordial menace of the beast with a beautiful young woman’s sexual awakening, was one of the first in a coming string of classic fairy tale-inspired films that have been repackaged for older audiences. Soon, we’ll have two versions of “Snow White” with Charlize Theron and Julia Roberts each starring as the treacherous queen, a contemporary take on “Jack and the Beanstalk,” and a dark spin on “Pinocchio.” With Guillermo del Toro directing, I’ll be eager to see what wicked endeavors they script for that legendary proboscis.

“These kinks and fetishes aren’t concepts that came about with the advent of the camera,” says James. “Many of these ‘immoral’ practices have been going on for millennia.” 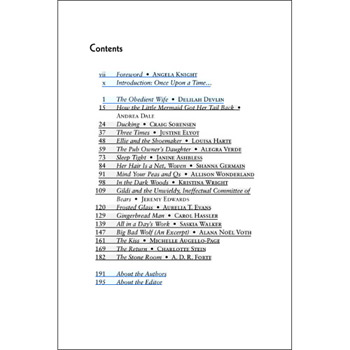 He awoke in his own bed, with the memory of his night in the stone room as raw as his skin. His hands moved to touch the sheathed blade that had betrayed him so spectacularly, and he tensed again at the remembrance. Blissful agony.

"I will call you," the wise woman had said, her gaze hidden behind the tangle of dark hair as she led him up the stairs and left him to find his way through rooms that passed in a blur to the night outside.

He understood. One night only was not enough for the enchantment. It demanded he abandon every shred of self, every trace of pride, all pretense of control.

Curled among cool sheets with his arms about a pillow of softest goose-feathers encased in the finest Egyptian cotton, he knew at last what he feared.

When he returned to the room of stone, the giant bound a cloth of black over his eyes and cuffed his hands and his throat. The giant and the wise woman snapped teeth of steel into his flesh: his nipples, the skin of his balls. He gasped, and they forced a ball of rubber between his lips before they took him, blind and bare, up the stairs and away. Some far distance that he could neither see nor measure, and into the heat of a crowded place.

Here, exclamations of surprise and delight greeted him. Hands pulled at him, pinched and tugged and twisted until his flesh hurt in a hundred places. The ball was taken from his mouth and unseen mouths kissed his, laughing. Invisible hands slapped his bare ass, jiggled the cruel clips in his flesh.

They made him kneel and his mouth served them: men and women, hard as stone, soft as silk.

Oh. What a lovely toy.

Wherever did you find him?

They whipped him again and broke his skin with their nails, but he suffered it all with not a word, until his stiff, aching body could scarcely move. Without thinking, he followed the lead of the hand that guided him to the depths of a soft bed. Through blurry, throbbing eyes he saw the face of the wise woman as she lifted the cloth from his eyes.

Exhausted, he slept the dreamless sleep of the used.

Who You Calling Princess?

It’s an idea that’s not at all lost on Ralph Tedesco, editor-in-chief and co-founder of Zenescope Entertainment, which produces the successful “Grimm’s Fairy Tale” comic book series, though he describes the content between its racy covers as decidedly PG-13.

GFT’s heroine is the comely Sela Mathers. A velvet ribbon tying the stories together, Sela is smart (clearly indicated by the glasses she wears with whatever bustier, negligee or saucy wench costume she is packed into) and has the ability to counsel characters in crisis via an enchanted book, pulling them into a fairy-tale world. “As the story unfolds, it shows them how their dilemma relates to that particular tale,” says Tedesco, who writes much of the series. “Many demonstrate how the character within doesn’t make the right decisions and faces some horrifying consequences.”

The stories tackle some heavy issues. The “Cinderella” story dealt with bullying. “Red Riding Hood” is a young girl whose boyfriend is pressuring her to have sex. “Hansel & Gretel” were potential runaways, while Jack, of beanstalk fame, is a drug dealer.

It might be a stretch to call the series a slick, beautifully illustrated new take on the ’70s-era after-school special, but Tedesco notes that they have a significant female following for a product whose marketing segment is primarily males 18 to 34. “It’s a growing fan base,” he says. “I see it in the women who come to the conventions, who like our Facebook page, who write in.”

He cites a storyline from their “Beauty & the Beast” comic in which a young woman in an abusive relationship overcomes her situation. “Many of our stories are, if unintentionally, female empowerment stories.”

The Zenescope team sees the value in knowing its roots. Readers familiar with earlier adaptations of the classics will notice nods to the bloodline. “In one of the older versions of Cinderella, the stepsisters have their eyes pecked by crows,” Tedesco notes. “We retain that in ours, a small homage.”

And This Bed is Just Right

As a longtime horror buff, I roll my eyes at all the graphs and charts saying I don’t belong in the demographic. Author Kristina Wright falls under a similar heading. “When I was growing up,” she says, “I was the only girl I knew who read comic books.” She preferred the darker storylines: the Dark Knight, vampires, stories that blurred the lines of good and evil.

“Although the romantic-relationship elements of fairy tales often overshadow the quest aspects while comic books tend to slant the opposite way, as a woman I’m not sure how I feel about the idea that [comics] are for men … I think a good story is going to appeal to an interested reader regardless of gender.”

Or orientation. Mitzi Szereto’s In Sleeping Beauty’s Bed has found many a fan in the gay community and she is delighted to have them. “I never think in terms of gender when I write,” says the woman who’s “The Turnip” – the tale of a modest farmer who finds both blessing and curse in the elephantine root vegetable growing from his groin – brought down the house during a reading at a London literary event at the Royal Festival Hall.

Szereto suspects comic books have been a format giving male readers “permission” to read fairy stories. “Many potential male readers might be put off by the whole fairy tale idea,” she says, noting that the product marketing tends to target women. “I think that’s unfortunate… I’m very proud of the fact that the title has been well received by a diverse readership.”

“eHarmony’s always going to have its place,” observes James. “And I still overhear more female students discussing ‘relationships’ while the boys talk about ‘hooking up,’ but speaking from a male’s perspective, a lot of that comes down to young men posturing for one another, anyway. Women might enjoy imagining themselves in the role of helpless princess in need of a savior, but I think that might be as much a fantasy as placing yourself in a Tolkien-style battle with a shield and a sword so massive no one outside a comic book could lift it.”

For those who revel in sexualized fairy tales, there’s a plethora of material rife with lovely, lusty lasses who could give any of the fandom universe’s favorite sex symbols – “Avatar’s” Neytiri, “Star Trek’s” Seven-of-Nine, Lucy Lawless’s Xena – quite a run for the daydreams of their many admirers. Plus, they put out. But, ultimately, Mother Goose and her brethren are safe and familiar. And so erotica, deftly dissolved into a fairy-tale format might be Baby Bear’s porridge – making things just right for those less likely to indulge in the pleasure of carnal reading to take the plunge.

“It’s the form of literature most of us were weaned on, regardless of where we’re from,” says Szereto. “This alone gives it special appeal. There’s a comfort in the familiar, a sense that it’s okay to pursue it.” On a more simplistic level, she theorizes, it’s simply fun. “And who doesn’t enjoy a bit of fun now and again?”

Whether your handsome prince is straight out of Disney, with a coach and a palace and the promise of marriage, or a leather-bound slave satyr who loves the sting of the whip – or perhaps a creature who’s the former by day and the latter by night – there’s no boundaries in the realm of the faerie.
After all, the phrase “happy ending” has more than one definition.
Tags:
Views: 2231