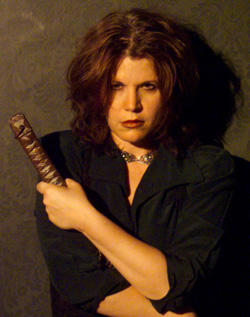 She’s been the voice of several adult video games, sold her work to various adult stores and catalogues, and is the CEO of the adult Internet radio station RadioDentata.com, a 24/7 adult feed featuring music programming, cooking shows and interviews with romance authors and adult marketing people.

Chicken or the egg…Did you start out as a performer or a writer?

I was an artist with my own studio. With the onset of computers, I became a software trainer, concentrating on ad agencies and photo retouching. One day, I answered an ad to be the voice of a software program. The project lasted a while, and I got a little sexy with some of it. The CEO of the company packaged the programs, and they actually sold well…which lead to fan mail. From there, the idea was born for a set of stories from me to my online love, which I spent six months writing and recording. Before releasing it, we tested to a market of truck drivers and military men, got great feedback, than eventually released the CD Dreams and Bedtime Stories. When I put up a website the fan mail became personal, both men and women, sometimes couples were looking for fantasies, advice and more. So, I had a reason to really start writing…and recording.

The www.sensualwords.com stuff is work for hire, right?

Yes, the pieces on sensualwords are all custom written. A client goes to the website, fills out a general form, general questions about their certain turn-ons and turn-offs, words they like, words they don’t—specifics about the characters they want. Oceania is the main character in the story, but if they want her to have a certain body type or ethnicity, be dom or sub, or speak with a specific accent—whatever they want to be molded into the story—they tell me.

And the stories themselves…How do you actually write for an audio medium?

To really touch the nerve—aurally—you need to get into a person’s head with the words, the sound of their desires. To begin with, I usually take a scenario and create the mood. Sometimes I have to test the situations, say like rope tying and positions…I really do love the research. (laughs) Sometimes the writing may take five to seven days for a 30 minutes piece, sometimes just a few hours.

What do you find works better for audio: first, second or third person?

Most of the time, they’re in third person, past tense. I come at the action as if I’m relating something that the client and I have already experienced, reliving it… especially with my regular customers. I guess that way, they want to come back and again and again to see what we’ve experienced, what [the next] escapade will be about.

You’re the performer too, so when do you actually record what you’ve written?

Well, you have to understand, I don’t straight read; I don’t record the first time I read the story through. Yes, I wrote it, so I know what’s going to happen, but I still read it out loud to myself three or four times making sure I catch just the right breath and emphasis before I actually set up to record. I ad-lib, improvise, become one with the character and the motivation. Then I let technology do its thing and I do mine.

Is it a one-woman show?

Sometimes I read stuff that I haven’t written, or hire a voice actress to read my work.
I once had a client who said he wanted a blonde to read my story, and since I didn’t “sound” blonde to him—and he was right, I’m not blonde—I had to find a girl who sounded blonde to him. I did get one—but in actuality, she wasn’t blonde either! (laughs)

How lucrative is the market for this kind of work?

The A.P.A (Audio Publishers Association) estimates that the total size of the audio book industry—based on the dollars spent by consumers and libraries—is close to $1 billion. So, yes, audio erotica is definitely a seller.

How do you get a listener to really experience what you do with all five senses?

Well, I think each sense is served by the auditory medium differently. Obviously, hearing, sound is the one most used here. I can only hint at the rest of the senses. For instance, I have a customer who is a foot fetishist, so I describe the smell of the leather and things like that. If I’m going for the tactile or touch of a piece, I might describe how I’d rip your shirt open and have the buttons pop off, then rake my nails across your chest and tickle your nipples. As far as [the sense of] taste goes, my stories are not very often about food-play, there are other writers/performers that can and do deliver to that fetish better than I, but I could get into it, say, describing how a ball-gag tastes, for instance.

I find each niche or desire certainly has its own pattern and specials requirements. It’s really cool if the stuff I am asked to create plays to things I like.
Tags:
Views: 1410
Related articles

RalphieGuy
freelance writer living in the wilds of nj suburbia