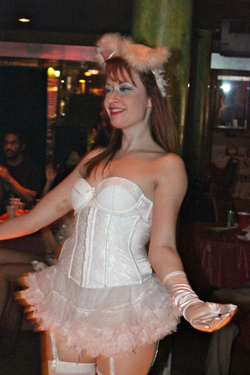 Femme 6—burlesque dancer from Jumbo's Clown Room in Hollywood
Those walking into The Grand Star Jazz Club in Los Angeles’ historic Chinatown district on January 27th were in for a special treat. Upon entrance they were greeted by Cleo and Jessie Nicole, two drop dead gorgeous hostesses in tight black dresses and heels.
Once in the dark and smoky club it was impossible to take your eyes off of Mariko Passion, who writhed around on stage in six-inch patent leather platform heels and a form-fitting gold dress crooning standards with her backup jazz band. It wasn’t just another night at The Grand Star; it was the Chow Fun Burlesque Cabaret, an event organized by local sex workers. A table next to the entrance offered porn DVDs, a “Tricks of the Trade” pamphlet featuring health and safety tips for street sex workers, panties, and old issues of $pread Magazine. Cleo gives massages that result in happy endings and at just 24, Nicole is worlds away from her former life in Chicago where she worked as a high—end escort in order to pay her tuition. As is often the case with sex work, nothing is what it seems.

The most common depiction of a sex worker in popular cultural is the down and out, victimized, street walker who needs saving. Interestingly enough, only ten percent of the entire sex industry is comprised of street sex workers and thanks to a “Whore Revolution” being waged by industry activists like Emi Koyama and Passion, they don’t need your saving. What they do need; however, is your support in their fight for rights, respect, and the ability to do their work without prejudice. 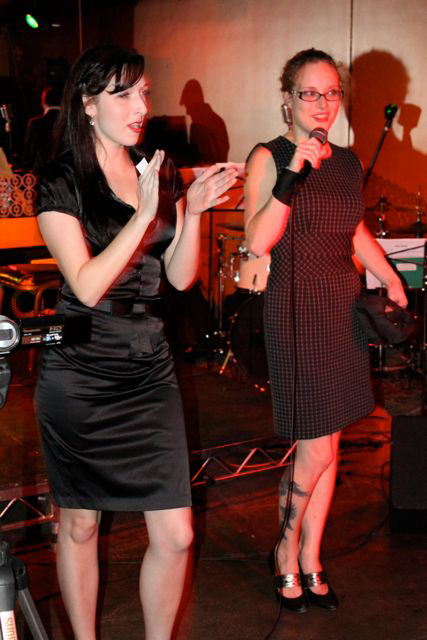 Jessie Nicole, the current director of SWOP-LA.(lft) with another SWOP-LA member.

Passion, who organized the Chow Fun event, is a lot of things to a lot of people. She is a singer/performer, an artist, a fearless activist, and to her clients, she is a provider of pleasure. Passion is a professional sex worker, an escort, to be exact. Once a twenty-two-year-old “prude stripper” dancing in San Francisco, Passion would routinely deal with strip-club patrons who offered her money for extra services, but each time she declined. Though she supported sex workers, at the time, Passion was anti-prostitution; she believed the profession to be exploitative of women. It wasn’t until she began exchanging e-mails with a sex worker/activist that her opinions changed. Once she moved to Los Angeles, her boundaries slowly melted away. Soon she was an outcall stripper for bachelor parties, which slowly morphed into a live sex show she’d perform with a partner at private events. Eventually, Passion would become a full-service escort, but not before experimenting as a dominatrix first.

“I had one sex job at a time and I was very conscious of the evolution,” Passion said. “I always make sure I’m ready—and comfortable—with everything I do. Every time I’ve ever been propositioned for new things, I’m sure to consider all of the consequences. Sex work is like accelerated dating; many of the same dynamics of dating are played out and just like dating, you don’t want to be pushed to do anything you’re uncomfortable with or anything that makes you unhappy.” 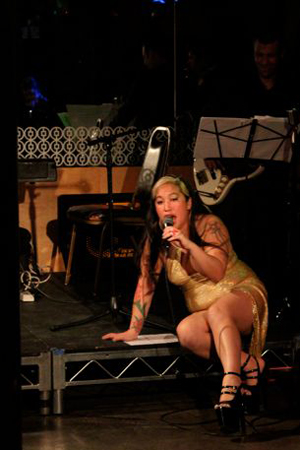 Mariko Passion, an activist, sex worker, and artist performs with her jazz band.

While attending graduate school at UCLA, Passion became aware of the Sex Workers Outreach Project (SWOP), a national, social-justice network dedicated to the fundamental human rights of sex workers and their communities. The group focuses on ending violence and stigma through education and advocacy. In 2004, Passion started the first ever Los Angeles branch (SWOP-UCLA). After graduating with a degree in social justice education, she formed SWOP-LA in December of 2006 with the goal of expanding the group’s reach beyond the privileged university community. Running a non-profit while pursuing various artistic endeavors and working as an on-call escort proved to be difficult, so SWOP-LA lay dormant for a few years until Passion recently handed the title of director over to Nicole, who originally heard of SWOP while living in Chicago. The Chicago branch of SWOP has been wildly successful at raising funds and awareness by organizing monthly gatherings. So, as many other SWOP chapters have done, Nicole is modeling SWOP-LA after Chicago. The Chow Fun Burlesque Cabaret was the Los Angeles chapter’s first attempt at a monthly fundraising event.

“For now, we’re mostly focused on building a community for sex workers in Los Angeles,” Nicole said. “When your line of work is so stigmatized, it’s important to have people to talk to who know what you’re going through and understand where you’re coming from. Hopefully through these events, we can make it clear that sex workers are people too, which is sadly, far more radical a thought than you’d think. Sex workers rights are human rights and like everyone else, we don’t want to get beaten, robbed, or raped at our jobs.”

Passion, who writes openly about her experiences as a sex worker on her blog, is quick to point out that the fight for sex workers’ rights also benefits those receiving services.

“Clients aren’t going to be openly supportive, but they’re part of the cause,” Passion said. “It’s a risky profession for clients and sex workers and the sooner it’s decriminalized, the more safe it will be for everyone involved.”

Through monthly gatherings, events, and through the use of social networking sites like Meet Up and Facebook, Passion hopes the newly vamped SWOP-LA will succeed at building a community of sex workers who are empowered activists, but she’s not sure how accepting Angelenos will be.

“A lot of the sex worker stereotypes in society were born as a result of mainstream Hollywood movies and I think the victim mentality is most common in Los Angeles,” Passion said. “Before, SWOP was about giving a voice to the voiceless, but more women are beginning to own their profession in this industry and become empowered and unashamed. People here want to talk about saving us; they want to save the victim, but we’re not interested in that. When you take it out of the paradigm people are comfortable with, you become very inconvenient.”

This new revolution of empowered, self-described feminist, sex workers is uniquely third wave. Second wave feminists were strong in their beliefs that the sex industry was inherently demeaning and did little more than harbor abuse victims. Radical feminist and former sex worker Andrea Dworkin went as far as to link pornography to rape and famously said that prostitution is an abuse of a woman's body and that “in prostitution, no woman stays whole."

Admittedly, many sex workers have their horror stories to tell and even Passion, who says she “really loves” her job, has been robbed and assaulted in the past. But rather than seeing these as indicators of a damaging profession, Passion and other activists like her are “being the change they want to see” in the industry. From getting clients to treat sex workers with more respect to using their jobs as a way of working through old trauma, they are the catalyst for change.
Tags:
Views: 1703