Las Vegas Renaissance: Putting the Sin Back Into Sin City 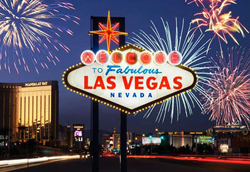 When we heard Sin City had been “saved” a while back, we were skeptical. Like a full-on Disney experiment, when the town was invaded by a troupe of G-rated “Marketeers” who left in their wake a trail of daycare centers, Barney in-room TV marathons, and other sundry kid-friendly attractions, we shuddered.
But as a city built on more earthy roots, the town’s fleshier possibilities could not be eradicated so easily. Though it was awhile in coming, Vegas eventually ditched the kiddie menu and is once more taking its rightful place as the world’s brightest and bawdiest adult playground. Thank gawd.

From sexy Cirque du Soleil shows like Zumanity to burlesque theater and industrial-size gentlemen clubs, casinos with stripper poles that feature bikini-clad dancers set behind gaming tables, where barely clothed croupiers deal a hot hand, Euro-style celebrity infused swimming pools where topless is in fashion, DJs blast and bartenders pour, the neon desert now pulses with a nightclub vibe in the heat of the noonday sun.

Compared to a year ago, there’s been an explosion of sidewalk hucksters, relentless touts forming a street phalanx, tirelessly pressing glossy cards into any palm. Accompanied by the promise of free drinks and limo rides, the handouts pop with big, pendulous, bare busts, or bikinied women with permanent pouts in the most provocative poses possible. Like “stripper baseball cards,” some even have stats.

While there are topless performers of stage and pole by the boatload and enough high-priced silicone to raise the Titanic Vegas is oddly bereft of serious sinning. (We looked!) If you’re looking for a bawdy place to drink, gamble, dine out, play dress up or strip down, Vegas has the bases covered, but be advised, ordering up a “Tiger Special” from room service can be a little risky, very expensive, and curiously illegal. Cathouses are licensed and legal in Nevada—just not in Las Vegas or the rest of Clark County—which may be the state’s concession to public decency.

Despite all the hard bodies, hedonistic play and lusty images spun from the “What Happens in Vegas Stays in Vegas” campaign, the slogan is not a promise, but the perfect tease. Shed your inhibitions, smile, and sin like you’ve never sinned at home. Vegas.com, the city’s official visitor site, lists at least five almost “anything goes” venues for swingers who want to take “adult” to the nth degree, and each year (along with L.A.), the city hosts one of two annual Adultcon Expos. (The next event is scheduled for November 3-4, 2011.)
The Vegas renaissance was reportedly kick-started by traveling businessmen, who winked and whispered giddy tales of a wicked oasis, a guilt-free Gomorrah where bad behavior had found a happy home. Whether or not it’s the stuff of urban legend, Vegas got the nod as the crossroads of sin and covert fun, things dared and done you didn’t want your significant other, or mom, priest, rabbi or best friend to know about.
Banking on the great commercial power of forbidden taboos, the “Happens/Stays” mantra, now in its eighth year, has created a kind of rapscallions’ refuge where, for a few days, visitors can take a break from the workaday world, indulge in an anonymous Vegas persona, live a guiltless fantasy, forget fears and feed secret sultry desires free from conscience or consequence. It’s this seductive, sexed-up sense of harmless play Vegas is banking on.

A Guide to Sin City Shows

Pent-up passion for fun and fantasy continue to attract more tourists and thrill seekers to Vegas each year. The town has a true knack for taking temptation and making it more persuasive by rolling it up into glitzy, tasty packages, with a growing number of treats restricted to 18 and over. For those seeking something less obvious, but still titillating, Vegas hosts a steamy array of NC-17 entertainments that still pack a palpable tease. Some of our favorites include:

Dorian Darque
The excommunicated Right Reverend Dorian Darque, whereabouts unknown, is reported to be in the witness protection program. He was last seen meditating naked on a Sedona vortex, mumbling in tongues. Messages, and donations to resurrect his traveling gospel show, can be left at joshua1@npgcable.com

Other articles by Dorian Darque