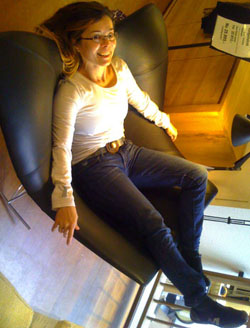 It was the sort of horror that’s only possible on late night cable. An hour-long shopping show dedicated to cheap sex toys. If QVC was a trailer trash mama, we just met her slutty little sister trying oh-so-hard to be Hollywood classy. This was Bristol-Jamie-Lynn capitalism and Sex-In-The-City-knockoff sexual liberation.
The giant, pink, jelly rabbit loomed above me in the darkness like a nightmare version of Macy’s Thanksgiving parade animals. It’s ears quivered as the shaft rotated in a grotesque burlesque of cheap vinyl fleshiness, filling the entire frame of the giant plasma screen. An overly painted blonde hands it off to another virtually identical blonde. They giggle. Then they bring out another toy—a black-jelly, male-masturbation sleeve with vibrating suction.

My brow knitted and my mouth agape, my face is stuck in state of bewilderment tinged with horror. I ought to change the channel but this train-wreck of a program has me riveted.

During the horrifying half-segment the words “fun” must have been used at least 327 times. Weirdly, no anatomical terms were used except for one use of “clitoral”, where upon the blonde who uttered it suddenly got a bit wobbly around the plastic perma-grin. She also slipped and said “anal” once. Followed by another bit of wobbly Botox lips. She may have said “G-spot,” but perhaps that’s considered mysterious enough to not count as an actual portion of the reproductive system. It was almost awe inspiring to watch them spend a full hour talking about sex toys but never actually talking about sex, how they’re used, or the body parts that they’d be used on, around or in.

“Cunt! Pussy! Vulva! Yoni! Vagina! Penis! Cock! Dick! Balls! Prostate! Say it! Just Say IT!” I would have been shouting this at the screen, if I hadn’t been frozen in utter disbelief. The only reason they’d pussy foot around pussy on a late night cable is the management or producer’s profound discomfort over the acceptability of proper anatomical terms and honest discussion of sexuality. That’s a whole lot of sexual shame and baggage. That’s not the message I want from people who are trying to sell me things to stick up in my unmentionables.

If I’m to understand their marketing correctly, merely by buying these fun items from their fun store by calling their fun women-only phone line with their fun operators standing by I will regain fun in my life and spices will appear in my bedroom, though what I’m doing in the bedroom with spices were never made clear. What I do with these fun things, once I buy them, seemed utterly irrelevant, but it was certain to improve my relationship. I’m relieved to learn that by reinstating my fun quotient through the possession of their talismanic object I will be made whole once again from a state of incompleteness I was entirely unaware off.

If I hadn’t been nailed to the sofa in a state of cognitive trauma, I would have called the women-only order line, just to find out why having that was such a great act of customer service and sensitivity. Was there some state of unwholesomeness to operators who have spoken to male customers in the past? In Tokyo they have women only train cars during rush hours to allow women to avoid creepy gropers. Would I somehow be groped through a phone line? Or do they actually think that ordering a hot pink butt plug from, gasp, a male customer service agent will disturb female customers?

Gee, that’s so much fun.

Fortunately I snapped out of the revulsion induced temporary paralysis and found something far more realistic and believable to watch—Dr. Who reruns.
Tags:
Views: 1649
Related articles