Benefits to being sexy: Pole dancing is good for your health. 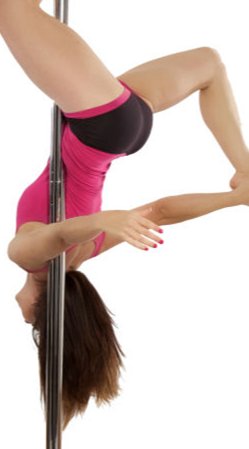 Gemin http://blog.polefitnessworld.com/pole-skivvies-pole-dancing-clothes/
Pole dancing goes beyond sexy. It is good for your mind and body. On top of that it make you feel sexier than ever!

We all know that pole dancing is sexy, but did you also know that it's good for you? Historically speaking, it hasn't been strictly a female sport, either. Here in the 20th century it's becoming more unisex then ever. The sport (yes I said sport!) over the last twenty years has been reclaimed by both genders. It has begun to lose its sexual tone and become something more, turning it from something practiced in clubs to something done in gyms, competitions and bachelorette parties. There are worldwide Pole Dance competitions that judge based on choreography, creativity, execution of tricks, flexibility, grace, posture and transition of tricks. Gyms and dance classes are offered to both genders. China's Zhang Peng, 23, beat several female dancers and took the national prize in 2007.

The practice of pole dancing has been around for more than a thousand years, and done in many cultures. In 12th-century China the pole was used for male acrobats during performance and training. For more than eight hundred years in India they used the pole to train wrestlers. Yeah, you heard me, wrestlers. It was called “Mallakhamb” and that literally translates to the wrestler of the pole ( Malla meaning wrestler and Khamb meaning of a pole). During the 1920s it was a popular circus act in the United States, where acrobats leapt between one pole and the next in color costume. It wasn't until the 1980s it became popular in burlesque and erotic dance in the States. It wasn't until the 1990s that it became a fitness trend. Today people work toward standardizing the rules of Pole Dancing so that in the future it could become an Olympic Sport.

So it is obvious that pole dancing can be more than just strip tease and sexiness. It can be about your physical and mental health, your self-esteem and sexiness. It can help make you stronger, more fit, and help you embrace your own inner goddess. The physical and mental health results, like most good exercise, are achieved through exercise regimens of thirty minutes a day, three days a week, but pole dancing is a lot more fun than most exercise regimens. I personally recommend top hits of the 80s and a few of your friends for best results. Some of the benefits include increased muscle mass, a bump in your metabolism, better bone density, improved joint elasticity, reduced everyday pain, stress, anxiety, depression and a good old dose of confidence and self-esteem, not to mention all the sexy you will be feeling.

As we age our appetite and muscle mass decreases, with it our metabolism falls. The average forty-year-old woman will gain between twenty and thirty-five pounds by the time she is fifty due to this drop off in metabolism. This drop can be counteracted by staying active, cutting calories, and working to build new muscle. When cutting calories and starting an exercise regimen one should always be careful to be sure they are getting adequate nutrition and fuel for every day. Pole dancing uses a person's own body weight as the resisting force. Exercise that uses natural resistance creates long, lean, and sexy muscle, and not bulk. It also reduces the risk of strains and pulled muscles. With new muscle comes new metabolism. Yes, pole dancing can actually help kick your metabolism into gear. The best way to prevent long-term osteoporosis, and maintain good bone health, is by getting enough calcium and doing weight-bearing exercise. Pole dancing with its lunges, lifts, and poll holds are all about weight-bearing exercise. With leaps and lunges pole dancing tricks are particularity good for bone health. A full thirty minute dance session is the perfect cardio work out, getting your heart beating at peak performance. Before every exercise it is recommended to stretch, increasing joint elasticity. By strengthening the muscles around your joints you increase joint stability. This leads to better posture, less joint pain and increased mobility in all ages. All of this also increases hand eye coordination and balance. Now for the real challenge? Do it in heels.

During rigorous exercise, the body naturally produces chemicals called endorphins. Endorphins are naturally pain relieving and also help fight feelings of depression and anxiety. Getting a good workout means you can sleep better at night, feeling better the next day.