SexIs Subjective: It'd Be Easier To Love Our Bodies If It Weren't For Other People. 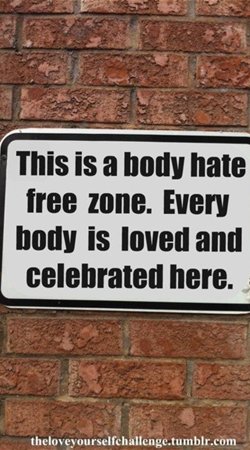 Everyone wants to love their body, it's just that everyone has a different method. Some accept their body as is, rejecting society's perception of beauty. Others work tirelessly to conform, and still more find a different path. What nearly everyone is saying, through all their work, is that people should stop judging based solely on appearance.
Body image is an idea I’ve opined in the past for an important reason; it pervades every aspect of society. Appearance is the first information available to the world, and studies suggest that first impressions tint future interactions. “Fat acceptance,” “thinspiration” and “fit is the new skinny” are all manners of coping with societal judgment and also reveal our perceptions of society.

While its meaning may be distorted by evangelicals and detractors, the core message of fat acceptance is a rejection of society’s judgment. Being fat carries with it a litany of labels, such as being lazy, unhealthy, unattractive, slow, or simply immoral, but these labels aren’t based upon fact. Few people, fat or otherwise, are judged by those who know our medical chart, diet, exercise regimen, lifestyles or personalities, yet judgment remains.

Fat acceptance means rejecting ill-informed societal scorn and accepting your body as you want it, no one else. In this way, it may be the most idealistic of the three statements, hoping for a society where people base opinions on actual data and facts, rather than looks and initial impressions. A person’s body is their own business, not something to be judged by the world.

If fat acceptance is the most idealistic of the three, thinspiration is the most realistic. Regardless of a person’s acceptance of their body, judgment still exists and at times can be quite powerful. Fat people have everything from health, career and relationship problems blamed on their weight, oftentimes unfairly and inaccurately.

This associated stigma won’t disappear by ignoring or wishing it away, nor will a positive body image help. Further, this stigma may have a detrimental effect on their lives, hindering their goals and happiness. So is it wrong to attempt to avoid the pain of fat scorn? Thinspiration may simply be the rational decision of acclimating to societal pressure for an easier life.

The previous sections dealt with body appearance as it’s inexorably intertwined with the terms, “fat” and “thin,” whereas “fit is the new skinny” tries to bypass the appearance argument altogether. By focusing on health, it allows room for more people on the spectrum than thinspiration, while avoiding those who would latch onto fat acceptance to avoid necessary life changes. Yet fit is the new skinny doesn’t make the scorn disappear, nor does it prevent judgment, as it both declares skinniness desirable and judges the unhealthy.

None of these are perfect philosophies, nor is belief in any of them required, despite everyone fitting into one of the body types. Yet each has its benefits. For the sufferers of fat scorn, it may be a relief to shed the obsession with weight and the appraisals of society. Whereas some may want to avoid that prejudice by conforming. While others still don't think appearance is important, only health. Hopefully everyone, whether they subscribe to these philosophies or not, will allow people to live in their own body without shame.
Tags:
Views: 1278
Related articles