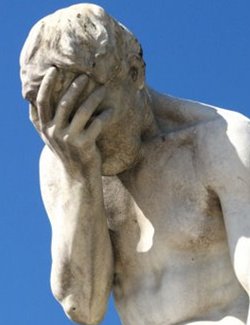 Learn a little about premature ejaculation as well as some possible ways to remedy the situation!

"Jumping to conclusions is like premature ejaculation, only satisfying to the guy doing it, and eventually he stops getting chances to do it."

The definition of Premature Ejaculation is — ejaculation during the early stages of sexual excitement or soon after the insertion of the penis into the vagina.

In this day and age, however, ejaculating too quickly is not desired at all. While in the animal world sex is performed almost entirely to keep the species alive, in humans sex is, more often than not, just for pleasure. A man who doesn't last long in bed isn't generally acceptable. This is for a myriad of reasons, but the foremost being that a man who can't last long won't be able to perform for long enough to bring his partner to orgasm.

There are many causes for premature ejaculation, including but not limited to: stress, anxiety, chemical imbalance, and abnormal penile sensitivity. Let's delve deeper into each of these causes.

Stress in general can cause a man to experience premature ejaculation. This happens because a man is at times incapable of compartmentalizing his life, and has trouble keeping the stress of day to day life separate from the pleasure and/or love with his partner. As such, the focus to "control" ejaculation is decreased due to a man thinking about problems. Even worse are problems in the bedroom which can compound stress issues. High amounts of stress can increase anxiety, the second cause of premature ejaculation.

Anxiety can cause many problems in and of itself, and can grow exponentially with increased stress. Most people deal with small amounts of anxiety on a daily basis, but in those that have trouble dealing with anxiety and stress it can often lead to a plethora of problems. These problems can include: sexual dysfunction, decreased immune system, dietary problems, and any number of mental conditions. These conditions are almost entirely caused by temporary or permanent chemical imbalances, our third cause.

Chemical imbalances in the brain require treatment by a trained professional. There are several neurotransmitters that directly affect sexual function and even very tiny changes in these chemicals can change everything from libido to physical sexual ability — by affecting nerve sensitivity and the ability to orgasm at all. These neurotransmitters are too numerous to list in this article, as doing so would take several pages to explain the functions of each.

In the next section, we'll look at methods of controlling and potentially curing premature ejaculation.

There are several different avenues of treatment for P.E., including medication, lifestyle changes, dietary changes, and even meditation. Each style of treatment has its own specific benefits, but they all can have potential drawbacks.

Tramadol (Ultram, Tramal)- Tramadol is similar to opiates and is approved by the FDA for use as a pain killer. Tramadol has low abuse potential, few side effects, and increases performance time between 4 and 20 fold in over 90 percent of men.

Clomipramine (Anafranil)- Clomipramine is sometimes prescribed to treat PE. One side effect of the drug can help delay ejaculatory response. The side effect is described by the Mayo Clinic as "Increased [sic] sexual ability, desire, drive, or performance."

Other drugs, not explicitly prescribed for P.E. can help, including a number of opiates, and several anti-depressants, though in some cases these drugs can keep a man from ejaculating at all.

Lifestyle changes, dietary changes, and meditation can all be used to overcome stress, in ways that do not involve medication. Simply exercising the stress away, eating healthier, and spending time meditating (which can help you process the stresses of daily life) can directly affect mood and sexual capability. When stress and anxiety are decreased, most people's sex lives improve vastly, and men with P. E. are no different.

If you or the man you love (or have sex with) suffers from P.E., now you know that there are various causes of, and ways to help with, your problem. There is no need to have an unhappy sex life, especially due to premature ejaculation. Talk to your doctor, or do some research for yourself, and you may just find that, after you make a few minor changes, you will be well on your way to a much more fulfilling sex life.

As usual, remember: Sex isn't nasty, and what happens between two consenting adults is their business and their business alone. Never be afraid to ask for what makes you happy!
Tags:
Views: 1572
Related articles